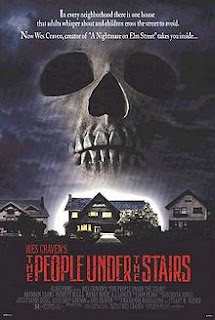 Plot overview:  After learning that he and his family have been evicted from their home in the ghetto, young Poindexter "Fool" Williams (Adams) sets out to rob the large house of his eccentric landlords who only refer to themselves as Mommy (Robie) and Daddy (McGill).  After successfully breaking into the heavily fortified house, Fool realizes that the landlords seem to be more preoccupied with keeping someone - or something - locked in the house.  With the help of the couple's imperiled daughter Alice (Langer), Fool must expose the secret that lurks in the walls and under the stairs of the couple's house.

All day I have been in the mood for a good, old fashioned '80s-style horror.  You know the kind I'm talking about, that mixes real terror with real humor, and sometimes we're not sure whether we should laugh or scream.  In fact, the only thing better than an over-the-top '80s horror is probably a '90s teen slasher.

The People Under the Stairs answered my prayers.  The first thing that really stands out about this movie is the script - these writers must have had so much fun balancing the mystery and terror with a pleasant splash of off-color racial and social commentary.  If I ever had to pick favorite quotes from horror movies (*lightbulb flicks on*), this movie would have at least 5, hands down.  This is one of the reasons we find ourselves coming back to '80s (okay, so this is 1991... same difference) horror, no matter how terrible the makeup or how implausible the deaths: the bigger conflict in this film, aside from all the, uh, mutant-like little boys living in the cellar, is the basic struggle between the ghetto and the burbs (another film I find myself craving to watch after this one) - a tale as old as time.  Or the Industrial Revolution.  Either way, audiences are sure to chuckle throughout this film as one-liners are delivered in perfect doses just before we get our fills of thrills and scares.

The acting keeps us thoroughly entertained throughout, as well.  Many props go to young Adams in the charming role of Fool, a young boy struggling to balance his life and follow the right path.  Obviously with a kid protagonist we should never be scared that he is going to die, so from the get-go we're looking at a relatively happy movie.  The boy's point of view adds a lot of humor to the messed-up adult world he finds himself trapped in, so that along with his one-liners really make for an enjoyable character.  On the other hand, with our crazy and questionably incestuous villains, we are introduced to two characters we love to hate.  Robie is perfect in her role as the strict, unstable, and psychotic Mommy.  I like how uptight she is, and especially how crazed she gets with those bugging eyes during action scenes.  She is wonderfully complimented by the imposing yet apparently submissive Daddy, who McGill portrays as both scary and funny, even in a slapstick manner.  What gets me most about Daddy is his almost singsong way of yelling "I'm going to get you!" etc through the walls.  Creepy stuff.

The set of the big, old house along with its nooks and crannies is pretty neat.  I honestly didn't understand how there seemed to be a second half of the house that was almost closed off, used specifically for Daddy's hunting of Roach (Sean Whalen).  And I know this next criticism is stupid, but it has always irked me that the first entrance Fool finds to get behind the walls is all by itself at this random dead end in a hallway - architecturally it's just such a random space that doesn't make any sense except to serve for providing a neat hiding spot/ escape to be filmed in a movie with the vantage point of the entire hallway in the background.  Either way, the set provides for a fun adventure filled with many chase scenes and narrow escapes.

I enjoy the plot of this movie, more or less.  It's far-fetched, but hey, this is horror.  Apparently Wes Craven read that parents somewhere had locked their kids in the house for long periods of time, and we've heard equally crazy and bizarre stories coming from Austria only a few years ago.  Basically we have a fun mix here of a crazy family, kidnapping, abuse, murder, hidden treasure, and class struggles.  What's there not to love?  The 'people under the stairs,' a group of boys who failed to be perfect children to Mommy and Daddy, are pretty creepy although at the end of the day their makeup is too '80s (think corny) to truly frighten veteran horror moviegoers.  That bit when Roach shows his tongue grosses me out every time, though.

Admittedly, the ending of the film is pretty silly, to say the least.  We go out high on '80s music watching a crowd of evicted, former residents of the ghetto dancing around as it literally rains money - don't forget the abused and mutilated kidnapping victims are escaping through them while they're distracted.  Literally what do these kids think is going to happen to them out in the real world?  Like sorry to say it, but good luck; you're gonna' need it.

Final critique:  I recommend this film to anybody looking to have a good time while also exploring the silent terrors of suburbia.  You really shouldn't be scared by this movie, but that's not to say it doesn't have it's moments.  It's generally a creepy comedy - but even while laughing we find ourselves apprehensive as to what will happen next.  With insane, relentless villains and a young black protagonist with an attitude, this is a little horror gem that came two years too late for the decade in which it truly belongs.