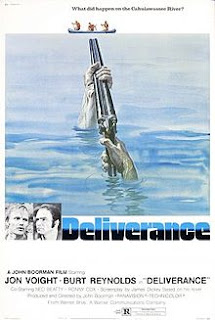 Plot overview:  Planning to embrace a rough, manly weekend on the white waters of the Cahulawassee River in the Georgia backwoods, city boys Ed (Voight), Lewis (Reynolds), Ned (Beatty), and Drew (Cox) and their two canoes head out for adventure.  Shortly after setting off, however, the men learn that neither the river nor its inbred and violent inhabitants are easy obstacles to overcome.  The men must soon fight to survive both nature and the locals while simultaneously questioning the defense tactics used for and against them.

This movie started out and I liked where it was headed.  Immediately I found myself wondering if this was one of the first major films that explored the American boondocks to team the basic concept of getting lost with the horrible idea of violent, inbred, and ill-mannered locals to terrorize modern, gentrified audiences.  In many ways I couldn't help but feel like it was a grown up, more scary and sexual version of Stand By Me.  Well shame on me for expecting any intense, fast-paced horror/action as this is a '70s film and ended up being much more of an adventure with a few thrills than a true horror.  That's not to say I didn't enjoy the film, but I did feel a bit underwhelmed after it ended.  I can enjoy a slow-paced movie, but I feel that this flick really would have been enhanced by some more action.

This movie is pretty well known for its music, or should we say the lack thereof.  In fact, about halfway through the movie I found myself awing at the lack of additional sounds besides the running water and animalistic wilderness.  I loved it.  Also, who doesn't love a little banjo every now at then?  Sound is usually what makes the scariest moments of a horror movie, well, scary.  I have to say that this film did a wonderful job of building up suspense and delivering a few thrills without unnecessary sounds and musical pieces.

This was a very masculine piece of work, stressing not only the varying levels of manliness among the four protagonists, but also the general sense of masculinity that defines, in my opinion, manifest destiny, rough explorations, camping, the outdoors, and America in general (specifically the less-tamed parts).  The River itself is treated as a powerful, merciless, and dynamic character throughout the movie.  Lewis especially has some great lines dealing with this topic, regarding "beating" the river or winning some great "game."  Thus, I think the violation scene in the woods is important because it strips one protagonist of the masculinity which seems so important.  Even though I thought it was really obvious which character would be the victim, and even though at least 3 of the 4 men were already viewed by the locals as emasculated since they are just city folk.

Speaking of, Reynolds did an interesting job as the bulky, brave, and macho Lewis.  The role might be a bit over the top but still important for his attempted connection with nature and role as guide for the group.  I liked the part when he thinks he hears something in the darkness, but upon returning to camp he simply does not know.  Deep.

I liked Voight as Ed, the more quiet and passive but still manly protagonist of the film.  I found this character more easy to relate to as he was usually an easygoing guy - until of course the whole life or death situation springs up and he must hunt humans.  The role is honestly very complex especially since we see most into his conscience during the film's events.  His passivity but ability to act in times of need, plus his hinted drinking bouts, troubles with concentration, and ultimately haunting guilt was all very interesting to me.

I did not like the character Drew and I'm not sure if it was more or less the fault of Ronny Cox.  Drew from the get go was very strange to me; an oddly feminine member of the group (not because of his musical skills, but simply because of Cox's delivery) with very poorly delivered lines.  In fact I found myself getting angry at the awkwardness of his lines.  I'm never a big fan of the character that can't keep his wits about him in a film, so that plus odd, unbelievable lines and a general chickening-out just made me not a big fan!

My other problem with the film comes from awkward script writing both in lines and the general reactions of the characters.  Obviously I've never had to fight my way through a wilderness/ canoe weekend gone wrong, but I didn't think the characters' reactions to sexual assault, murder, digging a shallow grave, burying three bodies, crashing their canoes, and enduring other injuries seemed natural.  There were also too many scenes in which the actors randomly yelled their lines or repeated (while yelling) what the other characters were saying even though no one was far enough away from anyone else to merit the volume or unnecessary repetition.  Okay, so that is just one scene, but I hated it.

Otherwise, I found an especially intense amount of suspense building up towards the film's end, when were are left torn between whether or not the men would be caught or let off.  It wasn't exactly exciting, but it kept me interested beyond the film's major action.  Another good theme I found myself looking for (obviously based off the film's religiously directed title) was religious imagery and symbolism regarding the characters and their deeds.  This added a great depth to the work.

Final critique:  Although this film is slow, it does see some pretty interesting action or at least suspense during its 110 minutes.  The characters are strong and worth following although the acting is not always there and perhaps the script should have been looked at again.  A modern remake that closely maintains the action of this film without adding too much unnecessary gore or drama - yes, I'm talking about a perfect balance of plot maintenance with only some tasteful action - would be really great to watch.  All in all, this film has a lot more than it appears to on its surface.  Imagine how far back this set the South's image!  Count me out of any boys' weekend in the backwoods of America's South or West.