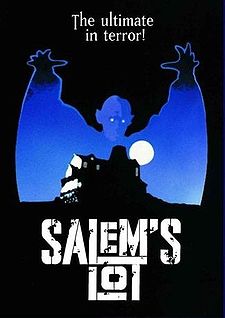 Plot overview:  Upon returning to his hometown of Salem's Lot, Maine, author Ben Mears (Soul) begins noticing weird events plaguing the townspeople.  The occurrences seem to be centered around the old Marsten House - where Ben had a traumatic event as a child - and its new owners the mysterious Mr. Straker (Mason) and the talked-about-but-never-seen Mr. Barlow (Nalder).  As a strange sickness starts coming over more people - marked by strange bites on the neck - it comes down to Ben and the brave but young Mark Petrie (Kerwin) to fight off the evil lurking in the Marsten House.

This was a fun storyline for a creative and well-executed miniseries.  No surprise that it was enjoyable coming from the Stephen King novel of the same name (the protagonist is a writer from Maine... like duh).  '70s aside, it was enjoyable although not the most original plot (vampires invading small town America) - then again, that plot is overkilled throughout the '80s, so if this is the first time it was really done, please let me know.

The characters in this miniseries kept me really interested, and they added a sense of depth such that you might find in a novel.  At first I felt some reservations about Ben, but I grew to like him pretty quickly.  This isn't the only time we've seen a torn or troubled writer in a King novel/ adaptation, nor is it the first time we've seen the theme of a return (to a childhood home, memories, fears).  Mark - acted very well I thought by the young Lance Kerwin - was an interesting character as well, who due to his odd obsession with monsters and horror (!!!) may come off as strange, but ultimately it helps him fight the evil vampires invading Salem's Lot.  Lastly, I found Bonnie Bedelia's performance as love interest Susan Norton to be a breath of fresh air throughout the two-part production.

On the evil side, I think James Mason did just about as well as he could in the role of the creepy, nervous, and often quiet Mr. Straker.  I enjoyed the dynamic approach he employed of not only being evil, heartless, and dangerous, but also perhaps scared of his own partner/ master.  And then we have the face of evil himself: Mr. Barlow.  I really am happy with the Nosferatu approach they took on his makeup and actions.  The various vampires throughout the miniseries were pretty impressive to me, altogether avoiding the almost cheesiness we see in '80s vampires flicks.  The yellow eyes were honestly creepy for me to watch.  The pairing of vampire scenes with good, classic, and basic scary music was well done, resulting in a few frightening sequences.  Again, nothing we haven't seen in other movies, but still just nicely done.  I love the eerie, bald, pale, creepily-fanged vampires.  Enough with the romantic Eastern European guy.  This is scary stuff.  Great makeup; good scenes.

My complaint about Salem's Lot has to do with some awkward or hasty actions in the script/ acting.  First off, I don't understand how (or why) Ben and Susan start dating.  He seemed to be looking for somebody in the park, except they had never met, so I don't get why he stumbled upon her (but seemingly with purpose) in a park, struck up a conversation (about his book), and by the end of the day they are hooking up at ~the lake~.  Like what?  There are just some strange character interactions throughout which left me unconvinced about the final product.  I understand that this is an adaption of the book, which means that a lot of details, plot, and character development had to be left out or modified but still.

My biggest problem comes shortly before the end of the film.  After Ben and Mark successfully kill of the head honcho vampires, I understand that Ben wants to 'purge' the town and completely destroy the house of 'inherent' evil that has affected him since he was a kid.  Now I honestly don't know if I blinked for too long, or maybe I fell asleep for a minute, but as far as I'm concerned Ben broke into the house, saw how all the vampires were locked in that closet in the basement, but he never once saw Susan - am I right?  Then as soon as Barlow is dead he burns down the house and says to himself something like "Sorry, Susan, but it has to be done."  Yeah but like, did he even see her?  Did he even search the house for her?  I for one did not see Susan locked in the basement or turned into a vampire, so I don't know why he burned down the house with her in it.  As soon as the fire started I realized we were about to return to Guatemala and see Susan again, but in the moment I just do not see why he gave up on her so easily.  I hope I missed something, because otherwise that is a huge flaw.

Final critique:  This two part miniseries provides an interesting though somewhat typical vampire plot, and it is only hurt by the inability to develop its characters and plot as much as a novel can.  The acting keeps us locked to the screen pretty much the whole time, and we eagerly anticipate the fun scares and creepy thrills throughout.  Great makeup and good pairing with music results in a well executed thriller.  Recommended for all audiences - I mean heck, it's only PG.