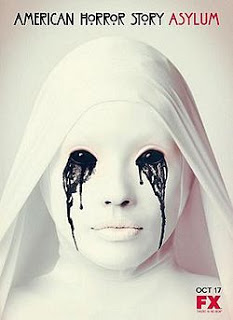 Plot overview:  In the penultimate episode of Season 2, we are given a glimpse into various characters' lives a few years after the original plot.  While trying to maintain a normal life, balancing two wives (Oldford and Brocheré) and two children, Kit (Peters) watches his modern family fall apart due to the pressures of readjusting to life after alien abduction as well as sharing one man.  Lana (Paulson) is steadily reaching her dreams of fame after successfully publishing a book about her ordeal with Bloody Face.  At the same time, however, she faces the truths of the stories she bent, the people she left out of her past, and the promises she has broken.  Lastly, Sister Jude (Lange), now called Betty Drake, slips further from reality as time passes her by in Briarcliff.
Frankly, this episode was excellent.  It did a healthy job of continuing with the rapid changes we were given in the past two installments.  While we were thrown around in time a bit - which caught me off guard more than once - it was interesting to see what life is like for our two released/ escaped protagonists Kit and Lana.  As is custom at this point for American Horror Story, even life outside of the principal evil of this season - Briarcliff - is no fairy tale.  The horror lives not only in the decaying mental institution, but it lingers as well in the homes and bookstores of our everyday lives.  While most of us will never have to worry about ending up in a place like Briarcliff, balancing a polygamous relationship with an axe murderer, or having a psychopathic son, we will deal with the stressors of family life and the temptations of success and fortune.  Isn't this a twisted version of the American Dream?
That being said, excellent acting across the board.  Along with the plot, this made the episode simply fluid- I couldn't believe 43 minutes had passed once it ended.  We had a really nice balance of plots, shuffling between Kit and his family, Kit and Lana, Lana, Jude and her troubles, and Johnny.  There was a subtle terror throughout the episode, highlighted by moments of gore and suspense, particularly featuring an axe and a very unhappy former foster child.  The costumes and props were beautiful, and they helped us understand what careful detail the creators and designers put into this show.  I wasn't alive in the late '60s, but this is how I imagine they looked.  Special shout outs go to Lange who is showing us yet another side of her acting ability, Grossman in the role of Pepper (who has been rather spunky since the aliens granted her speech and collectedness), and Conroy, who was a fun female inmate, with a new accent graced by cigarette smoke.  Great twist in the plot there as well, especially when she blew that kiss.
*SPOILER ALERT*
I don't remember how I felt last time around, but I can't believe that in less than a week Season 2 will be over.  There are quite a few loose ends to tie up, and while we know how certain plots will end (Johnny has to be alive to be Bloody Face in 2012, still roaming B-Cliff), there are still many possibilities remaining (am I stupid at this point to hope for a happy ending for Lana, or a non-suicide route for Kit with the heart of gold?)  What about poor Jude, once the austere figure of brutal authority at Briarcliff, and now perhaps one of its most lost and distant patients?  What will this season teach us about salvation and forgiveness?  I want to think happy thoughts, but after 1.9 seasons of American Horror Story, I am forced to think otherwise.  Either way, we are sure to be in for a treat.
Two things I thought were a bit bizarre.  (1) The sudden promotion and exit of Monsignor - I mean, Cardinal - Howard (Joseph Fiennes).  Obviously we had been set up for that all season, but so soon?  For a second I thought the devil was inside of him following Mary Eunice's death, but he seemed way too sincere saying goodbye to Jude.  Hmm.  (2) Alma?  Really?  I didn't think the sweetheart had it in her to suddenly grab an axe and out the axe murderess.  Looks like Kit does look for something common in his women.  Anyhow, her dead body looked pretty interesting with all that green and yellow.  "Her heart just stopped" - sounds like the aliens might have had something to do with this.
Final critique:  One week left until Murphy and Falchuk have to wrap up another baby.  That means within a few months we'll start getting hints about Season 3!  But let's not get ahead of ourselves.  We still have the guilty-yet-pure-hearted Jude lost in a timeless, seemingly hopeless insane asylum, Lana who has a promise to fulfill, Kit with his own conscience, and Johnny with a thirst for his mother's blood.  Will the season go out with a bloody bang?  I think it'll be great, as long as they don't kill off everybody like they did in Season 1.  After all, Briarcliff - and the anthology's - fates are at risk in the final episode of AHS.