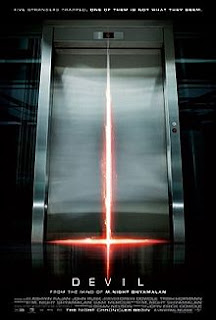 Plot overview:  While investigating a working man's mysterious suicide, recovering alcoholic Detective Bowden (Messina) gets called onto an occurring case in the same building.  Five strangers - temp security guard with a criminal record (Woodbine), old woman and apparent thief (O'Hara), young woman and serial divorcee (Novakovic), former Marine with a guilty conscience (Marshall-Green), and sleazy mattress salesman and crook (Arend) - are stuck between floors in an elevator, and one of them is not who, or what, they seem.  Egged on by the strong religious beliefs of security guard Ramirez (Jacob Vargas), will Bowden be able to save these sinners before it is too late?

I like this movie.  It isn't your most typical thriller due to the parallel but related plots, the numerous backstories, and of course the narration by Vargas.  I mean we've seen people trapped in a tight space with a killer or something supernatural in the past (House on Haunted Hill, Panic Room, and even the Saw series to an extent), but I think this movie, based on a story by M. Night Shyamalan, presents a neat new twist on the mysterious and terrifying situation of being stuck with a murderer.  This makes an especially stressful situation for the police and security who are forced to look on as what seems to be lots of bad luck prevents them from accessing the elevator.

This is a character driven film, relying on the psychological and physical torture the five intended victims must undergo during their time in the elevator.  One of my favorite things about this movie is how we are made to think that each one of the five could be the murderer, and then immediately after the blame switches the former suspect is exonerated.  This begins to play not only with Detective Bowden, but with the five other main characters, and then even us as the audience.  Wild ride!  While some of them, such as the mattress salesman, are easy to detest from their entrance, other characters seem perfectly innocent until we begin learning more about their pasts.  I think this is a nice commentary that regardless of our outward appearance, and regardless of how kind or innocent someone is today, who hasn't done something wrong in the past?  And who's to say that everyone will be forgiven?

Considering that a large chunk of this movie takes place between the various angles of the inside of an elevator, I thought the cinematography was good.  The first shot of the film, an upside down aerial view approaching Philly, was really cool.  Then from the scenes in the jumper's office, the basement, and especially the roof of the office building each contained their own excitement and especially suspense.  Like if fewer characters had come close to the edge of falling off a building my palms would have been a lot less sweaty.  Special effects were also great.

Let's talk about the horror.  This movie presents us with your standard And Then There Were None plot, exactly like House on Haunted Hill, except in a smaller confined space and with fewer little indians.  Oh yeah, and they're not all human.  That changes the game a bit.

I have to admit, every time the elevator went dark I felt pretty scared.  Especially when we got the sound effects that someone was dying but we didn't know who or how.  The deaths themselves were not the most creative they could have been, but hey, I guess they were working with what they had.  From these moments of blacked out terror - no, not that kind of blacked out terror, you St. Patty's fans - we really are given a treat of suspense and gorey surprise once the lights come back on.

Ultimately we are dealing with human psychology.  As the numbers begin to dwindle, we see a free for all, then a 2v1 situation, and finally the two final intended victims/ criminals left waiting for what's next to come.  I think that freaked me out, too, because I got to thinking, in a situation where I look like the murderer but I know that I am not, how do I convince the other innocent suspect(s) that we are all in the same boat?  Humans can be pretty scary when they want to be.

From the movie title and then from Ramirez's narration, we know that the devil is among or within the people trapped in the elevator.  That being said, I think it's poetic that they are caught, literally suspended in midair awaiting their deaths one by one.  The elevator becomes purgatory, and the devil becomes a dark angel collecting the sinners.  Clever, Shyamalan.  Otherwise, I think when we are finally shown who the murderer is it's a real treat.  As I mentioned before, each of the five principle characters seem equally innocent and then also guilty, which makes narrowing down one guilty person difficult.  This wasn't the first time I've seen the film, so I paid extra close attention to our diabolic friend this time around, and from what I found there wasn't any hint or clue that would make us suspect him or her any more than the others.  If I missed something, let me know!  I'm not going to ruin the surprise and tell you who the murderer is here.

Then we have the kind of epilogue in the final minutes of the movie, where I have to admit I was certainly expecting one thing to happen, but hey, I guess they wanted to teach some sort of message.

Final critique:  If this movie delivers anything, it's suspense.  The numerous scenes when the lights go out (a la Wait Until Dark) are pretty tense, while the rest of the movie itself is filled with building suspense, questions, and terror.  The whole film deals with religious themes of guilt, sin, and redemption, so don't be surprised to pick up on a lot of that.  Overall, it is an enjoyable movie and a good watch.  I mean, if you get scared really easily, you can always cover your ears for the scenes where the lights go out, but otherwise I found it to be an enjoyable amount of suspense, always keeping us on the edge of our seats.