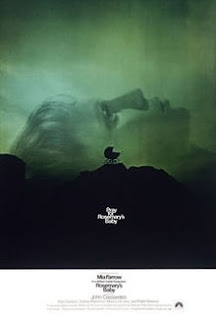 Plot overview: Rosemary (Farrow) and Guy (Cassavetes) Woodhouse are a happy young couple living in a luxurious, new apartment on Manhattan's Upper West Side. Guy is a driven, aspiring actor, and Rosemary is a kind but naïve homemaker and hopeful mother-to-be. Although warned by their dear friend Hutch (Maurice Evans) about the strange and dark history of their new building, The Bramford, the young couple are happy in their apartment and are openly embraced by their elderly, eccentric neighbors Minnie (Gordon) and Roman (Blackmer) Castevet. After Rosemary conceives, she goes through an increasingly painful pregnancy, but she has Minnie to help her with home remedies and even the care of one of New York's top obstetricians, Dr. Sapirstein (Ralph Bellamy). As her concern about her unborn child grows greater, Rosemary also begins to learn about the possibility that Roman's family and friends practice witchcraft. Unfortunately, Guy becomes more distant as his acting career takes off substantially. Ultimately alone and scared, Rosemary becomes more desperate to protect her unborn baby, although soon she will realize it might be herself that needs the protection.

This movie is great. Hands down, it is a slow and steady, suspenseful success. Following the eerie (irritating) opening music, we find ourselves in a very real 1960s Manhattan. Rosemary is perfectly chic throughout the whole movie, from her mod minidress, to the wallpaper she puts up in the nursery, to her iconic Vidal Sassoon haircut. While the plot isn't something I personally believe to be plausible, the world that it takes place within most certainly was copied from Polanski and author Ira Levin's real life.

Let's start by talking about Mia Farrow. I mean, come on. She makes Rosemary such an interesting protagonist, even though she spends most the movie confused, in pain, or scared. While there isn't exactly enough depth to make her very realistic (mainly just a mother's instinct to protect her child), there is something really interesting about her. I enjoyed following her on her scary and uncertain journey through pregnancy and potential insemination by satan. Mainly I liked her look: mod, frail, cute, and determined. She was a truly perfect choice for this role.

The other character that sticks out for me, as she did for awards committees at the time, is Minnie Castevet. Ruth Gordon is a ridiculous character from her first scene to her last. The best part is, there are absolutely women like this living in Manhattan that you encounter from time to time on the subway or sidewalk: those old, loud, noisy, tacky, 'devil may care' types— you know to stay out of their way. Ruth turns Minnie into an almost preposterous character who, while annoying, we can still find to be endearing. The mystery behind the many characters in this cast leaves us questioning who is good and who is bad until the end, when perhaps we question our own definitions of 'good' and 'evil.'

I guess the only thing I don't love in this movie is that it drags on at times. At 136 minutes, this certainly isn't the longest film we've ever seen, but the lack of action makes it more noticeable. Not that this movie would benefit from much more action than it already has, but I'm just saying. We can only watch Rosemary wander around pregnant and in pain for so long.

Otherwise I kind of enjoy that any logical audience member goes into the movie more or less knowing what's going to happen. Honestly, we are as in on the plot as the rest of the coven, with only Rosemary being left out. *Irony* Still, any film that can pull this predictable plot off while maintaining an audience—and finding new fans even 50 years later—is a home run.

Final critique:  If you are looking for a wild, fast-paced ride of scares and jumps, this is not the movie you want. If you are looking for a deeper, suspenseful, and subtly terrifying horror classic, then you've come to the right place. I would recommend Rosemary's Baby to any viewers, as it is a relatively calm and all around enjoyable movie with only a few scares or disturbing images. Really excellent film right here, perfect for a rainy afternoon or a quite night in.