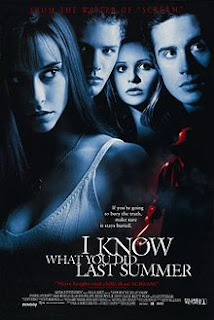 Plot overview:  Exactly one year after hitting a mysterious man on the road and dumping his body in the ocean to hide the evidence, now distanced friends Julie (Love Hewitt), Helen (Gellar), Ray (Prinze), and Barry (Phillippe) are reunited under uncomfortable circumstances in their hometown of South Port.  Having been tortured by her guilty conscience for a year, Julie is horrified to find a note left in her house saying "I KNOW WHAT YOU DID LAST SUMMER!"  As the group of estranged friends comes together again to get to the bottom of the mystery, a killing spree starts in the small town as a large figure in a fisherman's slicker suit carrying a lethal meat hook begins tracking down his four intended victims.  Who is the mystery killer and how does he know what happened last summer?  The four friends must fight for their lives to stop the murders and rest their guilty consciences.

I am probably the biggest fan of '90s-2000s teen horror movies.  There is something so wonderful about  the overdramatic plots, the awful scriptwriting, and the creative, often slightly provocative deaths.  I prefer this era of horror to teen slashers from the '80s (mainly due to effects, costumes, plots, and the fact that I was alive), and even today I don't find that horrors directed at young audiences or groups of friends deliver as much as they did in these days when they hit their prime.  It really brings back some good memories.

I Know What You Did Last Summer centers around a group of four (superstar) friends, so I mean with four of the hottest celebrities of the moment headlining, nothing could go wrong, right?  Wrong.  Again, I'm a big fan of this film (more for personal measures than practical ones), but Jennifer Love Hewitt bugs the heck out of me - I mean, how annoying is Julie? - which is never a plus when that's your main protagonist.  Still, she is the most empathetic one of the group, and automatically I think it's safe to assume that she will be our final girl.

Otherwise, I'm a huge fan of Sarah Michelle Gellar, Freddie Prinze, and Ryan Phillippe.  That's not to say their acting is great.... Let's talk about the script first.  It's pretty darn bad.  I found it awkward in many parts, mainly because we're dealing with a group of teenagers who are speaking like somebody put a script in front of them instead of allowing them to talk as they actually would.  On top of this unrealistic dialogue, the, er, acting doesn't really take the characters to high places.  Furthermore, this film relies pretty heavily on the assumption that the characters make some of the stupidest decisions possible given their situations.  Would I rather watch Summer Catch and Cruel Intentions?  I mean, maybe, but luckily for this little gem, the horror aspect brings me back every time.

We have a compelling mystery here, I'll give the film that.  There are great questions thrown at us (who knows?  who is the killer?) which leads us to question not only the host of supporting members of the cast (shout out to the creepy Anne Heche and the beautiful but horrendously rude Veronica Vaughn- I mean Bridget Wilson- but also our core four, as we think they are the only ones who truly know what happened that night.  I truly enjoy this type of mystery in horror films, that keep us guessing and guessing again until the puzzle pieces are put together just near the end, in a somewhat far-stretched but otherwise understandable way.

I think this film does a good job with the killer (Muse Watson).  The covered-head-to-toe look is creepy, and it prevents us from guessing who he might be - or even if "he's" male or female.  The best innovation here is the meat hook, hereafter made iconic to this film trilogy.  Some deaths are more exciting than others and we range from simple slashes with the hook to dramatically murdered characters carried away by this murderer's seemingly superhuman strength.  As far as this killer goes, he pulls off some pretty tricky stuff for a human which had me questioning the reality of his plotting more than once.

Better than the death scenes, perhaps, we have the suspenseful scenes which are a plenty.  Whether we are in a locker room, some sort of fish factory, the sticks of whatever state this is supposed to take place in (maybe one of the Carolinas?  Even though the cliffs are so obviously California), or especially a bedroom, this movie is filled with moments that make us want to curl up and cover our eyes before the dark figure swings out his hook yet again.

As far as cinematography goes, I didn't play very close attention to the actual filming of this movie, but it's one of those horror flicks that relies on typically dark, cluttered rooms, fog, nighttime, and various angles that show us the doors left open or the shadows crossing the hallway.  I wasn't crazy about the last 10 or so minutes of the movie, which I thought were pretty random, but otherwise I enjoyed the setting of South Port.

Final critique:  My biggest complaint with this film is the unrealistic dialogue and the anything-but-practical actions and reactions of this group of teens.  Still, I Know What You Did Last Summer is a sort of young classic: a horror film that might not have a lot of intrinsic merit, but that if you mention, most people will know the name.  My recommendation?  Watch it.  Have a sleepover, make some popcorn, have a pillow fight, and watch this movie to get all scared before bed.  The blood is minimal, the deaths are quick, the suspense is high, and our protagonists are just so charming.  If nothing else, you won't be wasting your time by watching this stupid, suspenseful film.