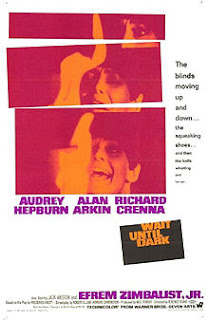 Plot overview:  Hoping to recover an old doll filled with pouches of heroin, conmen Mike (Crenna) and Carlino (Weston) are hired by bad guy Harry Roat (Arkin) to retrieve the item by whatever means necessary.  They have tracked down the doll to the apartment of photographer Sam Hendrix (Efram Zimbalist, Jr.) and his blind wife Susy (Hepburn).  Taking advantage of Susy's disability when she is home alone one night, the three men weave an intricate web of lies, fake stories, and false characters to gain Susy's trust and ultimately find the doll.  But will their treachery be enough to outsmart Susy in her own home?

I'm doing something a little different here, as I wouldn't consider this a "horror" movie, yet I am writing about it in my Horror Blog.  After two nights in a row watching slashers from the late '90s, I felt the need for a change and went further back to a much more well thought out, much better acted movie, that being Wait Until Dark.  I had heard tons about this great film, but I had never seen it.  As I watched it, I kept debating back and forth whether or not I would blog about it.  Well here we are.

I wish I had sat down at night in a dark room with a bowl of popcorn for this one.  Instead I started part of it, then watched the second part on my laptop in the afternoon while doing other things around the house.  That certainly distracted me a bit from the film, but I still really enjoyed it.

This is a smart movie.  It has that old feeling (and that older look), and aside from a few loud scenes on the street we can really allow ourselves to be comfortable even as the suspense of the plot grows stronger and the tension between characters seems unbearable.  I think it is a very bold move to have a main character be blind, which Hepburn acted superbly and affectionately, which shouldn't come as a surprise in the least.  I was impressed with her eyes as well, as she didn't wear glasses but maintained her gazed straight head at all times.

The three conmen might deserve more credit.  They are tough, mean, and intelligent, which usually isn't a factor for typical movie bandits.  Crenna isn't only a heartthrob, but when he shows actual feelings throughout (perhaps sympathy for Susy) he becomes a dynamic character.  I especially liked Arkin, although I was constantly confused by his strange, Godfather-esque accent and John Lennon glasses.  Together, they add a lot of drama to the film and give it almost a live theater feelings due to their strong acting and the small set of the apartment interior.

As far as my scare rating goes, this falls into the old category of movies that just can't scare us anymore since we're used to today's over the top terror.  I would only credit this movie with one scene that actually scared me, that being the first time Mike goes looking in the bedroom closet.  Didn't see that one coming.  The famous blackout scene was really excellent, making me wish I had been watching in the dark.  Unfortunately, it wasn't quite as scary as I was expecting it to be.

Final critique:  This is a great choice if you're looking for a pretty drama and action packed film on any night of the week.  The thrills are few but the suspense is high, and this movie doesn't lose sight of its integrity in order to deliver unnecessary scares.  Some parts are a little slow, and I think a remake would have a good chance of doing well, but in the meantime, see this original gem.