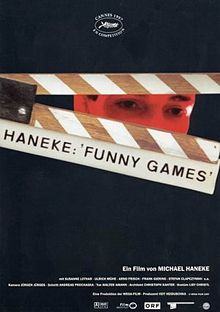 Plot overview:  Wealthy German family Georg (Mühe), Anna (Lothar), and son Georgie (Clapczynski) arrive at their lake house for a relaxing vacation.  While still unpacking, the odd Peter (Giering) shows up at the door asking to borrow eggs for the neighbors, which he clumsily breaks two separate times.  When his eloquent friend Paul (Frisch) shows up, the unpleasantness begins and they break Georg's leg with a golf club.  With the husband out of commission, the family submits for a night full of more terror than they could ever have imagined.

The entire time I watched this movie I was just thinking about how great a shot-for-shot, verbatim English remake would be.  After finishing, I was glad to hear that that already happened in 2007, so I will have to check that out some time soon.

This film was bizarre; it certainly kept me attentively watching throughout its entirety, but it was never really too scary.  In fact, I read that Haneke didn't intend for this to really be a 'horror' film, which it certainly isn't if you limit your definition of horror films to slashers and monsters.  The best way I could describe this to a more mainstream horror audience would be that it does everything right that The Strangers does wrong.  Basically, our two antagonists (but are they really antagonists?) show up at a nice house to torture an unsuspecting family simply because they can.  Perhaps this film makes the torture even sicker than the sheer violence of The Strangers because Peter and Paul's acts are carried out always in game form.  Some of the worst psychological torture came for me in moments such as when the men play a German version of eeny meeny miny moe (a la Elephant) in order to chose a victim, or when Anna is told to play along in order to chose her husband's fate.  Each member of the family at various times is falsely given the power to determine how another family member will be harmed, thus straining one's own conscience as well as the family relations.

Perhaps more than family, this is a movie about a woman.  Lothar shines as a believable wife and mother (perhaps the former more than the latter) from basic tasks such as cooking then later on as a protector and even as a tragic hero.  In fact, unlike women in most horror movies, Anna is never a victim of her womanhood (in the scene where she is made to strip, the environment - though certainly hostile - remains polite under the manners of the psychopaths, and her body is only complimented and neither touched nor violated aside from taking away her privacy).  While Georg's manhood is taken away after his leg is broken, and while Georgie's innocence is lost throughout the ordeal, Anna is our hero - strong and able to attempt escape - but she always remains a mother and wife although she suffers for it.  The filming and script make her the most important member of the family for us, and from the beginning of Peter and Paul's reign of terror we find ourselves rooting for Anna to triumph - a fact which Paul is aware of and calls us out for.

The most unique aspect of this film for me was Paul's character, his breaking of the fourth wall, and his god-like control over the events of the movie.  Although a negative force in the film (assuming we root for the wholesome family, their lives, and their values), Paul becomes the lead player drifting in and out of our reality as viewers and the fictional reality within the movie.  Paul and Peter's conversation at the end of the film is a commentary on the events of the film itself, and Paul - aware that he can break the fourth wall as he pleases - even makes the statement about fictional realities or dimensions being real and actual merely because they do exist, by definition, albeit within some realm of fiction.  Some of the most chilling moments of the movie for me were when Paul would turn around and look through the camera directly at us.  I thought it was funny when he would talk about how the movie was progressing, what we wanted and expected as viewers, and what would be good action and suspense within the events of the film.

One of the strangest things for me was after Anna successfully grabbed the gun and killed Peter.  That made sense to me; it was what we expected (maybe) because it's how most horror movies go, a sudden turn around so that our heroine can break free.  When Paul pulled that stunt with the remote I knew that it was hopeless and that the family was really doomed.  (Well actually, I already knew how this ended because I read about the final scenes before watching. Womp womp)

I thought Paul and Peter were so perfect, so psychotic, so creepy.  Their dialogue made their characters so excellent to me, and that's what I wanted most to be replicated in the English-language version of this film.  I most liked how well-spoken Paul was, and how he kept teasing Peter for his weight.  The scene when Paul keeps talking about Peter's background - with the story constantly changing - was really eerie.  Also, the fact that they kept wanting to eat and play games during their stay at the household further showed the 'ennui' they claimed to be suffering from, and as I've stated in previous entries, the worst kind of terror is a realistic terror that happens simply because it can.

We have to appreciate the commentary this film makes on violence - pure and pointless violence - which is always appropriate considering the amount of terrible shootings, killings, and fights we hear about in our world today.  The cruel and blasé happenings in this film, and the possibility of them happening in real life, push Funny Games into the horror genre in my book.

Final critique:  A lot of people would find this film disturbing, which I can only assume Haneke wanted to happen after watching.  It isn't a scary film, per se, rather what happens in the film and the lack of any motive thereof is what becomes scary for us,  the viewers, no longer safe in our reality that Paul is able to penetrate and even perhaps control as this film breaks away from most horror movie archetypes, going so far as to break two of my cardinal rules in an anticlimactic, unimportant way.  Funny Games, then, becomes not only a horror movie, but an interesting look into a terrible nightmare void of reason that will have us questioning what we would do in a situation where our rights as humans and love as a family are tested and stripped slowly away.