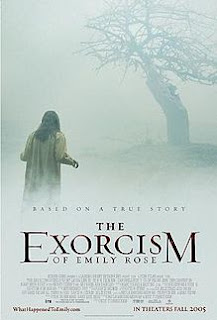 Plot overview:  Following the attempted exorcism performed on the now deceased 19-year-old Emily Rose (Carpenter) by Father Richard Moore (Wilkinson), the priest finds himself on trial for negligent homicide.  Assigned to his defense is the self-declared agnostic, career-driven Erin Bruner (Linney), who makes it her job to prove that a darker, spiritual realm exists, not only to the jury, but to herself as well.

I don't really like this movie, so I'm not going to write much about it.  It's one of those "based on a true story" jobs that has virtually nothing to offer us, and in my book (or blog) it shouldn't even be considered a horror movie.  I'm over exorcisms.  I don't really like exorcism movies because they're all the same, and this one proves no different as it brings nothing new to the genre except perhaps that it is actually more of an Inherit the Wind than The Exorcism (which looking at the poster it so desperately markets itself to be), with the 'scary' parts only retold in flashbacks.

I saw this for the first time in about 2006, and I didn't like it then especially because I was surrounded by people who thought it was terrifying.  Even recently I heard someone consider this movie scary.  Like, what?  The fact is this movie is not scary minus perhaps a few good moments as Emily begins experiencing demonic forces (or not) surrounding her at college.  Hence the F+ rather than an absolute failure.

It gets real old real fast that it is constantly raining in this movie, and that the movie itself is so dark (making it very difficult to watch in the daytime).  This film is filled to the brim with pathetic fallacy and exorcism cliches in general.

Luckily Linney is a great, fun actress who just keeps her cool throughout the film and her character's self journey.  Father Moore is a nice guy but pretty blah in general, the character of Emily bugs me in her creepy, wallpaper-patterned dresses and drab Kansas turn of the century, Puritanical look.  I don't like the way the the prosecutor Ethan Thomas (Campbell Scott) speaks, or the way he fails to act during most of the film.  I did, however, think the exorcism scene was fun to watch and interesting with its various references to the Bible and history.

Final critique:  This is a boring movie.  It isn't scary unless you get scared by the slightest things, which take place only during about 5 minutes of the movie.  I don't really recommend this film if you're looking for a horror movie, although the religious supernatural courtroom plot does become pretty compelling as the main plot of the film.  Boom, roasted.