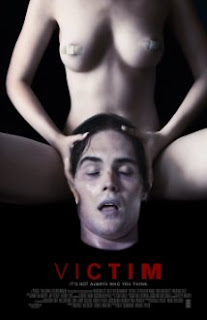 Plot overview:  A young man (Weigand) is kidnapped and forced to undergo extreme mental and physical torture in a surgeon's (Bob Bancroft) twisted plot for revenge.
I realize I have been gone for months, dropping out of the horror movie and blogging scene to enjoy a lazy summer.  Well boredom has kicked in, and my duty to The Horror Blog has found its way back into my schedule.
Unfortunately, this is the movie I chose to start with.  I was looking forward to a lazy Saturday night on Netflix's awful horror movie selection, and for some reason this seemed appealing.  The movie poster certainly helps, but what really pulled me in was the the short description for the film basically made me think I was in for a perhaps gorier, English-language version of Almodovar's La piel que habito which was so excellent I don't know why I haven't blogged about it.
This movie was nothing that non-spoiling internet reviews promised it to be: it was boring, not frightening whatsoever, there was no gore considering the movie is about forced surgery, there was very little plot evolution and everything was predictable.
Returning to Almodovar, I don't get how the two movies can exist separately, and I was upset to learn that Victim is the older of the two films.  The plots are exactly the same except Victim is boring and slow and cheap and poorly done with no artistic valor that I could find.  I mean, to be honest I did really like Georgie (Kelly), and while Dr. Volk really annoyed me I thought he was pretty perfectly creepy.  In fact, this movie is saved by the fact that the acting is not horrible; the actors are just not given much room to do their thing, per se.  But really, this movie has the same exact plot as La piel que habito - like the plots are 98% identical.  How is that legal?  Oh well.  Almodovar trumps.
Back to the bash, this movie was boring and frustratingly predictable - but to its credit, I didn't feel the urge to turn it off (hence a D- rating instead of a flat F).  The movie delivers in no way except for a kind of sadistic pleasure of revenge which kept me hoping something shocking would happen.  There was that one little plot twist regarding Rachel (Jennifer Howie), the daughter's, fate, so I guess that was interesting, but still this movie was a kind of one-time mistake in my book.
Final critique:  I'm back on the horror blogging scene and this is my flaccid debut.  This movie has a cool (though not unique) plot which had me setting out with big expectations.  The film didn't deliver, but I was able to sit through it hoping it would improve.  While it never was great, this is not the worst horror movie I have seen, so if you feel like sitting through La piel que habito's ugly little sibling, this is the film for you.