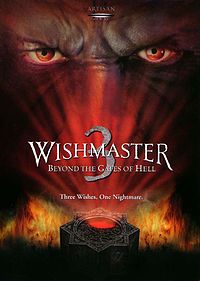 Plot overview:  The wishmaster (Novak) is back again, this time awoken by the wholehearted college student Diana Collins (Cook).  In his pursuit for Diana's wishes and therefore the freedom of his evil race, the djinn takes the form of Professor Barash (Connery) in order to track down his victims without drawing attention.  This time, however, the djinn must battle powerful forces of good, but who is the only one that can try and stop him?

I didn't hate this movie as much as the second one, but I suppose that by this point my expectations had already been lowered.  This time around we have a totally different djinn, be that plot or the poor change of makeup and lack of continuity.  In fact, we don't actually see the djinn in his true, bad-costumed self, but rather in the Professor's body the entire time (gee that must help with the budget), not that Connery was anything special (letting his dad down just like Diana in her childhood car accident...oops too soon for her traumatic childhood which causes her trust issues now?  Excuse me while I puke... but actually, Horror Buff has a stomach bug at the moment).

Here we have your typical college movie: the group of friends (50% guys, 50% girls), as usual two couples each with a unique personality.  Diana is our virgin of course, with the kindhearted but frustrated boyfriend, a girl best friend who is sexually active and a little crazy, and her sex-driven boyfriend.  We've never seen anything like that before...  Each classroom scene is filled with literary allusions that just so happen to relate to our plot, and during killing sprees the rest of the school is off partying.  Cliche cliche cliche.

I read a theory online that this is supposed to be a totally different djinn than the previous films, which I like an accept due to a lack of continuity regarding the fire opal and the djinn himself.  He acts totally different yet again, acting as more of the devil himself than merely one demon, and this time around he is able to hurt people even when they don't necessarily wish it.

This movie takes a weird turn when Diana wishes that the spirit of St. Michael - who takes the bodily form of Diana's dedicated boyfriend Greg (Mehler) - to come help stop the wishmaster.  That's new for me!  Of course not even the archangel is a cure-all, and Diana must take on the djinn pretty much by herself in a final rooftop battle *yawn*.

The best thing about this movie is A.J. Cook because Criminal Minds is my jam.  The gore is also pretty decent and I think there was a death scene I liked but honestly I can't remember anymore, so I guess it couldn't have been too great.  Come to think of it, one girl wishes to lose weight and as you might imagine, things get pretty gruesome.

Final critique:  This movie wasn't awful but there's no need to ever watch it unless you're just really into djinn or otherwise stuck in a movie marathon like I am.  The Wishmaster series continues to go downhill in this installment which depends heavily on sex-driven college kids and a bad, corny script to get us through eighty-nine minutes of cliches - well, except for the whole archangel bit.  Still it had a few scares and some gore, so at least it kept things entertaining.