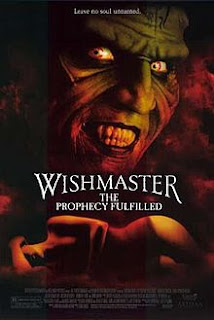 Plot overview:  In the final installment of the Wishmaster movies, the djinn (Novak) has returned yet again to unleash his race unto the human world.  Roused from the stone by Lisa (Spencer-Nairn), the djinn takes the human form of his first victim, Lisa's lawyer Steven (Trucco), in order to gain her trust.  This time, Lisa makes all three of her wishes, but when love comes into the picture, the djinn will have a harder time than he expected to fulfill the evil prophecy.

Now that this movie is over, only this blog post is keeping me from bed.  At this point I don't know why they bothered with a fourth straight-to-video movie, but I did read it was filmed only a week after the previous film.  Two bad birds with one stone I guess.

I didn't dislike this movie actually.  It's nothing special, but unlike the third film I found the plot much more compelling.  Based on the title alone I figured that the 'awaker' would make her three wishes this time, and I was hoping we would see some other djinn (which we did!  a little monster peanut gallery tucked away in the flame, but hey).  The cool part was the third wish itself.  I really liked the whole love bit which then put the power of the fulfillment of the third wish in the hands (or heart) of Lisa herself because of her free will.  The plot thickens!

The djinn costume didn't seem as bad in this movie, but he certainly seemed softer as a character.  Certainly he didn't try as ruthlessly to collect three wishes from the person who woke him up, and he didn't lose his patience until the very end.  Deaths were less creative and gore wasn't as plentiful as in other films.

Final critique:  Now that I'm done with the series I hope it doesn't affect my fondness for the first installment.  This wasn't an awful film but it was cheesy and the general audience certainly wouldn't like it.  Like the last film, I wouldn't really recommend this unless you are simply trying to complete the Wishmaster movie marathon.

The first one was good so I got hopeful.  Just goes to show you, be careful what you wish for.