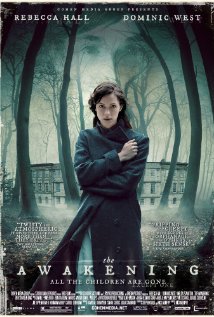 Plot overview:  In this classic English ghost tale, Florence Cathcart (Hall) is a paranormal investigator who has dedicated her professional life to disproving hoaxes and supernatural cons following the terrible loss of WWI.  After being called to a Rookford boarding school to investigate the death of one student and the possible haunting of another, Florence's logic will be tested as her emotions and memories are challenged by the living and the dead.

I thought this film was so great, but as you know by now I am a sucker for ghost stories.  This is a lovely period piece, basically your classic English ghost tale (which I am a huge fan of), so in my book it was a recipe for success from the beginning.  I have to admit I wasn't blown away by the film, and a few times it had me worried that it was taking some odd or bad turn, but it certainly kept me on the edge of my seat (er, bed) right up until the open (and confusing?) ending.

The setting, indoor and outdoor shots, and cinematography are all beautiful.  The Manderston House was a beautiful backdrop to this ghost story, and the aftermath of WWI was a somber setting - I liked at the beginning when it was called "a time for ghosts."  The entire film had a sort of pale, green lighting, like being underwater or just in the grey English countryside, so wouldn't you know that worked perfectly with the plot.  The interior shots were really great; the furniture and details really beautiful, the tools used by Florence intriguing and spooky, and all the chase scenes through dark, twisting hallways and tunnels made the film more suspenseful.

The characters were really great, too, like characters in a story you might read instead of just a movie you're watching.  I was surprised to see the talented Miss Staunton in the role of Maud, the school matron/ housekeeper I was suspicious about from the beginning.  It drove me wild the entire film as I couldn't place where I knew the young and really talented Hempstead Wright as Tom - after the film I was reminded that he is, of course, Bran Stark in Game of Thrones.  I'm sure we'll see more of him.  I like Rebecca Hall a lot, and I thought she made for a nice character, although her acting job wasn't the greatest thing I've ever seen.  She was, however, certainly appropriate.

The best thing about this film aside from the setting was that the plot kept twisting and turning, even if it was with extra/ unnecessary plot just to throw us off.  Ever since I was little I couldn't really enjoy a horror movie because from the first scene I was already solving who was the killer and how and why, which horror movies almost aways make easily apparent for anybody used to your typical plot.  (One problem with the horror movie industry, I suppose, is that we've seen all this stuff before so what is new and what really grabs our attention?  Today, unfortunately, movie makers - and audiences - have turned to that gore-porn to keep them satisfied.  I'm much happier with a good plot.)   Well as hard as I tried, I overlooked a lot of hints that this movie was - or was not - throwing at us.  To be honest I wasn't paying tons of attention to the film what with dinner and my family about, so I think that if I had watched it in the dark and alone without distractions it would have ranked a higher scare score.

Of course as with any ghost movie we're expecting some sort of plot twist.  I was hoping this wasn't going to pull a The Others (these two movies are like siblings - PS I was supposed to blog about The Others a few months back... sorry), but I really wasn't sure who was going to be dead or alive or sane or crazy or what.  We knew Florence's opinions and logic were going to be tested - we've seen the whole non-believer deal before - but I wasn't ultimately expecting what was revealed to have happened.  It really made for a cool twist ending and a cool plot in general.  This movie played with the blurred lines between the living and the dead, and who is capable of what, and I truly enjoyed that.

Again I admit the ending had me confused, which I'm sure was on purpose as a few things are left open, and I know my opinion although I'm not even 100% I believe in it!  Understandably I'm being confusing, so you'll have to watch the movie for yourself to decide.

Final critique:  I highly, highly recommend this film.  It is enjoyable, and there is so much more to it than jumps and screams, therefore making it a horror film that more general audiences could appreciate.  This is a great gateway film for those viewers who find most horror movies too scary as there is some great suspense but only a few truly scary moments; otherwise there is a lovely English ghost story making up the rest of the plot.  A real gem that I'm glad to have stumbled upon!