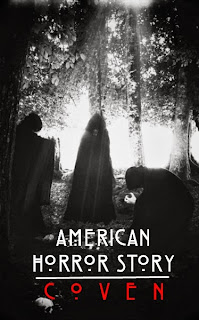 (Still not sure about what poster I want to use...)

Plot overview:  In the premiere of the anthology's third season, we are introduced to Zoe Benson (Farmiga), a normal teenage girl whose life changes when her boyfriend inexplicably dies while they have sex for the first time.  Her mother then reveals to her that she is a witch and that this gene or "affliction" runs in their family.  She is promptly taken away by a quirky escort (Conroy) to the all-girls, New Orleans finishing school Miss Robichaux's Academy for Exceptional Young Ladies - a safe haven and training ground for young witches - where she is introduced to her fellow students: the vengeful and self-centered but lonely movie starlet Madison Montgomery (Roberts), sassy human voodoo doll Queenie (Sidibe), and the kind, clairvoyant Nan (Bower).  The headmistress is the cautious Cordelia Foxx (Paulson), whose attempt to safely develop (or suppress) the girls' powers is challenged by her newly arrived mother Fiona (Lange), the reigning Supreme of all witches, who tells the girls that if they don't fight, they burn.  While the students struggle with their powers, their relationships, and their identities, Cordelia and Fiona will have to deal with their contrasting views of witchcraft as well as their own familial estrangement, which comes second to Fiona's own obsession with trying to regain youth and vitality, an ordeal that will surely take her to the dark sides of witchcraft and New Orleans Voodoo.

I was blown away by the premiere of AHS: Coven, no more effortlessly drawn back into the dark glamour and creative terror of the anthology than the effort it took me to Google "watch american horror story coven online free".  There is so much to talk about, I'm going to have to try to focus myself here.  First and foremost, we can't ignore that Season 1 took place inside the home, Season 2 a church-run asylum, and now Season 3 a school.  Institutions.  America.  Horror.

What should of course captivate the viewer is the strong acting that is already evident.  While American Horror Story is known for wild, winding plots and of course it's famed smorgasbord of horrible, gory images, with snapshots of sex and death, murder and blood, relationships and dismemberment thrown at us like paint in a Jackson Pollock piece, I have to say that the great acting serves somewhat as an anchor, a harbor of sorts that maintains pace throughout the show's twisting and turning plots while simultaneously taking us into darker places of the human spirit.  I am thrilled to have Taissa Farmiga back this season, and while she expertly plays the marginalized, angsty teenager I see her as someone totally different than Violet from Season 1, who I easily got sick of.  Zoe on the other hand is somebody I want to see more of and learn more about, like a kind, sane soul in this wacky world of witchcraft.  The one thing I didn't like was her blunt, anticlimactic "So I'm a witch" bit in her otherwise well-written opening explanation sequence on the train.

Surrounding her is a cast of extremely diverse, talented women.  I was really pleased with the intricate characters of Madison, Queenie, and Nan, who I also hope to see more of, but by reading various pages about the show I see that not all of them are considered to be main characters this season, so we'll have to see how that plays out.  Also, I'm going to call it now, but I really wouldn't be surprised to see one of these young ladies die throughout the course of the season - okay, okay, I get that with this show (which has been known to kill off the entire cast) that calling this prediction isn't a big deal, but we'll just wait and see.

The dynamic between Delia and Fiona adds a different layer to this show.  I think the most obvious motif we've seen so far this season is femininity and feminine identity: the relationship between mothers and daughters, girls and their boyfriends, girls and their girl friends, and the identity of witches within modern as well as (briefly) 17th and 19th century American society.

But really- where are all the guys at?  I know that we're to expect several love interests, and I highly doubt that Evan Peters in the role of good-hearted frat boy on a scholarship is actually dead.  Let's talk about this really quickly: my first question is what the heck is up with his accent?  He and Lange went all out on the Massachusetts/ Boston accent last season and this time around I'm just not even sure what he's throwing at us.  It is certainly similar in some aspects to last season's accent, but then there is I guess a Louisiana drawl added in?  Or not?  I have never been to New Orleans, so I don't know how they talk, but his accent was just wild.  I know he mentions his mom lives/d in the 9th Ward, so I guess we're made to expect he's a local boy.  Anyway, I love that he and Taissa have been reunited.  That's a beautiful thing about this anthology, how characters come back and relationships and loves can be reincarnated across time and space.  While watching the scene where Violet and Tate - I mean Zoe and Kyle - see each other through the ice luge/ sculpture - it reminded me of Luhrmann's Romeo + Juliet and there was just so much romance.  For a girl who will never know 'true' love, we'll have to see where Zoe goes with this one!  My next question is what's up with Spalding (O'Hare), the creepy butler straight out of Scary Movie 2?  There's definitely more to that story.  I'm not convinced that this is the last we'll see of Lily Rabe either.

Lange is very interesting this season.  While I wasn't 100% convinced by her plentiful pop culture references (the words "Facebook," "Twitter," and "Hogwarts" sounded so odd coming out of her mouth - but the last once cracked me up), she was a blast to watch in her various moods: desperate to attain a youth serum, drugged up and dancing, or glamorous queen-of-the-damned leading the young witches on their field trip.  If she's either good or bad this season, it's too soon to tell.  I love that we see these kind, young witches under close watch and protection, but then the devil-may-care attitude of Lange makes us question: what happens when the Supreme isn't focused on the well-being but rather the survival of her kind (with much more selfish motives)?  I'm also forced to question the role of her withdrawn daughter Delia, a woman who seems friendly for now but could be capable of much more.  Anywho, Lange's outfits and scene entrances were expertly done.  Her Mary Todd Lincoln joke had me laughing out loud.  Where will this mother-daughter duo take us?  Only time will tell.

We've known for a while now that the big star of the season was Oscar-winning Kathy Bates, brought to us as an anachronistic Madame LaLaurie who has somehow achieved eternal (or very long) life.  I thought she had the best delivery in the entire episode; she was crazed, unfeeling, and cruel - and yet somehow entirely different from horror hall of fame character Annie in Stephen King's Misery.  We become witnesses to her based-on-real-life horrors (which AHS has taken some liberty with), and considering that her finals years are unaccounted for, it's a fun twist to pretend that she's been around all this time.  I'm extremely excited to see how evil she remains in the present day, as well as her relationship with Fiona.  Same goes for the storyline we'll see involving the passionate, conniving, and sensual Angela Bassett as New Orleans favorite Marie Laveau.  It's little touches like these real-life characters that make American Horror Story American.

The first episode of the season has already provided us with the show's signature touch of a mix between real and fanciful horror: the true accounts of Madame LaLaurie's mutilation of her slaves, human objectification and revenge, Voodoo, self-discovery and fear of who we are/ might become in society, alienation from parents and families, gang rape and drug/ drinking culture in fraternities and universities, fear of being different, mob psychology, and of course witchcraft.  Before I saw the episode I kept reading how grossed out people were after 'the first five minutes,' so needless to say I was pretty uh disappointed?  This episode wasn't scary.  I mean it's tough for an ongoing, broadcasted show to really be scary, but I guess at least it's making horror more mainstream.  Considering that this was a record-breaker in terms of number of viewers for American Horror Story (congrats!), we can at least rest assured that more and more people are getting into the horror genre.

Lastly but not least, I am in love with the musical theme of this show, the simple "la la lala lala" that follows us throughout.  It's so easy, so good. By the end of last season, I was already sick of the pulsating, static sounds of the opening sequence.

Final critique:  Where will this season take us?  We have so far a compelling story about a multitude of female relationships, and I expect to see more strong female characters as the season adds on old favorites like Frances Conroy and Alex Breckenridge as well as new stars like Patti LuPone and Christine Ebersole (should we expect more musical numbers this season?)  I can only expect human resurrection, religious persecution, love, hate, and self discovery in the newest edition of this anthology that is easily winning the horror-loving hearts of Americans and viewers worldwide.