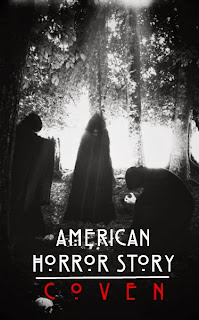 Plot overview:  Following the [various] tragedies at last episode's frat party, the even more isolated and angry Madison (Roberts) tries to do a dark favor for the grieving, confused Zoe (Farmiga).  Meanwhile, we learn more about headmistress Coredlia's (Paulson) personal life with her husband Hank (Josh Hamilton).  After digging up the immortal yet cursed Madame LaLaurie (Bates), the ruthless Supreme witch Fiona (Lange) searches New Orleans and tracks down Marie Laveau (Bassett) from the rival clan of voodoo practitioners.

This episode dives much further into the dark side of witchcraft without losing an emotional side.  No one ever said being a witch was easy, but the wicked gals of AHS: Coven bring plenty of heart to the story as well.  We saw more relationships form, develop, or end in this episode, and while the episode is titled "Boy Parts" and we are introduced to Delia's husband, the emphasis is still on the females here. Even Fiona shows some emotion towards the end of the episode when sitting on a bench with the bewildered and out-of-place LaLaurie.  Is there perhaps more to our favorite wicked witch?

Let's chat quickly about plot before I movie into spoilers and analysis/ opinions.  "Mommy, where do witches come from?"  That's a question we've all asked at one point or another, right?  Well if we watched Episode 1, chances are we asked ourselves that question last week.  One of my favorite things about horror is the different ways that each film, TV show, or story interprets an evil or specific genre that we think we've already seen done.  Like sure, we've seen a million Draculas, but sometimes he's just a random Eastern European dude with a blood fetish, and sometimes he's Judas, condemned to walk the earth harvesting blood for all time.  A good interpretation makes all the difference.  That's why Horror Buff was excited to get some juicy plot thrown our way this time around in Episode Dos, and it all comes down to one of America's most terrible and true stories: slavery.  If you never fell asleep during a production of The Crucible and you listened closely to the dialogue between Fiona and Laveau, you'd know by now that according to AHS' interpretation, witches first learned their power from Tituba, a slave in Salem and one of the first women to be accused of practicing witchcraft.  Not only was li'l Tituba accused, but she confessed to said witchcraft (after being severely beaten by her master... because a confession after torture is always honest) and then went on to accuse many others, constantly elaborating her story and generally scaring everybody in Salem so much that lots of innocent people were brutally executed in various, terrible ways.  Tituba is of debated descent, but AHS has chosen the belief that she descends from the Arawaks of the "West Indies" (speaking of which, Happy Belated Columbus Day if you're into that), aka the Antilles and the Bahamas, aka one of the tribes most famously annihilated by the Spanish and other gold-hungry Europeans.  Wait for the best part: after causing so much chaos in New England, Tituba was sent to jail, released, and then --- wait for it!! --- she disappeared.  I have to admit that I didn't know this until doing some research just now, but hey, it works great for the plot here!

One more time: as dedicated viewers of AHS, we are to understand that Tituba, a native of the Carribean and alleged practitioner of old, dark magic.  Upon being brought to Salem as a slave, Tituba taught her magic to the white settlers, and witches as we know them in America (and the world? we're not sure) were born.  (Why Delia's scrolls/ spells are in Latin, then, is beyond me...)  Other important plot note: early in the episode we learn that Queenie (Gabourey Sidibe) is supposed to be a scion of Tituba.  We'll see if that comes into play later!  All in all, this "passing on" of magical knowledge has since caused a rift between native practitioners, such as those who know observe voodoo including Marie Laveau, and the witches, largely considered to be white (at least according to Queenie).  Riveting stuff.

As if anyone thought that Evan Peters would be crossed off the list of characters after just one episode; he's AHS royalty, people.  The only thing is I'm just not sure how Kyle-y he's going to be this time around as a modern, fratty Frankenstein's monster.  His revival scene was the first real bit of magic that we've seen so far this season, and it wasn't Hocus Pocus (actually that movie is surprisingly dark for kids...)  What I'm trying to say is that this was no white bread magic, this was dark, satanic stuff with blood and salts and candles (matches have been a really beautiful motif so far this season).  It ticked me off that Madison left the morgue as soon as she thought the revival didn't work- what was her plan of action after workers came back to find body parts sewn together in what was clearly some sort of ritual?    Kyle himself was angry, violent, and confused, like any monster recently brought to life, and I'm sure we're in for some complicated little love story here.  I did love how his resurgence caused some sort of ripple that Misty Day (Rabe) was able to sense.

Speaking of which- did those silly humans really think a witch with powers over life and death could be killed so easily?  Silly farmers and their pitchforks (and chewin' tobbacy).  I can't tell yet if I like Misty or if I trust her.  She seems, like her gift itself, unstable and potentially dangerous.  She's clearly lonely and out-of-it, and I was surprised that Zoe didn't try and convince her to come join da crew at Miss Robichaux's- she is a young and gifted witch after all.  Her instability is what worries me most, so we'll see where this season takes her although I assume she'll be more on the positive side considering the events of last season.  Even so, we've certainly seen her dark side in the first few minutes of the episode (if she were with PETA imagine what she could do with fur coats).

I am really thrilled to see where the Fiona-Laveau-LaLaurie plot line goes this season.  It's difficult because we naturally feel pity for LaLaurie, cursed with immortality and suddenly thrusted into modern society where even the ring of a cell phone frightens her.  Then we remember who she is and what she did, and we have to remind ourselves that she shouldn't be invited to our pity parties.  Still, this anthology has been known to push our limits and make us question ourselves.  There is this overwhelming sense of lost love - Laveau's bull beau, LaLaurie's daughters (even the ugly one!), and something about Fiona's past we're still not sure about (is there a man?), my guess is there's still more to see between her and Delia.  Taking these three women, all of which are evil but likable in their own way, we have three types of relationships lost entirely: a woman and her lover (Laveau), a women and her children (LaLaurie), and a woman and herself (the self-absorbed Fiona).  All of these women think themselves great through their powers, accomplishments, and followers, and now each will have to prove just what she's capable of.

At the end of the day, what American Horror Story really comes down to is the beautiful images that it gives us.  This show is a well thought out work of art, and each week it gives us new, terrible, beautiful, frightful, artistic imagery to work with (or deal with) and try and understand (or erase from our memories).  The opening credits this season are so excellent (I didn't really like them in Asylum), filled with spooky and mysterious pictures of women, ceremonies by firelight, blood, hoods, snakes, horns, candles- the list goes on.  Just do a Google image search and you are provided with truly beautiful yet scary pictures and posters, many of which possess a moving symmetry with much deeper meanings (from Connie Brighton and Rubberman to a nun with a contorted patient).  On this episode we saw the 'boy parts' that represented tragedy to Zoe and potential to Madison, and to many viewers it probably just represented a reason to go blow chunks (this show is full of them).  As each new episode comes about, I mainly look forward to plot development and then what new, tragic or inspiring imagery will be introduced to us.  In a show like this, it's easy to be distracted by the disgusting and disturbing elements and then to overlook the artful, beautiful side of horror.

Final critique:  Good episode, good plot development, great acting- but where's the horror?  Methinks it's approaching us subtly and that soon it will take us by storm.  If we see more magic/ ritual scenes, I can only imagine how dark (and hot?) they will be.  Heads are starting to butt, a minotaur is being let loose, and soon we'll have not only a serial killer but a superstar joining our ranks: next week, Miss R's receives some new, religious neighbors (holla' Patti LuPone).  The girls will meet some new love interests and learn how to deal with old (deceased) ones.  Family troubles and old rivalries will not be easily extinguished.  There is so much in store for this season, but Horror Buff says bring on the scares!