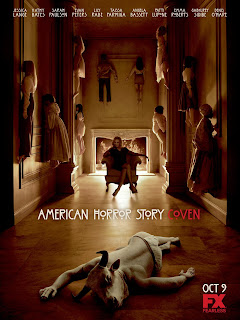 (I thought the change of poster was appropriate for this week)
Plot overview:  We learn how Fiona (Lange) gained her title as Supreme after the death of her mentor Anna-Lee Leighton (Ebersole).  Fiona continues in her struggle to remain young and powerful despite suspicions that Madison (Roberts) may be blooming as the next Supreme.  Madame LaLaurie (Bates) continues to accustom herself to the modern world and is punished for her racist antics, building an even rockier relationship with Queenie (Sidibe) who wants only to be loved.  Zoe (Farmiga) reunites regenerated Kyle (Peters) with his hopeless mother (Winningham) unaware of their family secrets.  The rift between witches and voodoo practitioners is firmly established after Delia (Paulson) asks for a guaranteed fertility ritual from Marie Laveau (Bassett), who spurns her on account of her wicked mother.
This episode broke all the rules.  While I generally thought it was a great episode, I couldn't help my mouth from falling open time and time again after I had to ask myself "Did that really just happen?"  I'm surprised that this episode had the same rating (MA LSV) as previous episodes considering the content.
Before we get into that (half of me doesn't want to), let's talk about what's going on at this point three episodes deep in the season.  I'm worried about Misty (Rabe), who certainly felt a connection with Kyle as she nursed him back to zombie-like health.  It was obvious that she is only reaching out to Zoe, who is uncharacteristically cold towards the Stevie Nicks-blasting bayou girl, and now that Zoe has given her the brush not one but two times, I'm worried she won't stay aloof and friendly for long.  Why not just invite her to Miss Robichaux's?  (Especially now that they're in need of more pupils LOLZ).  I don't get that.  We'll have to keep an eye out for this life-and-death-defying witch.
Another new plot development is the arrival of the uber religious Ramsey's - maniacal mother Joan (LuPone) and strapping son Luke (Dreymon) - in the house next door to Miss Robichaux's.  While Luke seems harmless, his mother seems to already be onto the case of the young witches.  Having this God-faring family right next door is sure to cause some conflict for the school, although they seem to be busy enough with internal struggle that an external lawsuit doesn't seem like much.
Our other big nemesis - Voodoo Queen Marie Laveau - seemed even more wrathful this episode, contrasting her beautiful, sexual side and turning it to what seems like pure anger and dark power.  Will the clash between witches and followers of voodoo become the major conflict of the season?  Will Queenie somehow bridge the gap since we know she descends from Tituba?  Maybe we're more worried about Queenie's immediate fate regarding...
*SPOILER ALERT*
... WHAT was that girl thinking?  This was not the first jaw-dropping gross moment of the episode, but it certainly left its impression.  American Horror Story's message to the public after this episode remains clear: we don't care about rules and norms.  After all, it was pretty clear that our sassy, young, and misguided witch was ready to engage in some bewitched bestiality.  Yup, the other 'B' word.  And that wasn't the only "Oh no they didn't" part of the episode - let's take a quick minute to brush over the incest we were also subjected to.  What won't this show do?  Was it in poor taste?  Was it done for a purpose or only to show some humane terror that we'd rather not acknowledge?  That remains for viewers and critics to decide; I'm sure that people will be vocal about things like this.  I didn't even know we could show these things on TV.  Aside from these more taboo subjects, we are also being force fed a lot of racism via LaLaurie this season, with her comments going so far as to insult the current President.  On some levels this is just a bridge to place this show within our reality, on the other hand it was a surprising insult.  Though I suppose it was no harm, no foul when we were told that Fiona voted for Obama "twice."  A funny touch that the coven's leader swings left.
A guilty pleasure moment for me during the episode was when franken-Kyle bludgeons his mom to death.  The sounds, the blood spatter, and then the image we get when Zoe discovers her body was just perfectly gorey.  Viewers beware!
Aside from specifics instances that push the button, I was most surprised by this episode's seemingly rapid killing off of characters.  Then again, in a world of witchcraft we never know who's gone for good.  Still, Fiona - who walks such a fine line between pure, unfeeling evil and tragic emotion and defeat - has shown us more of her true colors: red and black.  I love the color motif this anthology always plays upon, and in this episode it was really beautifully played out by Fiona in red and Madison in white.  Like I said in last week's entry, this show pays a lot of attention to art form, imagery, and style.  I think this episode's crowning moment was the imagined fertility ritual, filled with dancing, African-Carribean music, and images of fire, animals, and blood.
Final critique:  Deaths and conflict are increasing rather rapidly as we enter the third season's third episode.  I like that we hear Fiona's inner dialogue and see it contrasted with her outer actions.  The scares still aren't there, at least not in the ways we expect them to be, but there is something very dark about this season.  What trouble lies in store with Marie Laveau and her minotaur, or with Joan Ramsey and her Bible?  So far it's clear that nobody is getting what they want, be it love (romantic, familial, maternal), power, acceptance, youth, or freedom.  If the powerful and magically inclined aren't even powerful enough to get what they want and be happy, what does that say about the rest of us?