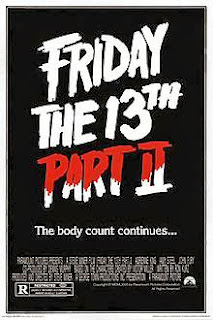 Plot overview:  Five years after the events of the first movie, the woods and waters surrounding Camp Crystal Lake are still said to be haunted by the vengeful spirit of Jason (Gillette).  When a group of teenagers arrive to a Counselor Training center just down the lake from "Camp Blood," will they provoke the wrath of the formidable killer?

While this movie does boast a pleasant change of plot (like thank goodness this wasn't just a new batch of teenagers deciding to go back to the original campground) and cast, it is pretty much your typical horror sequel.  By no means am I trying to say that this was a bad movie, but it was a very easy watch, almost pleasant, with few scares and not that much terror.

Surprisingly, acting wasn't that bad in this movie.  I know what you're thinking, it's a teen horror movie from the '80s, acting has to be horrible, but at no point did I find myself sitting there getting ticked off by bad delivery.  Sure there are some dumb moments, and I think about half the movie relies on flashbacks and plot development before any terror really begins, but I thought the film progressed smoothly.  One thing that does constantly surprise me about these movies is the way the death scenes are filmed and edited - there is about 0 gore in this film.  Zed.  Zilch.  Sure there's some blood, sure we see the murder weapons and occasionally the weapons and bloods combined, but at no point are we subjected to guts or long-lasting deaths.  In fact, most death scenes cut to still frames or that weird 3D effect.  Personally I'd like some more for added terror!

From the beginning we have this sort of cheesy '80s flick filled with your classic "cool" and even "nerdy" characters, tons of short shorts, that odd blend of humor and horror, a heavy dose of teen lust, and just the right amount of '80's fashion.  The large cast of teen characters was actually pretty surprising at the start of the movie when you start asking yourself "are all of these people really going to get killed off?"  We have a pretty wide array of personalities here - from the seemingly uptight but actually chill but general pushover Paul (Furey) to his sweetheart last-to-arrive (foreshadowing) Ginny (Steel) to the sexy but big-hearted Terry (Kirsten Baker) - because why not go skinny dipping when out looking for your lost puppy - as far as even having the handsomely handicapped Mark (Tom McBride).  The most interesting thing here is that none of these characters was mean, or annoying, or even an obvious victim.  We have a generally nice group of people, and aside from some recreational drug use and premarital relations (read the rules, people), these victims were really very innocent.  This calls our attention because Jason especially (along with frenemy Mike Myers) is known for his prophetic slaying of badly behaving teens.  This movie presents us with a group of young people whose only crime is stepping foot on the J-man's turf.  Tough luck, kiddos.

Likewise, a surprising feature of this movie is that our final girl isn't even too virginal herself, although she is the girl that plays devil's advocate when she allows herself to tap into how Jason himself might be a victim.  Speaking of which, I've read some interesting criticism about how these movies are morally wrong because they allow the viewer to sympathize with the insane killer.  If Jason's (among other antagonists) primary motive for discontinuing random teens is that they are breaking other moral and legal codes or that they themselves are the enemies (i.e. premarital sex, drug usage, or grouped into the same type of people that murdered his mother), then perhaps his actions are in the right.  Jehoshaphat forbid the audience side with a killer, right?  A fun twist this movie provides us (we'll see something similar in Halloween V) is when Ginny's survival comes down to her relating directly to the killer through his own mind and memories, even if it does involve putting on a rotting, bloody sweater.  So brave.

This movie isn't very scary, but the scary moments I thought were particularly noteworthy.  The two scares I remember (because they made me jump) came towards the end of the film as I was getting ready for bed and let my guard down.  Those were really good.  Otherwise, this film relies on constant, constant tricks to make us expect we're about to be scared, when in reality nothing happens.  Much like in the first movie, the first person point of view cameraman makes things a lot more exciting in otherwise dull parts.  Is it the killer?  Is it just the camera?  Wait for the next scary shot and you'll find out.

Let's take one final moment to talk about the worst part of this movie.  I think that it wins "worst last 10 minutes of a horror movie", because really it wasn't a bad film and then all of the sudden, the last ten minutes happen.  What?  Why?  Just when we think not only a final girl but her guy survive, we hear a tapping on the door.... to reveal a dumb dog we thought dead - I'm pretty darn sure we saw her/ it dead early on - only to reveal the killer yet again.  And then what happened?  We're not sure because it's not explained to us, but it's immensely frustrating.  Who actually lived?  Who actually died?  And when and where and how in between.

Final critique:  While the first one is probably better, this wasn't a terrible sequel.  There is a fun cast of characters, and although we imagine the Friday the 13th series as headlining the horror stereotypes, I found this movie to be quite unpredictable at times.  I'm pretty pumped for the next installment in this classic franchise, but unfortunately I'm traveling this weekend so I really won't be able to blog until next week.  In any case, have a Happy Halloween, horror fans!