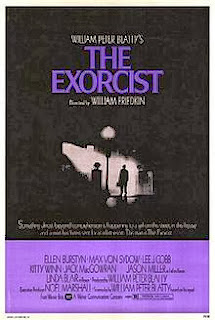 Plot overview: Recently-separated movie actress Chris MacNeil (Burstyn) is living in Georgetown with her friendly, spontaneous 12-year-old daughter Regan (Blair) and some staff. When Regan suddenly begins undergoing extremely drastic personality changes, Chris takes her to several doctors, who can only conclude that Regan should go to a psychiatrist. Chris, however, thinks that there is something much more fantastic and malevolent at hand. When Regan, who is now constrained to her bed due to her violent fits, appears physically altered and her personality has completely changed, Chris enlists the help of Father Damian Karras (Miller), a gifted psychiatrist and priest who is dealing with his faith. After seeking the help of the renown Father Merrin (von Sydow), both men attempt an exorcism to rid Regan of the demon possessing her.

If you ask anybody between the ages of 30 and 60 to name a horror movie, any horror movie, chances are they will name The Exorcist. There is something special about this film that scared—or maybe the word here is fazed—audiences and then stuck with them, something that people today still recount and it sends shivers down their spine. Horror Buff doesn't particularly love hopping on the bandwagon without giving the fad in question a good thinking over, so I have to admit that I was not enamored of The Exorcist after first seeing it when I was little. A coworker was talking to me about it recently while we discussed my love of horror movies, so I decided to revisit this classic. I guess I had to know exactly what it was about this movie that still scares people today.

Even if you're not into overkill, mainstream stuff, The Exorcist is a genre-defining classic. The movie is more artful than scary, relying on a few images that shock you and stick in your mind after the movie has ended. I have to admit, as I started this movie around 1 AM the weather took a turn for the worse outside my window, and I was able to enjoy this film during a pretty crazy wind and rainstorm. As I've said before, the ambience changes the movie-viewing experience entirely. Beyond the few scares this movie tosses our way, there is a general sense of uneasiness, and throughout the rest of the time we have a family struggle of which the drama certainly had me hooked early on.

What's weird about this movie? Nothing scary happens until about an hour into the film. Sure, there are a few subtle moments (I was really into the random flashes of that demon's face; would love to see a monster like that in modern horror), but the plot doesn't even beginning rolling into pretty far into the film. I thought the Ouija board was a fun touch, although I wasn't convinced that it was even important to the plot— is that how Regan first got possessed, or is it introduced as a cultural tool that introduces the possibility that Regan brought this on herself? Same goes for the small medallion that Father Merrin uncovers at the dig in Iraq. The multiple story lines in this movie struck me as being pretty bizarre in the fashion that they were ultimately edited together. It took such a long time to get to Regan's story, which, while everyone knows is the main point of the movie, in reality doesn't even take up too much time. We see practically just as much slow-moving background on Father Merrin (even though we don't know who the heck he is) and Father Karras as we do on the MacNeils.

One thing I did like about all the background was that it makes the characters more real, which I guess has a lot to do with the book on which this movie is based. I haven't read it, but I'm sure that Blatty, Friedkin, and crew knew exactly what they were doing. The dynamics between Burstyn and Blair are so genuine, so spontaneously realistic that you can't help but liking them. Blair is an incredible actress (although later in the movie it's not clear when it's actually her and when it's a doll with Mercedes McCambridge's voice) because you can't even tell she's acting. She just seems like a happy-go-lucky 12-year-old girl. This is one of the biggest challenges to Karras's faith: Why would such an innocent girl become a victim? What does that mean for the rest of humanity? The onset of her possession happens really quickly (hmmm), but the contrast afterwards is great. Out of all the possession movies I've begrudgingly seen, I think that my absolutely favorite possessed person has to be Regan/ Pazuzu.

What else is weird about this film that I wasn't crazy about? Now I certainly don't think that directors need to beat a dead horse, and I really can't stand dialogue for the sake of plot exposition, but you can't always take crazy leaps and expect people to follow. I acknowledge that I haven't read the book, so perhaps the movie was made with the understanding that many viewers wouldn't have as hard a time following along. Example 1: Father Merrin is called to check out the recently discovered dig site, and when he finds a small medallion and a carving he suddenly grows ill, freaks out, and 'has to leave.' And then he disappears for like an hour and a half. Alright. Later, Regan is showing her mom the Ouija board that she 'found in a closet' and we are introduced to this character of Captain Howdy. The Ouija board is a reference to one of America's most famous cases of possession, which Blatty's novel draws inspiration from. While we do see the planchette move by itself, therefore refusing to let Chris play along with Regan, we never see or hear it mentioned again, and even during a preliminary meeting between Father Karras and possessed Regan, when asked "Are you Regan's friend Captain Howdy?" the entity responds no. So is the Ouija board a red herring, or is Pazuzu just a master of deception, lying all over the place? I couldn't help but feel like this movie on several accounts jumps ahead and we miss out. Why are there bumps in the attic? What was there? A physical manifestation of the demon? Something else that ticked me off was the help in the house— did this movie ever explain that Sharon Spencer (Kitty Winn) was an assistant, or why she was living with the family? For half the movie I thought this was Regan's sister that Chris oddly didn't treat like a daughter. This was really confusing, but I guess it's in the book.

I think the special effects of the movie were really pretty good. In fact, I'd have to say that in the whole movie—forget the pea soup, the green slime, the mucus-y loogies-from-hell, the twisted necks, and even the crucifix being used as a weapon and other things—the scene that grossed me out the most was when Regan had to go to the hospital for tests and they like stuck that wire into her neck. The shooting blood and then even thicker needle really grossed me out. Perhaps the other memorable part about this particular classic is Pazuzu's use of profanity. Like keep your children away from this movie unless you want them acting like the offspring of a sailor and a truck driver. I think the fact that they filmed Regan's bedroom scenes in a refrigerated set was brilliant, because I hate in movies when it's supposed to be cold and you don't see any breath. I read that Friedkin kinda sorta abused his cast here, leading to some real and true reactions from various actors resulting from surprise or even pain sustained while filming. I also saw the version with the so-called "spider-walk," and I thought that while its placement within the film was awkward, the scene itself was a cool touch.

As far as acting goes this movie had a '70s touch to it, but the acting was both convincing and endearing. Call me crazy, but did anyone else find it ironic that while Burstyn plays an actress, I didn't think her acting in the beginning of the movie was that great? Regardless, she might have been my favorite character, but I found some scenes a little questionable earlier on in the film. I thought Jason Miller was the true main character of the movie (not sure how it is in the book), and while I felt like I was watching The Godfather, he did a good job. Not sure why Father Merrin is treated so importantly in the plot when his importance did not seem established to me, but I liked von Sydow's acting. As you know, I don't think Linda Blair could have done any better. A quick shout out to Reverend William O'Malley in the role of Father Dyer, because we share the same alma mater. You gotta love a good Jesuit-themed horror movie.

Final critique: You should see this movie, especially at this time of year. While I think there's much more to this movie than its horror, the scary scenes are fun and worth the wait. What I don't understand is why people, magazines, and conglomerate sites rate this movie the scariest movie of all time because it's quite simply not. Understandably, at the time of its release it might have been, especially because of the shocking language and gross imagery. What's strange about the 'scary moments' of this movie is that they're very memorable, but not very scary. Sure, you have a few head turns and a lot of slime thrown on people's faces, and the title song is certainly eerie, but these things last a brief amount of time and then the emphasis returns from horror to drama, which seems to me to have been the theme of this movie.