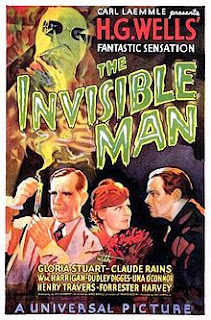 Plot overview:  While trying to perfect a chemical concoction causing invisibility, Dr. Jack Griffin (Rains) goes beyond the bounds of scientific ethics and winds up an invisible madman.  As the drugs begin to affect him more and more, Griffin wrecks terror around the English countryside and ultimately coerces his coworker Dr. Kemp (William Harrigan) to assist him in a plot to become the most powerful man in the world.  Before it's too late, Jack's love interest, Flora Cranley (Stuart) and her father, Jack's employer, Dr. Cranley (Henry Travers) will try and bring him back to sanity and save him from his own plot.

This is of course a timeless horror and sci-fi classic with dozens of spin offs and references in popular culture, boosting the Invisible Man to the ranks of Dracula, Frankenstein's monster, the Wolf Man, and the rest of the crew.  I think the interesting this about this fast-moving film is the strange mix of humor, madness, and thrills.  While the innkeepers Mr. (Forrester Harvey) and Mrs. Hall (Una O'Connor) partially drove me insane, especially the latter with her uncanny, shrill voice, they also made the movie a lot lighter, considering the plot.  While all of the title characters of Universal Horrors are indeed monsters, audiences have found likable or forgivable traits in many of them (the Phantom and Frankenstein's monster are just lonely, right?)  On the other hand, here we have Dr. Jack Griffin, who as the mean, rude, and crazed Invisible Man is perhaps one of the most annoying main characters in horror.  The effects of the monocane are pretty obvious here considering what a lunatic this guy's become; too bad Cranley never mentions the drug's other side effects include being a huge bully.  The guy is just so dislikable, we can't help but cheer on the ending - or, uh, hope for a happier one.

The other striking thing to me about this movie is all the big names.  You gotta love a Hollywood classic like this simply because of the familiar faces: the Invisible Man?  Oh, you mean that nice but corrupt guy in Casablanca.  The beautiful, forgiving although naive Flora?  No, no, you mean the elderly Rose Dawson Calvert.  Wasn't she a dish?  And who could forget her dad?  Not a single Christmas is complete for Horror Buff without watching Dr. Cranley portray that lovable angel in It's A Wonderful Life.

As far as supporting characters, both the innkeeper man and his wife can be seen in other horror classics such as Dr. Jekyll and Mr. Hyde and The Wolf Man (both from 1941) as well as the Frankenstein franchise of the 1930s.  If you pay close enough attention to the extras you'll see a future Academy Award winner, the real-life father of Bill from Kill Bill, as well as other familiar faces from other horror classics of the time.

This movie is a really quick watch, and while you'll find yourself simply hating the Invisible Man himself early in the film (learn some manners), it's a classic that will fit right into your afternoon horror movie marathon.  There is a lot of comedy in this film, from the scenes at the inn to all the bumbling police in their attempt to catch a man they cannot see.  I also did enjoy a lot of the special effects of things being thrown around and knocked over by the invisible doctor.

Final critique:  I don't love this film, but it's a harmless classic that I would easily recommend to viewers.  You could honestly squeeze this into an hour with a bowl of popcorn and someone cute cuddled up next to you on the sofa.  If you're looking for scares, The Invisible Man is certainly not the movie you're looking for, but it is a cultural and cinematic icon (with a really great poster!) that's sure to make you smile.