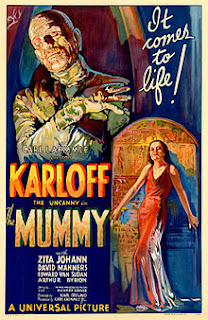 Plot overview:  During a tomb excavation in 1921 Egypt, Sir Joseph Whemple (Arthur Byron) and assistant Ralph (Bramwell Fletcher) find the mummy of the priest Imhotep (Karloff) who was mummified alive for his insolence.  After reading aloud the ancient Scroll of Thoth, Ralph accidentally resurrects the wrathful Imhotep who then walks out of his tomb, driving Ralph insane.  The mystery of the missing mummy continues for ten years, when a suspicious Egyptian man named Ardath Bey arrives at the home of Sir Joseph, instructing his son Frank (Manners) where he can find the tomb of the princess Ankh-es-en-amun - who, unbeknownst to Frank was Imhotep's great love.  When this new mummy and her treasures are donated to the Cairo Museum, Ardath Bey sets out to resurrect the princess, who he thinks is living reincarnated as the socialite Helen Grosvenor (Johann).  Will Frank, who is also infatuated with the beautiful Helen, be able to save her from the ancient mummy and his murderous plot?

This is a staple in the horror genre, a classic of classics right up there in the ranks of Dracula, The Wolf Man, and the Frankenstein franchise of the 1930s which also stars Karloff as the monster (aka Horror Buff's prof pic).  Of course most of this has to do with the casting of Karloff, who was a mere year out of his best known role as the aforementioned monster, which means here we're catching him in the early stages of his rise to becoming the king of horror.  Lest we forget the shout out for Edward Van Sloan in the role of Dr. Muller - the doctor who won't be fooled by Ardath Bey's scheming.  As you'll read anywhere, he is a well-known contemporary of Karloff, familiar in his various (but similar) roles as a doctor in Dracula, Frankenstein, and The Mummy.  Typecast, much?

The downside of being a staple of classic horror - even if you are from a beautiful and glamorous time in Hollywood that Horror Buff wishes he had been around for - means that you're probably not scary by today's standards.  Like not one bit.  Such is the curse of classic horror.  Just think, in 80 years, the Saw franchise and Human Centipede 2 (which I will not be blogging about because it frustrated me too much to try and watch) will be considered weak and puritanical!

But just because this movie isn't scary doesn't mean that it's not worth watching.  In fact, the best thing about these classics is that they are quick and easy watches such that you could knock out three in an afternoon for a classic horror movie marathon and still go out at night to rage/ trick or treat/ whatever you're into.  There is nothing better on a lazy fall afternoon/night than watching horror movies.  Trust me.  Having a cool social life is a close 2nd.  Fall activities like pumpkins and apples and fall flavored foods and walking around Central Park are also up there on the list.  Sorry, I'm back in Europe and have none of these things, which makes my Halloween season just a little less fun.

Let's start at the beginning.  The poster for this movie is really beautiful.  I would love to have that framed in my room at some point.  Also, this movie is just plain iconic - like who hasn't seen this image of Karloff as the Mummy, even if they didn't know who he was or what movie this was from?  I can't stress enough how movies like this represent a beautiful, golden age when cinema  and horror movies were filled with romance, shocking audiences for the very first time.  The score of the movie was filled with some nice pieces, though I admit being really surprised to find that the opening number was Tchaikovsky (my favorite piece of his, actually, from the finale of Swan Lake).  Later on, however, we're treated to mystical, sweeping pieces of what Hollywood has made us associate with Egypt and the Middle East - there are very few things I like more in movie scores than romantic music such as this.  Throughout the film, the soundtrack is used as a tool to provide suspense when otherwise nothing is happening on screen.

Acting is alright.  Karloff is a little stiff - ho ho ho - but I think he was just taking his role very seriously.  Which is good of him.  I liked Johann a lot, I thought she had this really exotic beauty going for her, and while she was reminiscent of many other Hollywood actresses at the time, I liked her in this role.  The movie's biggest fault is perhaps all the deleted scenes - there are absolute holes in the plot that might be easy to overlook while watching, but as the movie ends we're aware that something or some things were just missing from the fluidity of the film.  These would have showed us a lot more of Johann's skill, and it also would have developed more crucial chemistry between Karloff and Johann's characters that I really thought was absent from the film.

The set was impressive and romantic, and it really took us away to 1920s/30s as well as ancient Egypt. I think honestly that in this time period, film makers were perhaps not as focused on the horror as they were on simply taking the audience away to another place and time, as well as providing a few thrills along the way.  Something that they definitely do in a good, wholesome, old-fashioned way.

Final critique:  This is a standard horror classic.  The thrills aren't comparable by today's standards - they rely more on sudden shots of piercing, angry eyes, or slow shots of the mummy's burial cloth being dragged off screen.  Still, there is a pretty albeit underdeveloped plot that keeps us pretty entertained throughout the course of this short movie.  Perfectly recommendable for a horror movie marathon, for viewers who can't put up with big scares, or for a lazy October afternoon.  Enjoy.