Okay, so we're approaching mid-October - acclaimed Month of Horror - and here I am without a single entry.  I've just recently moved abroad again, hence the long period of delay, but that's all soon to change.  After all, it's October.  Soon you'll be sick of me - just kidding, that could never happen. 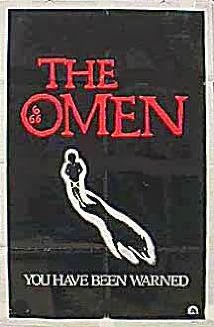 Plot overview:  After Robert Thorn (Peck), the American Ambassador to Rome, learns that his child died at birth, a quirky priest (Martin Benson) urges him to unofficially adopt another newborn whose mother has just died.  Thorn does this without ever telling his wife, Katherine (Remick).  Beginning with the child Damien's (Stephens) 5th birthday party, terrible events begin plaguing the family including the suicide of his nanny, the appearance of a terribly threatening black dog, and overall inexplicable behavioral problems.  Katherine begins to feeling more uneasy around her 'son' as well as the new, intense nanny Mrs. Baylock (Whitelaw).  After a crazed priest (Patrick Troughton) and a well-researched photographer (Warner) begin contacting the Ambassador with religiously-based theories about Damien, a far greater evil than anyone could have expected begins to take its toll upon the world.

This is simply an excellent example of a classic, scary horror movie.  Throw some big names, a good plot, nightmare-inducing music, two or three scenes that make your blood rate go through the roof, and a general sense of pessimism together, and you are guaranteed a spooky sensation.  In fact, if someone were to casually ask me to recommend some good horror movies to them, I bet you that the original The Omen would be one of the first movies I mention.  Known for it's haunting, award-winning score by Jerry Goldsmith (Poltergeist, The Haunting [which I've seen like three times in the past year and still haven't blogged about], and Magic [which is such a good movie and deserves a blog post soon]) as well as that pesky little Damien who's just so easy to hate, The Omen has been scaring young and old horror fans alike for almost 40 years.

The opening credits are scary.  The Latin chants/ yelling that you don't understand yet you somehow know is about the devil are perfect.  Within the first minute, the tone is set for the entire movie.  Seemingly innocent priests and babies turn into men and boy-creatures gone horribly astray in terrible plots to destroy mankind.  A seemingly cute little kid with baby fat suddenly gains all your hatred and breaks the fourth wall like he's some kind of boss.  Like who do you think you are?  The son of satan?  Oh, wait...

The acting in this moving is pretty good, as in I wasn't distracting by the acting, but it wasn't convincing either.  Here we have Greg Peck - a god among actors and men - but is he really that great here?  Are we too hung up on Atticus to realize that the Ambassador is a completely static character this entire movie?  Robert Thorn: impassive, stern, critical, tough-skinned.  Like sure he loves Katherine, but he is never excited, never happy, and never even really sad.  The only time he gets somewhat expressive is on a street in Israel when he supposedly has this moment of clarity and human compassion, shortly before a somewhat unfounded change of heart.  Like really G-Peck?  What's going on here?

Still I love the guy, so I wasn't too critical.  What I really had a problem with, however, was the family dynamic here.  We various 'families' here, not only within the Thorn family of husband and wife vs. 'son,' but I guess a little healthy rivalry between the Big Man and JC vs. the devil and his widdle baby.  Unfortunately, the Robert/Katherine-Damien dynamic is the least believable "family" I've ever seen.  And I'm not just talking about after Katherine begins to have bad dreams and feelings about Damien and then naturally distrusts him - I mean never once does either parent treat this kid like a normal parent would treat a 5-year-old.  They are so cold!  Does the kid even get kissed once?  His nannies are so much more devoted to him (as they both prove) - quick side note: the birthday party scene is just so good.  Like that nanny calling out to Damien before her big act.  Love it.  - back to the dysfunctional family.  At no point does G-Peck convince me that he is the father of this child - okay, okay, so he's not, but don't you think you'd learn to like the kid?  He never actually does anything bad except throw a temper tantrum before mass and like whoops he accidentally rides his trike (ugh, guess it beat The Shining to it) into mommy.  Like sorry my bad, didn't you learn never to stand atop unstable tables?  But seriously- if you watch this movie and you focus on the family dynamics, you will be disappointed.  Call me crazy, but I consider that bad acting.

Switching to a positive point for this film: I think that David Warner's death is one of the best scenes in horror.  Like from early on we know he's going to die, most likely from decapitation.  I personally was expecting it to happen in the cemetery/ dog scene, but then we get this gem of a slow-mo in Israel.  Nothing can beat that.  But really, considering it was only 1976 and there were effects I didn't criticize- well that's just genial.  Lol I just used an adjective that sounds better in Spanish than in English.

Final Critque:  This is an excellent movie that I would recommend to any audience.  There is a terrifying score, acting, and plot- even if it ultimately centers around politics.  What could be more appropriate for our nations 200th anniversary than a horror movie where the spawn of satan is born into the sea of politics and the eventually the family of the President?  Viva la horror.