Ladies and gentlemen, I bring you the first three-for-one entry of the Horror Blog. 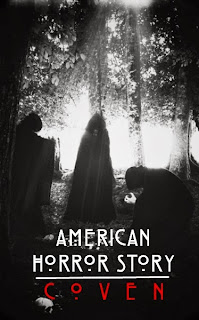 Plot overview: Madison's (Roberts) disappearance causing a strong sense of discomfort in the witching community, culminating in Nan's (Brewer) summoning of the Council of Witchcraft, headed by the always-suspicious-of-Fiona (Lange) Myrtle Snow (Conroy), to investigate the suspected murder.  The investigation, however, does not go in the pious Myrtle's favor.  Queenie (Sidibe) recovers from her minotaur attack under the care of her schoolmates as well as the socialite-turned-servant Madame LaLaurie (Bates), even as they are plagued by an army of Marie Laveau's (Bassett) zombies on none other than Halloween night.  We learn more about the secret life of Hank Foxx (Hamilton) as well as his true motives as Cordelia's (Paulson) husband.  Meanwhile, Cordelia is attacked during a night out with her mother, and is left blind but with the gift of sight through which she can read the minds of those she makes physical contact with.  Zoe's (Farmiga) powers continue growing as she tries balancing the whims of the regenerated Kyle (Peters) and the marginalized Misty Day (Rabe).  Finally, the young witches [un]intentionally set free the spirit of New Orleans serial killer the Axeman (Huston).

Well fiddle dee dee if I'm not three weeks behind.  Luckily Horror Buff has been jotting down notes while watch the past three episodes of this increasingly interesting yet decreasingly scary season of American Horror Story.  My general thoughts are as follows:

--So.many.questions.  Each episode has thrown more mysteries at us while only resolving some of our questions.  My biggest question at the moment is who was that hooded figure that tossed the acid into the lightweight (I thought maybe pregnant for a second there) Delia's face?  Stature-wise, they were mad short, so unless Murphy and Falchuk are about to introduce dwarves in the AHS scene, a far out suspect might be that warlock from the Council of Witchcraft (yes there are warlocks.. apparently).  Or even Nan!

--Speaking of which, is this witch becoming a bad actress?  Horror Buff is fearing for both Jamie Brewer and Gabourey Sidibe as far as acting goes; Nan sometimes speaks without any emotion (or at least not the correct emotion as she focuses too strongly on good diction); Precious relies on the grumpy sass that she seems to have become famous for… and I'm getting kind of bored of Quennie's negativity.  Can these young actresses step up their game?

--Myrtle Snow is an awesome, kooky, colorful, complex character.  Her scriptwriters are obviously having fun; after all they made her a "Guardian of Language" or something of the sort.  While Fiona is easy to love beyond her evil selfishness - minus that stunt she pulled with the stillborn *magnanimous* - I was a little upset to see Myrtle spurned again and again during the Council's investigation as well as years ago as a student and classmate of young Fiona.  But I guess we'll be seeing more of her...

--Now unlike the rest of the brainwashed world, Horror Buff is not a huge fan of zombies.  Obviously I love Night of the Living Dead and it holds a special place in my horror heart - but otherwise the undead bandwagon is not for me.  As all the zombies started appearing on Halloween ("great costumes" lolz) I got a little worried as to where we were headed regardless of Voodoo's close connection to these beings.  Aside from good makeup and interesting costumes, the return of LaLaurie's daughters, and good guy Luke's (Dreymon) major injury (although he's back at home so I guess he's okay…?) it was a pretty random plot twist, wasn't it?  What it did reveal to us was 2 major things: (a) Zoe is familiar with The Evil Dead and tried reenacting it and (b) our girl Zoe is getting strong!  Developing new powers all the time!  And really useful ones like making dead things die (again) and picking books off bookshelves.  Imagine how easy life would be…

--There's nothing to fear but fear itself, and also regenerated, crispy Myrtle (renewed enemy/ monster?), dangerously marginalized and unstable Misty Day (mind you she's now clad in red *pathetic wardrobe fallacy* and Stevie has been taken from her by that clumsy FrankenKyle), an enraged and Bastian-less Marie Laveau, a serial killer who we're not really sure is dead or not, a witch hunter, and of course Fiona even as she seems to be physically weaker than before.  Personally I think our biggest threats are Squirtle and Misty I mean Myrtle and Misty.

--A giant WHAT THE HORROR regarding Spalding (O'Hare) and Hank.  In just one episode, our perception of both of these 'men' changed entirely in Episode 4, and their back stories have been developing ever since.  The whole involvement of 'muggles' with witches is confusing in the first place - mainly in that these ladies and women have tons of powers but can't see through two schmucks who enjoy murdering or covering up murders, respectively, in their free time.  Really?  My guess is Hank will knock out another student or two before this season is done.

--The new Delia is great.  Earlier in the season I was worried that she might turn into some antagonist, but so far in her physical blindness and otherwise complete clarity has made her a much more mature person.  The makeup is a really cool touch.  Her wardrobe has also seen a change to darker colors.

Final critique: What else is there to say except boil, boil, toil and trouble - the plot is seriously thickening on this season of American Horror Story.  Our characters are each changing (developing, regressing, dying, coming back to life) in their own ways, which aside from the witch hunters and grumpy Voodoo queens is what's truly driving this season forward.  At the rate this show plays with life and death, what can we possibly predict?  Is a witch hunter - or even a good old burning at the stake - useless when Misty Day is around?  How much more important is magical power than common sense and a good heart?  Lots of questions to be answered and problems to be solved in the coming episodes.