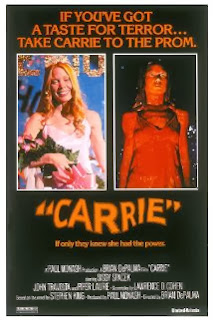 Plot overview:  Carrie (Spacek) is a social outcast in the senior class at Bates High School.  When asked to the prom by one of the most popular boys in the grade, Carrie thinks her dreams to fit in might finally be coming true, but her mother (Laurie), an abusive religious fanatic, warns her that she will be the laughing stock of the dance.  When some of the other senior girls pull a prank on Carrie at the prom, she unleashes a wrath that, until now, she had kept hidden inside.

Carrie is easily one of my favorite horror movies.  Ask me to find something wrong with it and I wouldn't know what to tell you.  Ask me to criticize it, and aside from some questions about the (im)balance between the unique exposition and the somewhat abrupt "horror" in the film, there isn't much to pick apart.  Overall, we have a great movie with a fun soundtrack, involved character development, terrific acting, and a sensational plot that will lure in any audience member.

Let's start with music.  This movie is a blast not only because of its pop music (a jazzy mix of rock and roll, soul/pop/Motown, and disco) but also because of the lovely score.  Especially Carrie's theme is a rather beautiful flute tune that mixes beauty and tragedy into some innocent drama that provokes us to question who is good and who is evil here.

Character-wise, we have a large ensemble of big names and even bigger personalities.  First and foremost we have Sissy Spacek (who we'd see down the line in An American Haunting…woof) - a naturally beautiful (but also slightly spectral), pale, freckly girl hidden behind uncombed, waist-length hair and frumpy, modest clothes.  While she plays the cliche victim-turned-offender, Spacek plays the part with a subtle strength, modestly commanding the audience's devout attention, respect, sympathy, and fear all in a very fast 98 minutes.  Piper Laurie made her return to film here as Margaret "Momma" White, and what a comeback it was as Carrie's mother is as iconic a character in pop culture as Carrie is herself.  The God fearing, God faring, overbearing, abusive, and dangerously unstable Mrs. White enthralls and thrills us, keeping us even more on the edge of our seats each time she appears in a scene. We watch this woman's fanatic and repentant beliefs spiral out of control during the film, surprising us with new twists and turns in her mania and adding actual fright to the movie.  Even though I'd seen this movie a handful of times growing up, I was surprised later on to realize that it is, in fact, John Travolta in the role of the boozy, douchey Billy Nolan.  Not surprisingly, Billy Nolan - while more delinquent - is almost identical in character to Danny Zuko, who would be born unto the silver screen two years later.  Speaking of identical characters, my girl P.J. Soles is on the scene wearing funny red hats, obnoxiously chewing gum, and all around having one great senior year (until, you know, prom) in the role of Norma… aka the precursor to Lynda from 1978's Halloween.  They are basically the same person, except Norma has weird bangs and Lynda always says "totally" while chewing like a cow… teenagers!  Lastly, I think Miss Collins (Buckley) is such a great character.  First of all she acts like a boss while slapping around b*tchy students like the thinks-she's-hot-stuff Chris (Allen), and then she shows off her big old heart by truly investing herself in Carrie's social isolation and ostracizing.  Unfortunately, she goes and blows it (and also totally breaks character…) when she laughs during prom.

Ah, prom, a pinnacle of teenage American culture.  While we may not realize it stateside anymore, prom is truly an iconic, coming of age dance that outside cultures see in movies and TV shows and wonder about in not-so-silent awe.  Having lived abroad for a few years, I can account that young and old people alike are always curious about this "end of course dance."  I mean, I'm not from Texas, and my East Coast high school bureaucracy didn't allow for hierarchical popularity contests such as homecoming/ prom king/queen - Horror Buff is all for tradition, but my high school administration didn't want people's feelings to get hurt… that's another story for another time, and another blog - so I don't know if prom is still the highlight of a teenage girl (or boy)'s life in some rural states.  For us it was more about the following weekend in Seaside Heights (#yolo), but hey, prom is prom and at this point why not celebrate four years you think are the most important of your life until you go to college 3 months later only to realize it all meant nothing?  This movie, most likely set somewhere in the Midwest, maybe Cali (although the actors feature a range of southern/ yokel accents with some Jersey accents), captures the feeling of an American high school during our nation's bicentennial (just imagine that while Carrie was getting her revenge at prom, Dazed and Confused was taking place a few states away).  That being said, I love that movies like Carrie and Prom Night play with this cultural icon and turn it into something terrible - blasphemous, even.

This movie is filled with beautiful religious motifs that only enhance the experience of Carrie's transformation.  The first scene of the movie - which is frankly kind of shocking as we don't see that kind of nudity in modern racy films - is a foggy, dreamlike, modern teenage portrayal almost of a Birth of Venus; a high school locker room filled with beautiful, naked sirens, lost amidst their laughter, the steam from the showers, and their own blissful ignorance.  Then we have Carrie, pure and sweet under her shower until her unexpected puberty hits her and frightens her out of her wits.

Carrie's growth as a teenager with telekinesis culminates at the prom when she is taken for a victim for the last time.  Her revenge is almost poetic as she turns prom "among the stars" (Heaven) into a fiery inferno (hell).  This is the most exciting scene of the movie by far, and while it isn't particularly 'scary' compared to what we're used to, it is certainly thrilling and even frightening, especially all the cut scenes of Carrie's eyes matched with striking strings or some other shrill sound as she causes each disaster.

-Quick question: what is the fate of blondie Tommy (William Katt)?  After being knocked unconscious by the bucket (which everyone including faculty laughs at which I don't understand because come on that's pretty serious), his body is taken off the stage but then I don't think we see it again as all the kiddies run from bleachers to doors to walls trying to avoid their imminent deaths.

-Also on the topic of the prank itself: who in the world does that?  Who goes through such crazy lengths to ruin a girl's life just because a teacher gave you detention on behalf of said student?  It's gross enough that Danny and Sandy I mean Chris kill a pig to collect all that blood, but then they try and run her over in Greased Lightning?  Like okay psychopaths.

Back to religious motifs.  Carrie returns home all sulky and bloody after her *disastrous* prom only to take a bath aka baptism and possible forgiveness for her sins.  A word of advice from Horror Buff though, Carrie, you're covered in pig blood.  That merits a shower and certainly not a bath.  Oh well she just gets bloody again shortly afterwards.

Then we have Momma again, who we come to find is experiencing the tragedy of men, herself the victim of all the things she warns Carrie about: temptation, lust, pride, and boys.  I think it's interesting that we learn that Carrie is a product of a little cheeky premarital sex (which is simply against the rules), which automatically makes her, as mother says best, born of sin herself.  Perhaps Mrs. White is right when she says "the devil has come home!"

-My other favorite line here spoken by none other than Momma is "Take that dress off - we'll burn it together and pray for forgiveness!"  Can you think of a better mother-daughter bonding activity?

All of this speculating leads us to one final question: is Carrie evil or is she merely a victim of her own circumstance?  And do we the audience sympathize too much with Carrie?  I know that I for one was rooting for Carrie this entire movie because she is a sweet and innocent girl who is tortured by her classmates simply because she is different (and because her mom is literally the worst person ever).  Not only is Carrie unfairly picked on, but people like Sue (Irving) and Tommy recognize the good in her and treat her like a normal person, and that gives us in the audience more hope for her case.  Then, to top it all off, Carrie has telekinesis which is pretty much the coolest (yet hardest to spell) power ever.  Like how cool is this girl?

Or, conversely, is she evil incarnate?  I would go with the former except for when, you know, the house unexpectedly collapses.  What is that about?  We know they are living in foreclosure of some sort because of a For Sale sign we see in the first scene of the White house (lol).  I could have sworn that in my previous experience with this film I saw some sort of foreshadowing (creaky walls or floors or something), but this time around it really took me by surprise.  Is this some Deus ex machina, proving to us that Carrie was, in fact, evil?  That her mother was somehow right?  This seems like the likely answer, especially considering that in death, Mrs. White looks rather like a martyr, eerily similar in that pose as the Jesus/ St. Sebastian figurine in Carrie's closet.  We'll never look a a round butter knife the same way again.

Basically, if movies like Halloween and Friday the 13th are criticized because they allowed audiences to sympathize with the murderer, I would say in your unhappy bickering, don't forget to add Carrie to the top of the list.

-Final thoughts, imagine if you were Sue Snell and (a) your name was actually Sue Snell and (b) your entire graduating class died at prom.  Just imagine those two things together.

-Fun fact: this was the first screen adaptation of a Stephen King work.

Final critique:  This is an excellently crafted, spooky, and haunting horror movie of the highest caliber.  I would highly recommend this movie for all audiences except for people that don't like blood (I went to high school with a girl who fainted at any sight of blood and one of my closest friends really likes pigs so she probably wouldn't be too happy with Travolta here).  While the movie isn't overly scary, it is both exciting and interesting; the 98 minutes fly by, culminating in an unforgettable prom sequence and a "shock ending" that I'm sure thrilled people at the time but now seems rather passé.  Anyway - go watch Carrie, and enjoy a shining example of the horror genre.