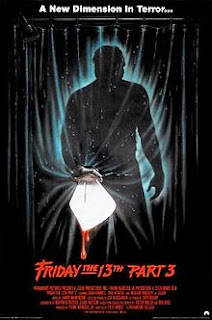 Plot overview:  Picking up on the same day that the last movie left off, Jason (Brooker) is now on the loose, roaming the area around his lake.  Unaware of the recent murders, a group of teens - including the kind but spunky Chris (Kimmell), the goofy Andy (Rogers), his nerdy roommate Shelly (Zerner), Andy's girlfriend Debbie (Tracie Savage), Latina friend Vera (Catherine Parks), and potheads Chili (Rachel Howard) and Chuck (David Katims) - take off for a relaxing weekend at Chris' family's lake house.  Unbeknownst to the group of carefree teenagers, Jason got to the lake cottage first.

So I'm still on my Friday the 13th binge, but I think I might have to take a break from Jason after this movie.  At this point the franchise is still enjoyable, but every movie is… uh… the same?  At least Part 2 and Part III are identical in the way the plot plays out.  It's becoming more and more obvious how horror film stereotypes developed in the '80s.

Before anything- Manfredini, what is with the music in the opening (and closing) credits?  We feel like we're at some '80s club and not at all in a horror movie.  Maybe teenagers liked it at the time, but oh my goodness was that music terrible (and secretly delightful).

One of the best things this installment had to offer was the cinematography that was made to be watched in 3D.  While I watched this on my computer and not in 3D, some of the scenes (like the yo-yo bit and some of the death scenes) really play with the image coming towards the camera/ audience, and it was certainly a lot of fun/ something different.

The characters in this movie really cracked me up, and while most of them were still pretty static as sitting ducks, we saw some more development than in prior movies.  The best thing about this movie - other than the hockey mask - was hands down the Chili and Chuck duo.  Starting with the gang thinking the Mystery Machine - I mean Chris' van - was on fire, the laughs never stopped.  Several scenes throughout the film of these two just sitting or lying comatose in their altered state made me laugh out loud.  Coming from a guy who doesn't typically love the dumb humor in horror movies, that says a lot.

Shelly was also a very interesting character here.  From the first scene where he begins pulling his dumb stunts, rocking that you-know-what-fro and an assorted array of costumes and props (what a weirdo), I practically convinced myself that we were going to have a final boy here due mainly to his virginal innocence and the amount of camera time this sucker got.  A guy with low self confidence like that should be lucky to spend his final day with girls like Chris, Debbie, and Vera (ow oww).  We root for him as he stands up to the biker gang - quick aside: why? why a biker gang? why random leather-clad bullies? that entire plot bit was the most random and frustrating thing.  did random bully gangs exist like that in the '80s? I'm going to say random one more time for good measure. - or wins the apple juggling contest, but even his loser charm isn't enough to save his life from Jayjay.  In fact, is Shelly the most tragic character we've seen in a horror movie?  Dumpy, overweight nerd with not enough self-confidence to accept that Vera has been set up with him for the weekend, doesn't even get a kiss out of her before having his throat slit.  Whoops, spoiler alert.

Chris was easy to fall for.  Although her tiny body and pitchy voice might be the source of annoyance for many viewers, Horror Buff fell for her rather quickly.  This girl was a fierce final girl, like not once did she let her guard down.  Girl played defense the whole game through the fourth quarter in the barn. Dead boyfriend thrown through the window?  No biggie, she grabs any household item and goes lethal on Jason's behind.  Car out of gas and falling through a non-sanctioned bridge while a masked murderer is chasing you?  Like borrringggg, girl runs through the woods expertly until finding safety.  Trapped in a barn about to meet your maker?  Nuh uh, girl grabs all kinds of weapons and axes Jason in the face.  This girl could survive any horror movie, hands down.

This has also been the movie in which we see the most of Jason, who takes on more of a bumbling Michael Myers persona as opposed to the silent, unseen stalker we've been used to up until now.  I guess we can ask ourselves why is Jason no longer confined to hiding in dark spaces and woods, and also has his MO changed?  We get that this new batch of teen victims are in the same area where the previous two films have taken place, but are they even really on Crystal Lake?  Aside from a news broadcast in the beginning of the movie, there's no mention of the camp, previous murders, or Jason Voorhees.  Is our killer still defending his turf here, or has he just been driven to some demented rampage?

Unfortunately, with Jason getting all this new screen time, he's a lot more open to criticism here - and I didn't really like him.  I'll admit that I was most excited to watch this movie to finally see the hockey mask, but otherwise I thought that Brooker portrayed Jason too heavily with a mental disability that we've been led to believe he has/ had as a child.  In earlier films, the scares depended on suspense coming from the killer hiding out in dark corners, throwing bodies through windows, or waiting under beds for some unsuspecting teens (come to think of it, all of those things still happen here).  Any confrontations in previous movies resulted in almost immediate deaths, save for the final girl who consequently engages in a drawn out series of cat-and-mouse where we see that the otherwise invincible Jason can, in fact, be temporarily knocked out by having various lumber and weapons thrown at him, only to watch him rise and attack again… oy this is getting repetitive.

This time around, instead of only hiding in his favorite spots, Jason also lurks and stalks in the open, and we as viewers become much more accustomed to his body language, fighting techniques, strengths, and potential weaknesses.  Not that I'm saying that an unseen killer is that much more interesting movie after movie, but I certainly think that Jason was really dumbed down here.  Especially towards the end of the film with the endless pursuit of Chris, we become aware of how clumsy he is in his brute strength, and the several times that we see his disfigured face we're reminded of a dopey, color version of Lon Chaney's famous monster.  I'm pretty sure there was a grin on his face, right?  Or is it just slanted that way?  Oh well.  Also, what's the mystery bit about Chris and Jason's rendezvous in the woods?  She blacked out after being dragged away by him - what was the point of including that episode and what are we supposed to assume happened there?  Or is it just a loose end?  Not my favorite.

The ended of the movie needs to be discussed.  We've seen the *surprise-dead-murderer-jumps-out-of-the-lake-and-grabs-final-girl-just-as-we-thought-it-was-safe-but-oh-no-wait-that-was-all-a-dream* in the first movie, and a similar on-land sequence in the second movie.  Like OKAY franchise, we get it.  You like the shocking endings (that are no longer shocking).  And this time they even had Momma Vorhees jump out of the water from beyond the dead, just for shocks sake (PS that slow-mo took way too long and made it not scary whatsoever).  But no, wait, it was a dream, AGAIN.  And then - as if Paramount would have ever dropped this franchise so young - we see Jason's body being completely ignored by the police because, hey, he's dead so why should we bother taping off a crime scene?  But no, boys and girls, the nightmare doesn't end here, nor did any other horror franchise of the '80s, so I say viva la teen slashers.

Final critique:  In many outdated ways, this movie begins to remind us of our favorite love-to-hate (or hate-to-love) teen slashers from the '90s and 2000s (think Freddie Prinze and Neve Campbell.. mmm).  While this movie isn't particularly scary (at all), it's the type of film that comes to mind every time we spend a weekend at the lake house, wondering what's lurking upstairs behind all the pine and tacky decorations, or what's creeping outside in the woods.  What this film certainly is is enjoyable.  We have a fun cast of characters getting slain one by one by a not-so-fun demented killer in an iconic mask.  The deaths are creative in their own way, and aside from this movie completing the very cliches its prequels established, it's a good watch, perfect for sleepovers and lazy summer nights.