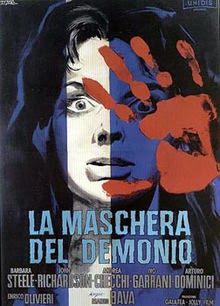 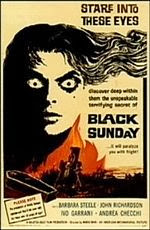 Plot overview:  In the year 1630, the witch princess Asa (Steele) and her evil lover Javuto (Arturo Dominici) are being putting to death by having satan's mask nailed to their face and then being burnt at the stake.  Moments before her death, Asa vows that her evil will live on through the centuries as she haunts and kills the descendants of her pious brother.  Two hundred years later, Dr. Kruvajan (Andrea Checchi) and his young assistant Dr. Andre Gorobec (Richardson) are passing through the Moldavian countryside when their carriage loses a wheel.  As their driver - who is frightened by the supposedly haunted area - makes repairs, the two good doctors enter an old chapel where they find Asa's grave: her face is still covered by satan's mask and a large cross on her tomb is said to keep her evil at bay.  As they leave the crypt, Dr. Kruvajan accidentally disturbs Asa's tomb; meanwhile, Andre encounters the beautiful yet distant Princess Katia (Steele) and is immediately smitten.  As the ghost of Javuto returns to haunt the castle and Katia's brother (Enrico Olivieri) and father (Ivo Garrani), Andre becomes resolute to rescue Katia from her cursed fate.

There was something oddly charming about this movie.  While the American version was almost bewildering at times with the English-dubbed-over-English bit, the mismatched speech and dingy atmosphere of the film became easy to overlook as a beautiful storyline and passionate although melodramatic acting took its course.

I watched this movie over the course of two nights before bed.  The black and white filming gave the whole film a sense of subtle fright with obvious allusions to a classic era of Hollywood horror.  The truth is I didn't take this movie entirely seriously - cheesy script, schmaltzy music, a few bad props, and I can't stress the word 'melodramatic' any more - until I found myself halfway through it and really invested in what was going to happen.  This was quite unlike most horror movies I have seen, with the main antagonist remaining physically dormant for the most part while spiritually and psychologically active.  Beforehand I had read that this movie was banned in the UK for about 8 years, that it was so frightening at its release because of its gore, yadda yadda yadda, so of course in watching this heavily edited American cut I was confused as to how (a) anyone would find this so scary (b) anyone would think this 'too gory.'  Mind you, the American cut did remove several scenes and sequences involving blood and gore.

Speaking of which, I think the whole mask of satan (think mini iron maiden) was a cool prop, but even cooler/ grosser was the mark it left (literally) on Asa's face.  Horror Buff admits he has an irrational fear of fleshy/ gory holes such as those we saw covering Asa's pretty face (as well as on innocent things like  orange navels or pomegranate membranes… yuck), so needless to say that hit close to home.  The whole motif of eyes (big and bright and moist and pierce-able) made Asa's face that much creepier.

I was not familiar with Barbara Steele before this movie (bad Horror Buff!), but she really was an intriguing actress.  I've been staring at pictures of her face now trying to understand why it's oddly beautiful somewhere beyond the full head of dark hair, the wide-set eyes, the delicate features.  While Princess Katia is supposed to be somewhat emo, I still liked her.  I actually liked all the actors in this film, regardless of how silly they were running around castles and whatnot.  Perhaps even scarier than masks and gashes-on-the-face was Javuto as he just strolled around the castle with his pasty face and piercing stare.  Like that was really creepy.

What didn't work for me: I'm pretty sure that they mentioned vampires like a thousand times, but that the whole concept of being a vampire was very different/ nonexistent in this movie.  I have read that originally Asa and Javoots McGoots had fangs when they started filming, but that they were later scrapped.  What I take from this is that Asa got to be a princess, a witch, AND a vampire.  Some people have all the luck.

I hate to say it, but this movie reminded me of The Terror.  As this film from the yesteryears of the Horror Blog is 3 years the senior of Black Sunday, Horror Buff has to wonder if whatever dull team brought us The Terror drew some inspiration from this Italian piece.  I mean, two horror protagonists named Andre within three years?

Lastly, a quick fun thought: is this the first movie to ever take place is Moldavia?  It's so nice to take a break from Transylvania for once, you know?

Final critique:  This is a pleasant watch with few scares but a good amount of scary thrills, if you catch my drift.  It was perfect as a late night movie, one I would love to catch on TV in the early hours of the morning when curled up on a couch.  The American cut really isn't too gory, and it's funny to think that at one time people were afraid of this movie.  Of course this falls under the 'too old to be scary' category, but hey, Black Sunday has got a lot of heart and some artistry in the sets and score (changed in the American cut.. mama mia).  This movie rightfully earns its spot as a cult classic.