I really have no idea what happened to my write up about E12. 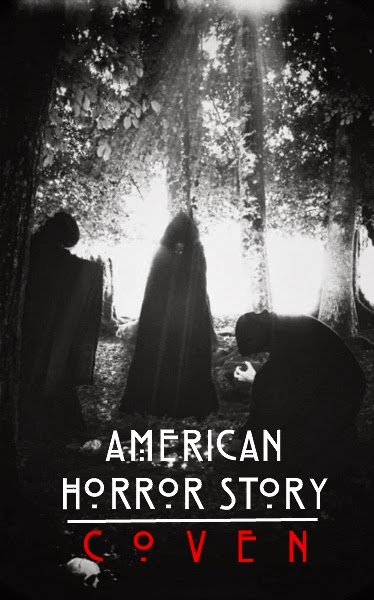 Plot overview:  To assure the survival of the Coven, the remaining witches at Miss Robichaux's must compete to perform each of the Seven Wonders so that the true Supreme may claim her throne.

What a way to end.  I will first say that my general, honest impression is that I liked the episode a lot and loved the season, and furthermore that this has been my favorite season so far.  Let's get down to brass tacks.

Just oh my gosh I guess is what I have to say first of all.  Can't believe it's all over, as soon as it started. Is it me, or did this season fly by?  Let's start at the beginning.

There goes Stevie Nicks again just singing her heart out.  I thought it was a groovy albeit overly stylized way to begin the final episode; regardless it was appropriate.  By this point I was just ready to get started with the Seven Wonders, as I think we can all agree that this season did unfortunately lack in magic - the very thing it was all about… or was it?

Feminism.  Motherhood.  Sisterhood.  (Unfortunately, themes of racism sizzled out this season) Between the remaining young women at the school, it was a competition to the death to determine who could lead the Coven forward.  It was interesting to see the [surprise?] return of Fiona (Lange), her sudden death, and the conclusion or not of her story.  What does she then die representing?  Horror Buff dares to say that she in her prime, Supreme glory represents a powerful, uninhibited, and unrestrained woman.  Not only does she have magic, but she has looks, money, charm, smarts - and freedom.  That's not to say she doesn't have vain desires of external beauty and the want of a man's affection.  Unfortunately for her, she cannot keep these things forever.  Her hell?  The married, domestic life (and knotty pine).  Is there commentary about women here?  I think so, at least to the extent of freedom and marriage/ domesticity.

Anywho.  Do the Seven Wonders deliver?  Maybe not as much as we hope they might, but they are still entertain, with a few untimely deaths scattered about.  Speaking of which: Misty Day (Rabe) - what was her point ever except to bring everyone back to life and link us to Stevie Nicks?  One critique I most certainly have about this season was that it was too filled with enticing details that distracted us from the characters themselves - what makes them tick?  And what ever happened to all those random plot lines, like Delia's (Paulson) attempt to conceive, way back when?  Why is Madison (Roberts) so heartless and one dimensional?  Does Zoe (Farmiga) still kill boys when they… you know what?  Why was everyone so willing to let Queenie (Sidibe) back into the club after she ditched them in the first place?  Was Delia really not an obvious choice for leader from long ago?

Speaking of Delia - severe kudos need to be given to whoever does her costume and make up because Sarah Paulson was absolutely stunning all season long with and without peepers.  Never do I remember an AHS character looking so glamorous and hot regardless of the despair surrounding them.  Delia was a character I admit to have doubted at more than one point this season, but now that Coven is done with, I will be the first to admit how happy I am and yet still shocked: a happy ending?  Did American Horror Story really just have its first truly happy ending?  Sure, sure Fiona is stuck in her own little hell, as are several other characters, but Zoe is still safe (I don't see why her little accident took her out of the running for Supreme once she was revived).  Was anyone else expecting Fiona to kill Delia in that last reunion?  Or for Myrtle (Conroy) to suddenly go berserk and destroy the Coven?  I admit I am guilty of both of these things as I spent the entire episode waiting for everything to go wrong, as previous seasons have taught us to do.  And yet - the silver lining at the end of Salem's cloud.

I'm going to take a second hear to voice my unpopular opinion about something, or someone.  I don't think Emma Roberts is all that great.  She played exactly the same character in "Coven" as she did in We're the Millers - and that simply shouldn't be so, but why is it?  Because this young actress relies on her 'looks' and attitude… like okay, we've seen that before.  I don't think she's a bad actress, but I don't see what everyone is obsessed with her.  I'm certainly expecting to see more of her though, so I can only assume her skills and characters will improve along with her!

Final critique:  Well, another year, another season done.  Another multitude of witches out of the closet.  While this season certainly had a few plot holes, unnecessary zombies, and a lack of magic and character depth - it was really magical from day one.  Perhaps the worst thing about this season is that it was not scary- like, ever.  I remember when it premiered and everyone on social media set their 140 characters to caps lock to express their horror and shock at the show's debut.  Nope, not here.  Secondly, this season really did tend to drift all over the place (not unlike the previous two seasons, though, I guess).  There were good times, and there was plenty of down time, but this was another fantastic season delivered to us by Murphy and Falchuk, filled with plenty of Lange's graceful diva ability, along with hearty amounts of ingenuity by Farmiga (who I loved - and who is starring in the recently released thriller Mindscape) and Paulson.  How much longer can AHS keep it up?