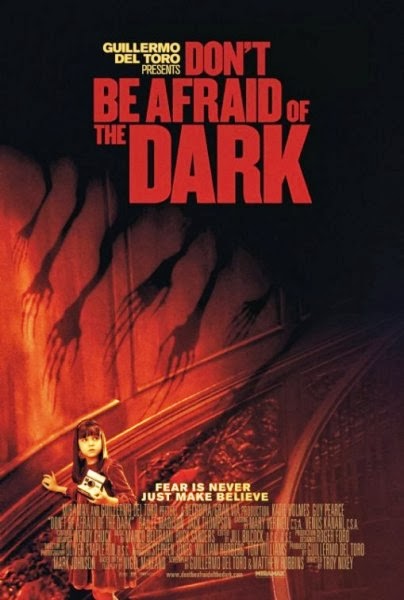 Plot overview:  After being sent to live with her father (Pearce) and his girlfriend (Holmes), the precocious Sally (Madison) feels more distraught and misunderstood than ever.  This starts to change when what she imagines to be small fairies begin coaxing her from inside the walls and out of sight.  As Sally grows more determined to learn more about these creatures and prove that they exist, terrible things start happening to the house and its inhabitants.  Will anyone else believe Sally about the creatures before it's too late?

I stumbled upon this film because its impressive score was written by Marco Beltrami, the same composer who orchestrated many other well known horror films such as The Woman in Black and the Scream franchise.  By the short summary I read about the movie's plot, it seemed like the type of story I would really enjoy.  Normally I love what Guillermo del Toro does to films (The Devil's Backbone), fully aware that he heavily mixes fantasy with horror a la Brothers Grimm, but I suppose I should have known that shortly after Don't Be Afraid of the Dark began that I was perhaps seeing a piece with too much of the former and not enough of (my preferred) latter.  That is to say from Beltrami's sweeping score to the heavy dependence on cartoonish CGI, the movie feels like an animated, fantastic story from the beginning, sorely taking away from tons of horror potential.

That's not to say that there weren't some scares, just that this isn't my preferred style of horror.  I admit I haven't yet seen the 1973 made-for-TV original version, which I hear delivers more than this remake.  Regardless, the prologue to the film was pretty disturbing if overdone, and I guess I thought that the last sequence in the basement sort of grossed me out by surprise for about a split second.  Otherwise this was like a less historical and perhaps more malevolent Pan's Labyrinth.

What was good?  I thought the acting was on spot.  Of course we have a surprisingly demanding role in the hands of a child, and Bailee Madison (whose name sounds too much like Billy Madison) delivers, even if we don't like her because the entire character of Sally is dark and disturbed and whiny and annoying.  Though to clarify: I was sick of Sally, and not Bailee.  Are we ever really worried about Sally's well-being, though?  Not if we've studied the rules - which generally makes the film all the more [predictably] anticlimactic whenever we are presented with a child in peril.  The gardener Harris (Jack Thompson) delivers a cliche but eerie role mainly due to his raspy voice.  For me, he really stuck out from the rest of the cast, at least earlier on in the movie.  Katie Holmes was Katie Holmes, and while her character Kim doesn't ever really reach that level of deep believability that a complete character hopefully achieves, I thought she was still convincingly caring and patient and concerned.  Guy Pearce almost convinced me with his American accent, almost as much as Alex convinces us that he is a responsible father.  Whoops just kidding you're shallow although I can respect that the man is driven.  Alex represents a good point in fantasy plots such as this one, that being the realistic side of the story, the practicality that balances Sally's fantasy and Kim's willingness to believe.

Like in other del Toro works, the viewer here is a presented with the dilemma of whether or not he or she chooses to accept the fantasy within the film.  The characters are often faced with this decision as well, resulting in some that accept the fantasy and others that remain firmly in reality.  Is Sally a medicated, depressed child who invents these creatures to keep her company during her lonely experience in a new, unfamiliar, and frightening place?  Are they her imaginary friends helping comfort her from life with her estranged father and her replacement mother?  While I think the movie makes it pretty clear that these monsters do exist, stranger things have happened.

This movie moved along pretty slowly, with plenty of build up and plenty of unnecessary plot - I was most ticked off by the totally irrelevant inclusion of a tooth fairy plot - resulting in not much delivery.  And good acting aside, our big names like Holmes and Pearce are clearly limited at times by the script/ plot.  At times this really didn't feel like a horror movie at all, which irked me while watching because I was really in the mood for a good movie.  Well you can't win 'em all.

One thing that certainly bothered me about the movie was the monsters themselves.  I can understand how hard it must be to sort of dream up and create a new monster that we haven't seen done before.  That's not to say that these things weren't creepy (I've always thought that creatures of precisely that size and height - like not quite above your shin - are especially discomforting).  I just don't really think they were scary.  Also, they're locked behind this old coal chute which seems to keep them at bay - only isn't the coal chute directly attached to the house's ventilation system which they then travel through for the rest of the movie?  Were they already traveling through the vents before Sally opens the chute door?  I don't remember at this point, and I'm not sure I can enough to go back and look.

Final critique:  This film really lies more in the dark fantasy realm than in the horror realm, though I'd give it 'terror' at its scariest scenes.  There seems to have been a lot of ideas put into this that maybe were more important before filming but never were fully carried out/ completed in the film's final cut (aka loose ends).  Basically we have a lot of cliches, a lot of build up, some suspense, and not tons of delivery.  Still not a terrible watch, filled with plenty of fairy tale charm as far as the mansion, gardens, and music go.