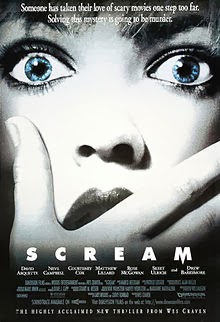 Plot overview:  A year after the rape and murder of wife and mother Maureen Prescott, the small town of Woodsboro is once again haunted by the onset of a new string of murders.  Maureen's daughter Sidney (Campbell) soon becomes the center of the masked serial killer Ghostface's plot, and everybody is a suspect.

I love this movie.  Love it.  One of my favorites, hands down, just because of what it represents.  The Scream movies were heavily influential in Horror Buff's adolescent years, so they bring back good memories.  I mean, how can you beat Wes Craven (A Nightmare on Elm Street, The People Under the Stairs, Wishmaster) plus a full cast of celebs in a film that brought the dying horror genre back to life?  Answer: you can't.

Scream is the beginning of a whole new boom for horror movies (and parodies), especially those from the late '90s through the mid 2000s that I especially love so much.  The best thing about this movie, though, is that it's still scarier and takes itself more seriously than, say, the I Know What You Did Last Summer franchise.  Sure we have a few laughs in this one, and sure Matthew Lillard's tongue seems to fall out of his mouth every time he speaks, but I think mainly due to Neve Campbell (swoon) and Courtney Cox's (swoon harder) ability to stay serious and focused through the film (not to mention a psychotic killer who doesn't make a fool of himself and just a hint of gore), we actually have something scary on our hands.

Originally titled "Scary Movie" (ohh the parodies to ensue), Scream very cleverly plays upon the tropes of your standard horror film.  In fact, for young Horror Buff, this movie was very influential in summarizing ideas that would later influence my rules for horror flicks.  I absolutely love how screenwriter Kevin Williamson manages to pay homage to some of his own favorite movies, such as Halloween (twins!!) through allusions in the script, music, and even film within the film.  The quick sequence with the Woodsboro High School custodian "Fred"sporting Freddy's sweater (and job) from Wes Craven's own Nightmare on Elm Street franchise deserves a special shout out.  Somehow, Williamson found a sweet spot in horror after cliches had become cliche but before they had become sour, and he played on those to make a brand new iconic murderer, who in this film has both a scary, complicated, and twisted motive in mind.  In 1996, audiences were probably fed up with the teenagers being slashed concept - but Scream presents it to us in a whole new way, with new speed and fear, without forgetting its own roots.

Ghostface is wonderfully frightening, with a sickening balance of craft and creepiness, sanity and total psychosis.  Just as much as Michael Myers scares me for being slow and impassive, so Ghostface freaks me out because of how fast he is!  One of my biggest fears is the feeling of someone or something following me - so while I always like to convince myself that I could hide from or outrun Michael Myers (laughs ensue), watching Ghostface just sprint around all over Woodsboro, tackling plenty of furniture along the way - and especially that little move of not being able to fit through a door but wildly waving his knife-wielding arm around inside the room - frankly scares me.  While perfectly human, Ghostface conveys a superhuman sense of durability, stamina, and stealth.  I think it is so genius that the makers of the film used a regular, actual mask sold at stores.  Like reality meets merchandising?  Yes please.

The acting is good in this movie.  Neve Campbell as Sidney is cool and calm (maybe too calm towards the end) and kicks ass as our typical final girl.  Monica Geller is spunky, fun, tough, and wears a neon yellow skirt suit.  What more is there to say?  While the dopey character of Deputy Dewey (Arquette) puzzles me and to this day I think that in this movie he's actually his parodied version from Scary Movie, it's cute to watch him and later real-life wife crush on each other amidst a spree of teenage murders.  Matthew Lillard and his tongue in the role of hyper teenager Stu Macher is crazy and frankly pretty weird, but he's also fun and carefree as I imagine all teenagers in Cali to be.  While boyfriend Billy Loomis (Ulrich) is brooding and often insensitive, he is suave and believable.  Even Sidney's blonde bestie Tatum (Rose McGowan) - a role often left victim to every stereotype of ditzy - seems like a normal teenager.  All of these believable teens plus both scary and humorous scenes starring Drew Barrymore, The Fonz, and Liev Schreiber (why don't I like him?  Probably because he played Lyndon B. Johnson in The Butler) can only result in a big billed horror success.

The plot is good in this movie.  The motives are questionable and everybody is suspicious.  Ghostface seems to be in two places at once, and one by one we find ourselves questioning Sidney's friends and perhaps even Sid herself.  Where is her dad?  Is her mom really dead?  What about that meddling reporter?  All of these teens in Woodsboro seem highly knowledgable about horror movies - have they just been doing research?  The phone call sequences are creepy and I admit that I am guilty of reenacting them upon unsuspecting friends.  Basically this movie stays fast-paced right up until the very end- managing to use, build upon, and then even break horror stereotypes along the way.

Final critique:  Not much else to say except watch this movie.  This is one of my top recommendations to any variety of audience looking for a good but fun horror movie.  Gather around the TV with friends late at night, or cuddle up with a special someone (or a bowl of popcorn).  Be advised that there is the slightest amount of actual gore but a decent amount of corn syrupy-looking blood, as well as plenty of scares and things that go bump in the night.  Regardless, Horror Buff will tell you to toughen up, and get this movie on VHS… I mean… whatever it is folks use these days, and allow Scream to take you back, back to the last millennium and the good old days of splendid teen horror movies.