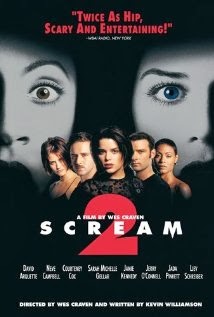 Plot overview:  Two years after the events of the first movie, Sidney Prescott (Campbell) and fellow survivor Randy Meeks (Kennedy) have put the past behind them and moved onto new life at Windsor College.  Unfortunately, it seems the past is not as willing to let them go as a copycat Ghostface begins a new killing spree at Windsor, attracting plenty of media attention as well as renewed coverage by the now well-known Gale Weathers (Cox).  One by one, the new Ghostface attempts to finish what the first Ghostface started.  Will Sidney and friends be able to survive a second time?

As much as the first movie played on the tropes of teen slasher films, Scream 2 satirizes your stereotypical [horror] sequel, going so far as to dedicating decent amounts of plot time to character discussions about movie sequels.  Lolzz inception.  That being said, while the film adds some novelties and plot twists, it ultimately adds few real nuances to the genre or to the plot of the previous film.  That is not to say, however, that this movie is not a really fun ride, because I think it is just as enjoyable as the first one.  And while in WBAI Radio's (?) boast that this sequel is "twice as hip, scary, and entertaining!" - well normally I would tend to discard any acclaim that uses the word 'hip' in a non-ironic way, but this time around I might just agree.

We are presented with an impressive cast of celebrities in roles both large and small.  Drew Barrymore inspired legitimate actors to take horror movies more seriously after her cameo in Scream, leading to similar cameos by Tori Spelling, Luke Wilson, and Heather Graham in "Stab" the movie-within-a-movie that we see in theaters at the beginning of the film.  Viewers playing close attention will perhaps catch the relation between Spelling's role in "Stab" and a joke made by Sidney in Scream saying that if a movie were made about Woodsboro she'd probably be played by Spelling.  Fictitious reality meets reality meets fiction within fictitious reality?  Again, inception.  We are treated to a sort of prologue starring Jada Pinkett (pre Will) in a sequence that makes us question our own security at places like movie theaters or other gatherings involving large crowds of masked people.

Cameos aside, the supporting cast here is surprisingly filled with stars as well.  Alongside his son and future daughter-in-law we have Lewis Arquette as police Chief Hartley.  In two of the best and somehow obnoxiously-subtle roles of Sorority Sisters Lois and Murphy we have Rebecca Gayheart (Urban Legend) and Portia de Rossi, respectively.  These two girls crack me up every time I see the movie.  Lastly, how could I forget Sarah Michelle Gellar ('modern' scream queen, I Know What You Did Last Summer) as sorority girl Cici, who for some reasons unbeknownst to us viewers stars in a rather large sequence of the film.  Still, she's ditzy, resilient, and puts up a good fight.  Gotta' love her.

Then, in the top-billed cast, aside from our old friends from Scream, we have a big, boyish performance by Jerry O'Connell aka an older and muscular version of Vern from Stand by Me, which if you haven't seen I'm going to need to you x-out of this blog now and go watch.  Immediately.  Go watch Stand By Me.  If you're still reading this you're doing something wrong.

Now that we've narrowed down dedicated readers from those who have never seen Stand By Me, we can move on.  Acting in the film is good, if not always believable it's certainly enjoyable.  We have our standard 'college' film here although thankfully not every over-the-top stereotypical character is included, so that's a breath of fresh air.  We again become deeply involved in the plight of Sidney who is a pretty fantastic heroine although I'll say again my one complaint is that I think she is somehow too tough and considering the amount of people dying around her and even because of her, I think she becomes a little less realistic.  But hey, she's fun to root for.  Liev Schreiber makes an actual appearance in this film as the recently exonerated but still not entirely sane Cotton (that's not actually a first name, right?) Weary, and personally I think he receives an A+ for creepiness although he is too obvious to be guilty.

Much like the previous film, in Scream 2, pretty much everybody is suspicious at one point or another.  After all, so many characters involved with the first set of murders have returned either to protect Sidney or even to profit on the new crimes.  Aren't they likely suspects to continue Ghostface's legacy? Or perhaps it's a newbie, such as seemingly perfect and caring boyfriend Derek (O'Connell)?  Unfortunately, this time around, Ghostface's identity is even more difficult to guess than it was last time.

Scare-wise, this isn't the scariest movie out there, but much like the first installment in the franchise, there are a few good moments.  This mainly revolves around Ghostface creeping around in the background (Horror Buff loves shots like that) or rapidly pursuing his prey.  Again, it is Ghostface's speed that truly freaks me out.  Even more so than in the first film, we see Ghostface's iconic wipe-victim's-blood-off-knife-after-kill plus his violently-wave-knife-in-the-air-when-you-can't-fit-through-the-door that bothers me so much.  Sometimes, the desperate attempt is more unnerving than a silent approach to murder.  Sometimes.

Fun fact: Upon completing a large portion of the script, screenwriter Kevin Williamson found that his work had accidentally (?) leaked all over the internet - damn pre-Y2K technology!  This led to major setbacks in development as many of the film's secrets were now public.  Williamson and Craven had to change a lot of the movie's plot, including the identity of Ghostface, and they even resorted to only distributing the script to actors of specific days of filming to prevent another situation.

Final critique:  This is another great installment in the Scream franchise; think "Ghostface: The College Years".  Complete with good acting, an enticing although heavily emphasized and satirized plot, and an incredible ensemble of celebrities, this movie is among the crowd favorite to go with a late night snack or a high school sleepover.  Don't let the teen label distract you, though, there is real merit to this film.