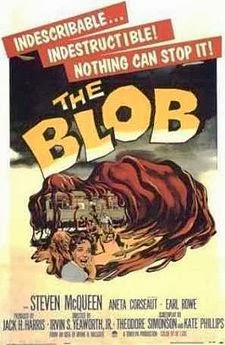 Plot overview:  While spending an evening at lover's lane, smooth-talking Steve (McQueen) and the innocent Jane (Corsaut) see a meteorite crash over a nearby hill.  What they don't know is that the meteorite contains a seemingly unstoppable, blob-like alien that consumes any living organism that crosses its path.  Steve, Jane, and their friends find themselves in a race against the clock to stop the growing monster as it continues to claim its victims, but will the teenagers be able to convince the adults in town about the impending danger before it's too late?

We have a true classic of American horror here; regardless of reception and success, I like to think that people have at least heard of the blob or a similar monster that creeps, crawls, and consumes.  Young Horror Buff saw what he realizes now to be the 1988 remake of this movie and to this day remembers suffering from a recurring nightmare afterwards which involved my neighborhood being attacked by the eponymous monster from the film.  Well having watched this original version (for the first time?) I admit that this film couldn't possibly give nightmares to anybody, and that as the years go on I think this movie is slowly slipping into the "too old to be scary" category.

Nevertheless I admit that there were a few scenes, especially at the beginning of the movie, that did make me a little uncomfortable hence the D for scare score.  Honestly I wish I watched more monster movies, so I think watching this eerie glob of goo got me excited enough to allow myself to be frightened by several sequences in which it moves rather rapidly towards its next victim.

Unfortunately, after those principle scares I'm sorry to say that the film just starts to drag on and on with very little monster screen time and an awful lot of mediocre, naive 1950s acting.  It was almost painful at times to just watch these actors recite their lines or react to 'scary' sequences - worst shout outs go to Jane's parents, the blond member of the 'bad boy' trio (his facial reactions are the worst), and an extra special 'you're awful' award to whatever actor was the main fireman.  If I ever, ever encounter a firefighter who talks back to me in rhetorical questions during a fire- just grant me patience.  Even Mr. McQueen ends up getting so much screen time often filled with just reactions via face or gestures (rubbing his mouth or nose) that it begins to grow very old very fast.

In general, this movie is filled with a large amount of plot, and by the end of the 82 minutes we have seen the large majority of this time consisting solely of cantankerous adults complaining about and fighting with eager teenagers.  Let's not forget that there is also plenty of erroneous fluff such as a backwards car race, an old man (who appropriately sleeps in a twin bed next to his wife's twin bed) who isn't sure whether to wear fall-out clothes or fire clothes, and a(n admittedly adorable) little boy with no common sense but with a whole lotta lisp complete with cowboy gun - because, hey, it's the '50s.

Soon I will go back and watch the remake, which I'm sure will be filled with more monster time, deaths, and gore than this one (hopefully).  Then again, the fact that it's from 1988 is not too promising.

Final critique:  All in all, this is the type of movie I'd prefer to watch late at night on TV before (or while) falling asleep.  I would recommend this movie for most people, except I think realistically it would bore a modern audience.  Either way, The Blob has a lot of heart and a really good idea of a terrifying alien force coming to earth and attacking a small town.  I thought it was very interesting that they chose to set this movie in a real town - Downingtown, PA - where you can even go visit places such as the movie theater and the diner (in and around the area of filming).  Lastly, I read a really interesting piece about how the blob represents communism attacking small town America.  While it seems creators of the film deny this - I think it's a cool angle!