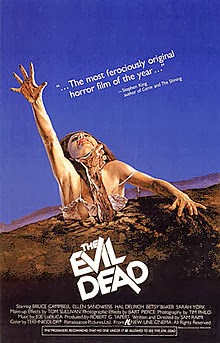 Plot overview: Five friends venture into a lonely cabin in the woods for spring break where they find an ancient text that awakens a terrible evil.

A cult classic in every sense of the word, this is the film that launched Sam Raimi (and Bruce Campbell)'s career as well as the first installment of the iconic franchise (of the same name). The story behind this hit horror franchise is really pretty interesting: Basically, producer Robert Tapert (married to Lucy Laweless) was roommates with Sam Raimi's brother in college, and over time the two became friends with a mutual interest in film and ultimately horror.  Match made in Michigan State heaven am I right? Two broke guys with useless degrees (or no degree at all) meet up with Campbell who has recently quit his job driving cabs, and the three young minds come together to write and produce this incredibly low-budget movie (~$375k) with a smash result.

Anyway, the gritty, difficult conditions the cast and crew had to suffer while filming this movie are what create the believable sense of dread and horror the movie boasts. In my opinion, it is a combination of this dirty, creepy cabin in Tennessee (where the whole cast and crew had to live and sleep during filming) plus the dangling, creeping, crawling, slanted camera shots that most unnerve us, leading to an overall uncomfortable and actually scary feeling while watching the film. Any time you have a small set to work in (aka a creepy, concrete, wooden, dirty, old cabin), small shots around doorways and hallways and cellars become your best friend to create a true atmosphere of horror and claustrophobia. Much like Ash (Campbell), the entire audience feels trapped during the movie, truly doomed with nowhere to escape to as the evil was just as much inside the cabin as without.

As far as plot goes, this movie follows some of the protocol of our well-known '80s flicks (this movie came out in the same year as both Halloween II and Friday the 13th Part 2) while simultaneously going so far as to truly coin the cabin in the woods as a horrifying and typical setting for the genre (perhaps with some kudos and inspiration going to Friday the 13th which was released a year earlier in 1980. Let's talk for a second about said cabin. Much like in other movies pertaining to the genre (Cabin Fever, Cabin in the Woods), the claustrophobic, old, and even grimy setting of such movies manage to play with our nerves from the very beginning. At least for me, being stuck in a small space that has already had the windows and doors broken down, unsure of where your assailant might enter through is one of the scariest situations— aka just about every scene of this movie.

The first installment of The Evil Dead has not yet entered into the overly absurd slapstick feeling that the sequels seem to rely on. I agree with the use of "black comedy" to describe this movie because at times you can't help but laugh, even if it is during a particularly gory scene. Speaking of which, one thing this movie certainly does and very much so is gore. Gore, fake blood, crazy (great!) makeup, puss/ milk, gore, ooze, goo, slime, muck, fake blood again, plus all other sorts of generally disgusting and disturbing substances (think Dead Alive at times)—cleverly paired with ('80s) humor, plenty of action, and a hero we find ourselves rooting for—was what put this movie on the map.

Fun fact: The now frequently used tagline "The Most Ferociously Original Horror Film of the Year" was coined by Stephen King when he saw this movie at the 1982 Cannes Film Festival. In an interview, King considered The Evil Dead his fifth favorite horror movie, resulting promotion and support from King propelled the low-budget film to great box office success worldwide.

The acting really isn't that bad here. We have the whole 'teenagers on break' thing going on, but without the typical sleaziness associated with those plots. While the acting in the beginning of the movie is pretty normal (random lines, small talk), the most impressive acting comes later from the possessed characters. I thought that the most unnerving (and equally most annoying) thing about this movie was the three girls—especially Cheryl (Sandweiss) and Linda (Baker)—when they were possessed. From the moment of their gruesome transformations, they do not ever stop shrieking and screaming, and their shrill noises frankly bug and upset the audience to the point that we, too, feel the psychological pressure that Ash and Scotty (Delrich) are dealing with. Campbell conveys a great sense of balance between true fear, emotional concern for his friends/ the loss of his girlfriend, and just the right amount of comic gestures.

The special effects are honestly not bad until the final scene. I was highly, highly impressed with the masks and makeup that characters had to wear especially after begin injured/ possessed. Unfortunately the climactic final scene becomes a bit hokey by modern standards when toiling claymation hurts the great progress that was made up until that point. Luckily, that same final sequence contains so much disgusting 'gore' (think various purees, goos, and bodily fluids) that we find ourselves squeamish enough to perhaps by distracted from the claymation (or not).

I'll briefly touch upon the infamous scene with Cheryl and the possessed, demonic tree branches and roots in the woods. That was a fairly weird sequence that disturbs a lot of viewers to this day. It makes us question was it necessary? Admittedly the scene was creepy and sensual, we're not sure of what we're seeing until it's too late maybe. It is perhaps the darkest scene in an otherwise not so dark (just bloody and creepy) horror movie.

Final critique: This movie is a fun and even disturbing watch. It is filled with plenty of action, screaming dead girls, pureed vegetables seeping from dismembered bodies, and a claustrophobic sense of doom. Then again, there's the pretty frequent one-liner or laugh that confuses us in our fear, making us question whether this is a comic book or true terror that we're witnessing. With just the perfect touch of literary inspiration stemming from H.P. Lovecraft, The Evil Dead explores both the teen and cabin in the woods genres of time period while drawing from hyper-hyper-animated Romero-esque zombie roots, all brought together with that uniquely '80s feeling. The result? An equally frightening and funny film sure to creep and gross you out no matter how many times you watch it.