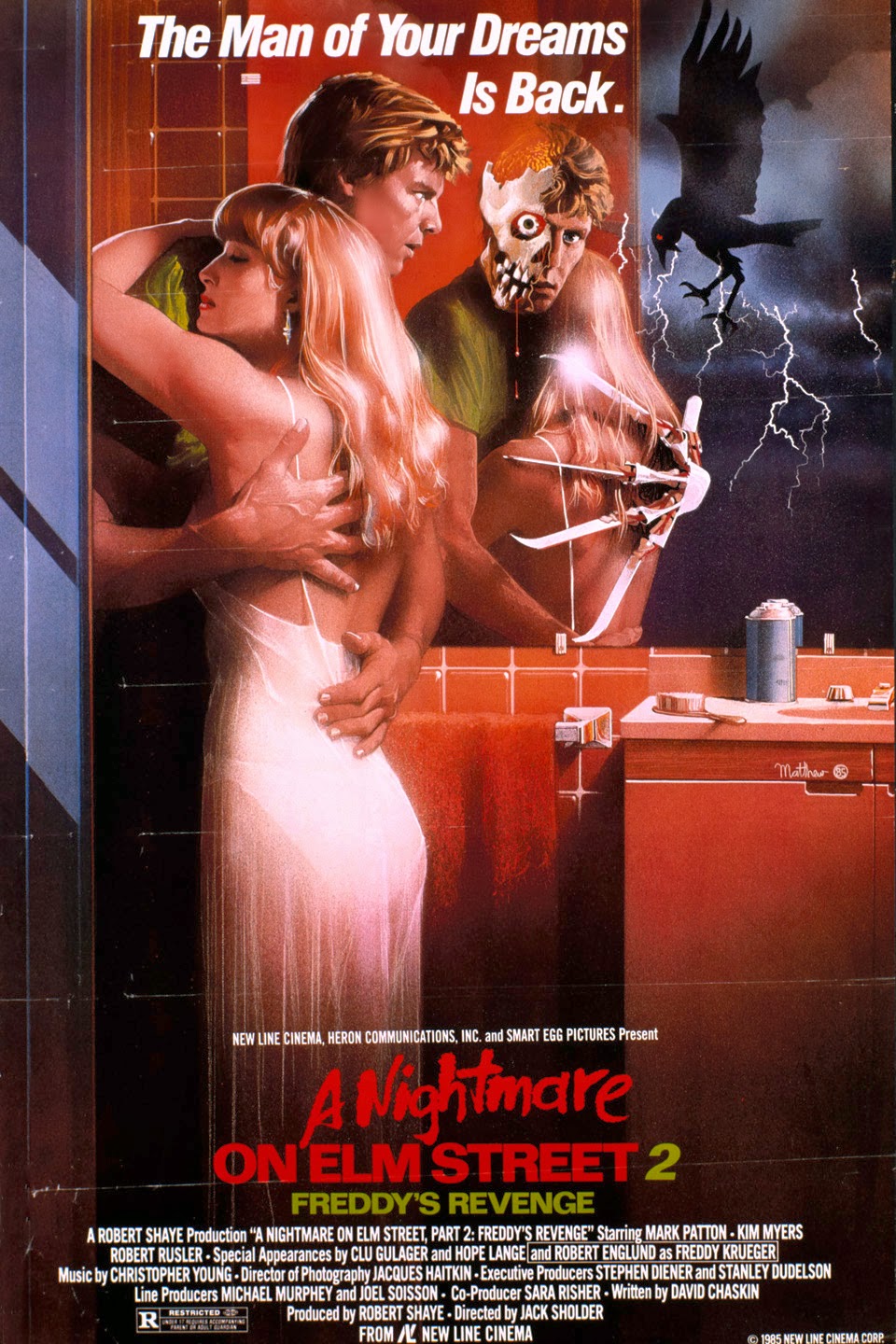 Plot overview:  A few years after the events of the first film, a new family has moved into 1428 Elm Street, and the teenage son Jesse (Patton) is already having terrifyingly realistic nightmares.  These nightmares largely revolve around a terribly scarred murderer, Fred Krueger (Englund).  This time around, he doesn't just want to kill teenagers, he wants to use Jesse's body to do so.  Worried that he is losing his mind, Jesse depends on the support of his [it's complicated with] girlfriend Lisa (Myers) and new friend Ron Grady (Rusler).  Will the help of his friends and family be enough to combat Freddy from taking over his mind and body?

The saga continues with this sequel, released only a year after the original movie (love a good horror franchise).  One of the best things this movie does, quite unlike other franchises at the time, is (almost) totally switch up the plot.  If this were your standard horror sequel, Freddy would merely be haunting Jesse in the same way that he haunted Nancy in the last film, simultaneously moving on to his friends.  This clever sequel, however, turns the protagonist's battle with Krueger into something not only mental but also physical, a haunting equally as diurnal as nocturnal.  Perhaps the greatest change we are given here is the fact that the protagonist and main victim of the horror is a teenage boy and not a girl.

While this isn't completely groundbreaking (in The Evil Dead our main protagonist is a college-aged male), it is certainly different than our typical damsel in distress in the horror genre.  Furthermore, unlike films such as The Evil Dead where the male protagonist largely fights against the given terrors, in this Elm Street installment, our protagonist is much more of a victim than he is a hero.  In fact, his debated saving comes at the hands of a girl.

Is that what's groundbreaking about this movie?  A debatably homosexual protagonist in a mainstream horror movie?  Truth be told, Horror Buff doesn't buy that theory.  If you watch this movie convinced that Jesse is straight, it still makes complete sense.  The boy is going crazy (like the last movie, we may very well debate that the horror sequences only take place in a fantasy world created by Jesse).  While Jesse's sexuality may or may not be in question, one thing that's certain is that he doesn't fulfill every standard male/ macho stereotype usually attributed to masculine characters such as Ash in The Evil Dead.  We see Jesse nervous from nightmares and social pressure, we see Jesse dancing (including some butt gyrating) while cleaning his bedroom, we hear Jesse's ear-piercing screams - true screams, not yells - several times throughout the movie.  Jesse is sexualized, often shown in his underwear, and at one point almost made to be the victim of sexual assault.  Forget final girls and forget jock boys that get killed off oh-so-close to the finale: here we have a masculine boy victim.

What's good about this movie?  As mentioned, the total change in plot is refreshing.  It also adds a level of psychological depth to the film as the main character has to truly debate whether or not he is going insane.  While there is plenty of time dedicated to plot development, when the scares come they're certainly fun, providing small thrills here and there.

The best scene of the movie, or at least one of them, has to be the pool party at Lisa's house.  When Freddy breaks loose here, he shows no mercy, and a TBP or teen booze party turns into an absolute bloodbath.  Seriously though, this scene is great.  I love when chaos breaks loose.  It's reminiscent of Carrie and the final prom scene, except with a creepy pedophile slashing students while fire seems to burst forth from everything.  Then, towards the end of the film we have a pretty gross burn sequence which alludes to Freddy's human demise and perhaps Jesse's mortal end.  This features some disturbing makeup and another Jesse being sort of born forth from the ashes aka burnt, charred skin.

Another favorite scene?  Shortly before Grady's death, we see Freddy literally bursting forth from Jesse's body.  I love the special effects here: a disturbing, Alien-esque birth of evil from a human character.  Gross and so smart.

The worst scene?  This probably has to be when the family bird goes crazy, kills it's companion, and then we literally have an unnecessarily extensive scene that can at best make us think of The Birds and at worst make us want to stop watching.

While our main characters all deliver some good or decent acting, my favorite has to be Kim Myers in the role of Lisa.  Does she not look exactly like Meryl Streep?  Also her acting is a breath of fresh air.

Final critique:  I'm keeping this review short because I watched this movie over a week ago and have sort of forgotten about other major points that I think I might have wanted to have touched upon.  Regardless, this is a truly well-done sequel, and while its scares don't necessarily surpass those of the first movie, the new cast and new plot keeps this franchise upbeat and interesting.  Stayed tuned as I review more Nightmare on Elm Street-s to see whether Freddy sinks or swims.