The movie that made you afraid to go back in the water... or the bath, or the shower, or to sit on the toilet. 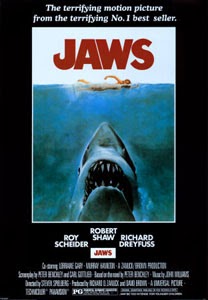 Plot overview:  Just as the summer season is about to hit full swing on the small Amity Island, a terrible and unprovoked shark attack leaves a young woman dead.  While local sheriff yet New York City native Martin Brody (Scheider) wants to close all beaches immediately following the discovery of the girl's mutilated body, Mayor Vaughn (Murray Hamilton), other members of the town council, and local business owners refuse to lose their summer customers.  As more attacks threaten the island's safety, fisherman come from far and wide on a shark hunt, but will they be able to outwit the great white monster?

This is not only an excellent movie, it is an important movie.  After all, this was America's first summer blockbuster.  Can you imagine a summer (or a halloween, or a holiday season, or any other sub-season) without its highly anticipated movie releases?

Jaws begins slow, and in fact it very much maintains that pace throughout, giving us one of the finest examples of suspense that we can think of.  I mean, sure, the movie begins with an attack on a really hot hippie, and there are a decent amount of gory attack scenes throughout, but the star of this movie is man and not animal.  Aside from on occasional fin, we don't see much of Jawsy until well into the movie, I think I remember timing it at around an hour or so.  There is really fine work done in this moving as far as plot development goes concerning the time spent on attacks (action) and the time spent on the human response (reaction).

Acting in this movie is both convincing and entertaining.  Leading us bravely through the entire film is Roy Scheider in the role of the out-of-place New Yorker that must learn to maintain his power as police chief while dealing with pressure from the local "islanders."  Brody represents the human conflict in the film, as well as a civilized yet masculine response to the chaos.  Representing science in a somewhat less masculine role is Matt Hooper (Dreyfuss), marine biologist and general shark nerd that lays down the voice of expertise and reason while the islanders panic.  Finally, as the ultimate '70s Ahab we have Quint (Shaw), a man's man (and fisher's man), war vet, probable alcoholic, and cold blooded, ruthless shark killer.  These three actors form the trifecta of manpower that is needed to try and defeat the shark- a seemingly unstoppable, prehistoric, bloodthirsty, and even intelligent creature that will outsmart its way into terrorizing the summer population of Amity Island.

While the first third of the movie is more relaxed while following the internal and legal debates of Brody (as well as his relaxing and even admirable family life- special shout out to Lorraine Gary in the role of spunky and ultimately concerned Ellen Brody, wife of the police chief), it isn't until later on that we move into the monster hunt.  The terror, therefore, much like the famous theme music (which is, perhaps, more well known than the movie itself), begins as something subtle, something we know is present or could present itself at any moment but which chooses to refrain from doing so until the right time.  Jaws is filled with plenty of tease scares, or even attacks we know are happening but with no true fright behind them (the horror, rather, awaits in the reaction upon the discovery of the death.  Take, for example, that mother on the beach when he son doesn't come out of the water).

It is the climax and falling action of the movie that takes us on the hunt, led by the no-nonsense Quint (who I love).  Together with the defensive Hooper (who provides an awful lot of comic relief) and our hero Brody, the team of three men sets off, giving us some back story on each of their lives as well as the realization that this shark is not to be trifled with.  In a series of somewhat repetitive scenes, as well as a not-necessarily-necessary-but-good-for-suspense sequence of Hooper being lowered into the water in a cage, the fight against the great white rages on.

Horror Buff was exposed to this movie at a surprisingly young age.  I have several distinct memories of watching this movie with other young friends while our parents would be in another room doing their adult party thing.  Since those wonder years, my favorite scene - and the scene I consider the scariest in the movie - has been the discovery of Ben Gardner (Craig Kingsbury) in his destroyed boat.  If I could watch that scene over and over again I probably would.  Every time, I know exactly what is coming, and it still always gets me.  I explicitly remember watching this scene as a child, and I was probably as scared then as I am now.  A+ terrifying.  I also remember from this time that my friends (other children) were scared to bathe, shower, swim in the pool, and one girl was even afraid to sit on the toilet after seeing this movie.  Talk about scarring!

The shark itself is an impressive beast.  I've read a lot about the different models they used and the ones that broke and the ones that didn't, and it's truly an endeavor of movie magic.  Sharks fascinate me.  And is it just me, or is the scariest thing about them their perfectly black eyes?  Gives me the creeps.  I read a lot of shark attack statistics following this movie, and it's true that Jaws has directly led to them being both hunted and smeared as human hunters- which, according to science, they really aren't.  Just curious little fellas willing to take a bite out of anything.  In many cases, after tasting bony humans, sharks decide they don't like the flavor and are on their way.  As a New Jersey native, I've also done some reading in my time regarding the Jersey Shore shark attacks of 1916 (which are cited as *true inspiration* behind Jaws... ugh), so I mean, sure, they're not entirely innocent either.  I suggest you watch Jaws and make your own educated opinion.

Huge question: HOW is the movie only PG?  While it isn't exactly dirty (some nudity at the beginning... gotta' love the '70s), it is disturbing and filled with human parts in and around a giant shark's mouth.  Like this is at least a PG-13.  I wonder what was going on with the MPAA while rating this blockbuster.

Fun fact: Horror Buff has both dove with sharks in the Bahamas near filming locations from Jaws: The Revenge and has also enjoyed some really tasty burgers in Menemsha on the Vineyard, the other principle filming location of movies from the Jaws 'series.'  Really I suppose I'm a secret Jaws enthusiast.

Final critique:  Everyone should see this movie.  Even the American government considers it culturally important.  Not convincing enough for you?  Consider this: we know more about outer space than we do about the oceans on our planet... and what lurks in them.  Jaws brings to the surface (ha. ha.) one of these mysterious and perhaps one of the most notorious hunters on our planet: the great white shark.  As this movie is equally as much about human drama as it is about shark hunting, there is drama, suspense, thrill, and even some comic relief, which means that most audiences will find something to love about this staple of the horror genre.