An American Werewolf in London (1981) 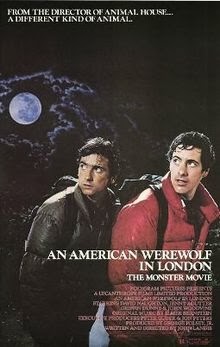 Plot overview:  While backpacking through the English moorland, American friends David Kessler (Naughton) and Jack Goodman (Dunne) stop at a pub full of morose locals who warn them to keep off the moors and "beware the moon."  Laughing off the townspeople's hostility and lack of hospitality, the two friends continue trekking through the night.  When the full moon comes out from behind the clouds, however, David and Jack find themselves lost, off the road, and being pursued by some animal in the darkness.  Despite their attempts to escape, they boys are chased and attacked by a large wolf, which manages to bite David before being killed by the locals.  When David wakes up in a London hospital three weeks later, he suffers from strange nightmares and visions of his dead friend who warns him that he is a danger to society.  Could Jack's warnings be right, and is David himself turning into a werewolf?

I watched this movie about three weeks ago, so my memory is a little rusty.  Most importantly, I thought this movie was surprisingly fantastic (although I guess it's not a surprise to all the millions of people who have seen it before Horror Buff and given it critical acclaim).  While there is a definite late '70s/ early '80s feel to the movie, it is by no mean dated, especially in terms of the expertly convincing and terrifying makeup and special effects.

The plot is fun, different, and easily fools us in a false sense of comfort because of the tragicomic nature of the film.  While our protagonists are almost always light-hearted and joking (in life and in death), the situations revolving around werewolf attacks are cold blooded, gory murders.  Basically we have the exposition and first attack in the moors, then a sort of flatline of "rising" action during David's time in the hospital, followed by the third set of more exciting rising action as David begins to feel the effect of the werewolf bite during the following full moon.  The climax of the movie perhaps comes with David's transformation in Piccadilly (my favorite word in the English language) Circus, resulting in one of the most chaotic (and awesome) scenes I have ever seen, followed by an almost absent denouement and an ending that leaves us wanting more.

Much of the movie's action in otherwise relaxed parts are driven by nightmarish sequences that take us by surprise and scare us in a confusing, unexpected way.  I absolutely loved the scene where David is back home with his family before nightmarish, futuristic stormtroopers break in and wreak havoc.  My other favorite touch had to be the incredible makeup used on the reanimated dead, the various victims of the werewolf.  I was surprised the first time we see Jack in the hospital, and each time he returned I was even more pleased with his decomposing self.  The realistic makeup that kept these characters as they might have been at the time of their murder added a strangely personal and colorful touch to the film.

While commenting on makeup and effects, I do have one criticism.  Although a lot of the effects from this film are still believable and enjoyable today, I was disappointed by the transformation sequence and the wolf in general.  The first wolf to attack the boys was fine (not that we see all that much of it), but when it's David's turn later on, the gremlin-esque, oddly proportioned werewolf and his stunted snout seemed far too animated and prop-ish to keep up with the calibre of the rest of the movie.  To clarify, I enjoyed the transformation itself (morphing hands and feet, etc), but the result was a bit disappointing.  Perhaps it was the proportions that bothered me most.  Oh well, one some problem in an otherwise grand movie.

The final climactic scene in the movie, revolving around David's transformation in Piccadilly Circus, is now officially one of my favorite sequences in horror.  The sheer chaos caused by a werewolf, police, citizens and tourists, and traffic had me cringing and laughing at the same time: it was horror entertainment at its best.  What exactly was the death toll here?  I'm not sure, but this was a fascinating final sequence filled with plenty of action, scares, gore, and pure delightful chaos.

Final critique:  Since happening upon this movie late one night, An American Werewolf in London has quickly risen towards the top of my favorite horror movies list (which I should consider actually making one day).  After 30 years and change, this film has delighted horror-going audiences with its expert makeup, captivating plot, and well-delivered scares and thrills.  This is certainly a movie I'll find myself going back to.  Recommended for any audience looking for good horror that also has a sense of humor.