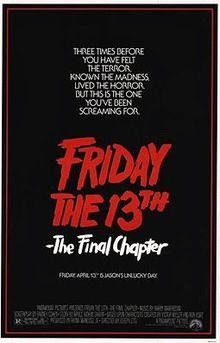 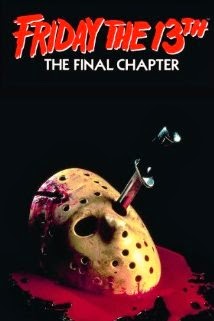 Plot overview:  Immediately following the events of the previous film, we are introduced to the Jarvis family, consisting of the recently separated mother (Freeman), blonde bombshell daughter Trish (Beck), and oddball son Tommy (Feldman).  Trying to enjoy a peaceful getaway at the lake, they have mixed reactions to the arrival of a group of teenagers at the house next door.  This time around, we have the big talker but poor performer Ted (Monoson), his best bud and recently single Jimmy (Glover), on-and-off sweethearts Sam (Judie Aronson) and Paul (Clyde Hayes), the shy Sara (Howard) and her crush Doug (Barton).  After escaping from the hospital where he was believed to be dead, Jason (uncredited White) returns to Crystal Lake and is very unhappy to find so many intruders.

It's really a wonder to me that the franchise didn't end, or come to a terrible, crashing halt, after this film.  Already by Part III, we are used to the blood bath Jason makes out of any unsuspecting weekenders at the lake (beware of West Jersey).  We were also already used to a lack of plot as well as kills that made it seem like screenwriters were crossing names off a list rather than creatively, purposefully murdering characters (and people think modern horror is bad with boobs and body counts... Friday the 13th doesn't hold back).  I'm not sure, then, just what we were expecting from Part IV - "the final chapter" HA big laugh 30 years later - because, with no plot and many senseless kills, this movie just brought us more of the same.

More stupid introduction.  Why is it that the creators of this franchise love using the first 5-10 minutes of each movie to recap practically all of the events of the previous movies?  It's so unnecessary.

More dopey teenagers.  Our cast of victims is colorful and fun as always, and this time around they might even just be sexier with teen idol Peter Barton (who talks like four times in the whole movie), beautiful yet annoying yet incredibly resilient big sis Kimberly Beck, and the unforgettable More twins Camilla and Carey as the shockingly uninhibited Tina and Terri; aka any teenage boy's dream multiplied by two.  Then hunky Rob Dier (Erich Anderson) shows up with a ridiculous backpack, a gun, and a machete, supposedly to 'hunt bears' although we know he has a bone to pick with Jason.  Our familiar, overdone archetypal 'horn dog' Ted is like any other big mouthed, self-proclaimed 'ladies man' in horror, Jimmy is pretty bizarre and possibly capable of murder himself since he's wound so tight, and then to round out our cast we have the completely one-dimensional Samantha who is cute but jealous, and finally Sara who's shy so her only way to acclimate to the social scene is to put out.  For Pete's sake, the girls' names are Tina, Terri, Sam, and Sara, and I think we see all of them at least partially naked.  There was certainly a lot of heart put into creating the female characters in this movie...

More kills that are swift and kind of scary but severely lacking in suspense.  Although we see a lot of Jason in this movie (more about that later), it seems we only don't see him right before a kill.  With our highest body count yet in the franchise, that's a lot of highly anticipated, totally expected kills that  average maybe 5-7 seconds of screen time each.  What I'm trying to say is boo, boring.  Sure there's a little bit of gore, but honestly each kill seems to be done with one cut to the leg or head, one impalement through the abdomen, one squeeze by an ugly deformed hand.  While they may momentarily startle us, the kills are not thrilling, and I think they're less creative than what we've seen in earlier installments.  So much pressure for screenwriters!  Seems like they just couldn't handle it.  The absolute best kill in the film, however, goes to Sara.  That was awesome.  Worst death?  Easy.  Rob's death was one of the stupidest things I've seen in a horror flick, more attune to a parody.  Who narrates their death while it's happening?

More teens breaking the rules.  Since Friday the 13th was one of the leading franchises in establishing the basis of these rules, I guess I shouldn't be surprised or bored given the amount of teen baseness here.  If I had to retitle this movie, I'd probably call it "The Short-Shorts Slasher".  This movie is literally a showcase of short shorts and boobs.  If that's your thing, I mean go for it, have a good time.  But does anybody live in a world where hot blonde twins just show up on the side of the road, only to suggest skinny dipping moments later - AND everyone complies?  Why weren't my teenage years like that?  I mean they were at times, but... well, that's another story for another time.  Yet still, in spite of all the horror movies I've seen, this one still surprised me with the sheer amount of spur-of-the-moment nudity, showering together, and towel-clad victims.  One of my least favorite scenes in this movie had to be the dance sequence, and no, I didn't mind when Crispin aka Jimmy (can't believe his name is Crispin) started rocking out to some typically '80s tunes, but then when all the mushy lovebirds put on like '50s dance music... what was that?  Like I'll be honest, I'm listening to a Big Band station right now on Pandora, but come on, why that boring slow dancing scene?  And so soon before their lives are cut short; what a tragedy.

More bumbling Jason.  Although I read that a lot of fans praise White for his Jason portrayal in this movie, all I could think while watching was that our number one nemesis just seemed a little too... I don't know... dumb?  I mentioned before that while slaughtering every teen at the one house we don't even seen too much of him (maybe a nod towards the style of the first film), but then he sort of stars in the whole sequence at the Jarvis household.  During this time, we see that although he is inhumanly strong and difficult to stop, he is also somewhat goofy, running around all over the place, slowing down after getting hit in the head time and time again.  Taking into account that Jason is supposed to be a sort of demented little boy in a (large) grown man's body, I get that he might not be the sharpest tool/ murder weapon in the shed, but still, aside from his gross blue hands that are in dire need of a manicure, the J-man just isn't too scary.

What was good about Jason?  When his mask comes off, the makeup is really great.  I remember complaining about his face in an earlier movie, and it seems that the creative team here knew that 30 years down the line, Horror Buff would be complaining, because in this movie they really delivered.  I felt equally as shocked and horrified as Trish when the hockey mask falls to the floor, because boy is this guy ugly.  His 'death' scene towards the very end of the movie was also pretty horrific.

Something else I like about Jason is that he doesn't discriminate.  Sure, we've all seen a bunch of ruthless killers in our time, but every so often, an unstoppable killer turns out to have an Achilles' Heel which makes them not as scary.  Let's be honest, what is it that we want in a killer?  Someone or something ruthless, terrible, imaginative, totally insane yet calculated, and entertaining (is that so much to ask?)  Jason, technically a human, doesn't necessarily have a weakness other than the fact that he can only maintain a certain amount of injury before temporarily collapsing.  This is, however, the second time we've seen Jason sort of confused by visions of either his 'mother' or 'himself' before being subdued.  While this film pegs itself as the true end of Jason, we know that it didn't stay that way, and I think at this point Jason only gets crazier and less human.  Looking forward to that...

Until this point, Jason has stuck to teenage victims, give or take a few adults.  The good thing about this is that it doesn't matter if the victim is a jock or popular girl, innocent camp counselor or nerdy best friend, pothead or handicapped person, white or... just kidding, there is absolutely no diversity in these movies.  Regarding the no-victim-left-behind-act, take for instance the very, very random fat hippie hitchhiker (Bonnie Hellman) - yup that's a real thing.  Seemingly for no reason at all, BAM she's dead.  Was she even that close to the lake?  Methinks not on account the teens passed her in the daytime but didn't arrive to the house until after nightfall.  As the series movies away from Crystal Lake, I suppose the variety of Jason's victims will only grow.

Perhaps the biggest step forward that this film makes is the introduction of a child, a child that just so happens to be Corey Feldman.  Luckily it seems that Mr. Feldman received this role before developing his own famous, wise-guy personality, therefore leaving the character of Tommy Jarvis untainted.  Tommy represents a sort of innocence in the film although he is no saint as he is subjected happily to the debauchery of the teens next door several times.  Still, his youth and ingenuity allows him to tackle the whole Jason plight with a different angle - sympathy.  Weirdly skilled with mask-making, a certain homage to the hardworking makeup and special effects departments, Tommy effortlessly gives himself a makeover from heck in order to confuse Jason into thinking that he is seeing his younger, tortured self.  This gives the brother-sister Jarvis duo just enough time to stop Jason's rampage once and for all! ... or not.

Final critique:  This movie is pretty silly, and the negatives are more than apparent.  Still, if this couldn't kill the franchise from continuing, it must be for a reason.  I don't dislike this movie, it just simply wouldn't be my first pick from out of the Friday the 13th's I've seen to date.  This movie is filled with plenty of action even though it misses ample opportunities to create even more suspense and horror.  In its unintended farce, this installment epitomizes the B-movies of '80s horror and teen slashers.  Unfortunately, there are plenty of other ones out there that do the job better.  The Final Chapter boasts some gore, a few scares, a multitude of deaths that aren't milked enough to be memorable, and plenty of teen shenanigans.  It's pretty much exactly what you expect 4 movies deep in this iconic franchise.