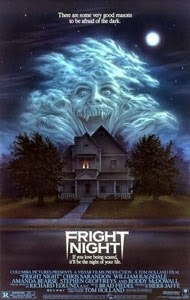 Plot overview:  Charlie Brewster (Ragsdale) is your average teenager, dividing his time between school, his girlfriend Amy (Bearse), and old horror movie marathons on TV hosted by Charlie's hero, the vampire hunter Peter Vincent (McDowall).  But when a mysterious (Sarandon) moves in next door and a rash of murders begin in town, will Charlie's love of vampire movies get the better of him?

This is one a true treat of a horror movie.  While it certainly isn't in the running for 'scariest,' the original Fright Night is a film I find myself going back to time and time again.  At face value you have your standard (although modernized for the time) tropes of a vampire flick, but aside from garlic, crucifixes, and holy water, this movie really does its own thing.  What's my favorite part about this movie?  It's not afraid to use humor, and no, I don't mean that corny humor that '80s horror made so infamous, but rather humor that we in the audience find ourselves laughing along to, even 30 years later.

The acting in this film, while perhaps a little slow at times, is interesting enough that we want to keep watching and entertaining enough that we enjoy watching.  One of the best things about this cast of characters is the diversity we're given: normal teenage girls and boys; formidable, supernatural adversaries; cowardly, aging TV personalities; aloof suburban mothers; and even nerdy underdogs turned demon.  William Ragsdale in the role of Charlie is pretty great, and aside from occasional hysteria, he's both an actor and a character that we find ourselves identifying with and supporting throughout the ordeal.  Chris Sarandon as Jerry Dandrige is tall, dark, handsome, and perfectly evil.  There is a sinister attitude and manner he carries with him at all times, both when charming the ladies or fighting the men.  From the first time I saw this movie years ago until now, one thing I haven't forgotten is Stephen Geoffreys as 'Evil' Ed.

There is something about this young actor's awkward face, sort of crazy laugh, and cracking voice that makes him hard to forget.  To me, Ed represents this sort of underdog; pushed aside by his 'friend' Charlie who is more handsome and more successful with girls (although that still may not be very successful).  Ed is perhaps dealing with a transition from childhood to adolescence, with his short stature, way of dressing, and the toys we see on the shelves of his bedroom.  After being bitten by Dandrige, Ed is given the opportunity to be more powerful, to become something greater than himself.  He is an easy target and welcoming victim, looking to improve his own situation by becoming a vampire himself.

I also really like Miss Bearse as Charlie's girlfriend Amy.  Amy is this pretty, hip, driven, and dependable teenager, and while she isn't very realistic (who would pay a stranger $500 to help out their [on the rocks] boyfriend who believes in vampires?).  Either way, I like her character and I like her acting.

This film is fun to watch.  We're not sure at all times where we're headed, but we're generally happy with where it ends up.  Aside from the extreme overuse of fog machines, the special effects are pretty great.  I personally think the brief scene with a werewolf gives us a better depiction of the mythical beast than An American Werewolf in London does (blasphemy??).  I'm not a fan of the sort of monster bat we see a few times, but other features (goo, slime, blood, bones, etc) are decent and in fact better than your typical '80s movie.  Speaking of which, I guess I watched some remastered version last night because the quality was actually fantastic.  Didn't look like an '80s movie at all... except for the spaceship of a motorcycle Amanda rolls up in at one point.

A couple brief things that surprise me: sure, Charlie's car gets wrecked (off camera), his fist gets squeezed tight a few times, there's some brief strangulation, and maybe one bat bite- but he doesn't get hurt that much otherwise.  Do we want to see him fight more or get beat up a bit more before saving the day?  Secondly, I am just so surprised that Peter Vincent doesn't dramatically die in this movie.  Am I a sucker for stereotypes, or does everybody get away just a little too smoothly in this movie?

Underneath our 'how to kill the vampires' plot, we have this really romantic, sexual subplot revolving around Charlie, Amy, and Dandrige.  One of my favorite scenes in this movie is the dance break - yes, you read right - at the club.  With a special '80s touch, not only are we treated to music and some tricky mirrors-without-reflections work, but there is this powerfully sensual exchange between the characters of Amy and Dandrige that leaves us loving the latter's evil just a little bit.  Historically, vampires have a certain power or control over women (especially the virginal ones), and the same is true in Fright Night.  At the beginning of the film, during a rather unromantic make out session (even Horror Buff doesn't leave horror marathons on while with his hypothetical girlfriend), we learn that Amy and Charlie still haven't slept together because Amy is nervous.  That is to say we can check off 'The Virgin' on our horror movie checklist.  Dandrige's interest in Amy, aside from spiting Charlie and aside from her unexplained similarity to the woman in a portrait at Dandrige's house, is pure vampire-on-virgin seduction.  Hot stuff.  Furthermore, this leads to a sort of masculinity crisis between the young Charlie and the suave older man.  So much sexual angst packed into these teenagers' lives!

Final critique:  This movie has something for everybody.  While rated R for your standard reasons, this movie practically has no gore or even scares, which makes it great to watch with friends who don't deal well with horror movies.  The likable characters, good acting, and fun plot line - not to mention '80s music and the terribly catchy "Fright Night" song that plays over the credits - makes for a charming, witty favorite in the horror genre.