GENERAL INFO:
Director:  Phillip Noyce
Studios:  Columbia Pictures, Universal Pictures
Starring:  Angelina Jolie, Denzel Washington, Queen Latifah
Tagline:  Two cops on the trail of a brutal killer.  They must see as one, they must act as one, they must think as one, before the next victim falls.
MPAA Rating:  R
Genre:  thriller, crime, drama, mystery, suspense, serial killer
Scare score:  C/C+
Rating:  B+ 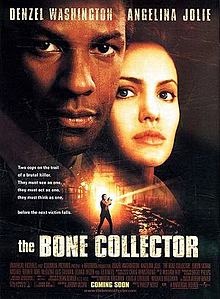 Plot overview:  NYPD cop Amelia Donaghy (Jolie) is the first responder to a disturbing crime scene where a homicide victim has been buried near some old railroad tracks.  Taking note of her instinctual documentation of the forensic evidence at the scene, famous forensics expert Lincoln Rhyme (Washington), who was left paraplegic after investigating a crime scene years earlier, chooses the novice Amelia to become his physical eyes and ears when the serial killer strikes again.  The killer, who surgically removes a bone from each of his victims, is imitating crimes from turn of the century New York City, but can Rhyme and Donaghy find out his true intentions before it's too late?

During the same lazy, adolescent summers when Horror Buff watched Darkness Falls about twice a week, The Bone Collector was also an obvious choice for a scary movie given the selection of VHS tapes on hand.  Aside from the big-billed names, this movie gives us an intriguing, gory, and gothic mystery that viewers can't help but try and solve before Rhyme's brain and Donaghy's brawn (and beauty... hey Angelina) do the job.  What is perhaps most fun about this movie, aside from the creative kills and the mystery that rapidly gains momentum, is just the horror behind the crimes- the lack of motives, the innocence of the victims, the seemingly random nature of it all.  Who knew the big apple could be so seedy?

In my opinion there's a pretty obvious touch of Seven here, and considering any crime driven, film noir movie, The Bone Collector doesn't give us anything stupendously new, except for one too many shots of Queen Latifah perplexing over puzzles or the given crime at hand that she either blatantly ignores or blatantly eavesdrops on.  Where would Rhyme be without Thelma (Latifah)?

Speaking of big names, who doesn't love some bed-stricken Denzel and the ingenue Angelina, still gorgeous with her debatable Brooklyn accent and manly disposition before making it big in Hollywood and across borders.  Both actors are cool in this movie although Miss Jolie seems young (Amelia is supposed to be nervous and hesitant in her demanding forensic task work as she simultaneously overcomes personal obstacles regarding love and acceptance.... ugh).  While no one delivers a poor performance, I found that this movie depends more upon action and mystery than serious acting.

That being the case, the kills are cool.  The amount of detail left in the clues, in the elaboration of the crime scenes, and in the murderer's general plot is creative and intriguing, even if what the Bone Collector is pulling off is pretty much outside the capacity of a human being.  Oh well, this isn't the first thriller that exists outside the realm of strict reality.

Final critique:  Not much more to say I guess; this is a new spin on otherwise old - but classic - film noir.  An able bodied novice, a paraplegic professional, some sexual tension, and an anonymous madman with too much time on his hands and a very useful taxi - this is the recipe that keeps the drama and mystery of this crime film cooking.  An enjoyable watch for most audiences; stay away if you're not into mild gore or thinking about the chilling possibility of what could happen any time you get into a cab.  Stick to Uber, kids.