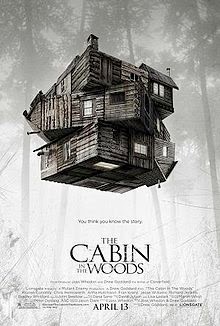 Plot overview: A group of five friends heads to a lonely cabin to spend a long, relaxing weekend. They could never imagine the horror awaiting them there.

This movie is great. I watched it for the first time last spring, but I never got around to blogging about it. Luckily I had plenty of free time this week to watch and enjoy it again.

I think that horror fans will find themselves pretty evenly split between loving and loathing this movie; obviously I'm one of the former just because I appreciate everything put into this movie. Cabin in the Woods flips horror on its head, putting an entirely new twist on the genre simply by recycling just about every archetype and trope they could think of, making stereotypes brand new.

While the audience is generally appeased with the right amount of college students having fun and then being terrorized and slaughtered, there are also some moments that we are treated as rather dumb viewers when 'the rules' need to be explained to us. I mean I get it, the egos of some horror buffs might just not be able to handle that— I'm not saying this Horror Buff can't, I'm just saying there might be some more sensitive fans out there. The fun thing about this movie, though, is that you're never entirely sure just what exactly is going on, and when you find out, you can't help but smile at this tongue-in-cheek approach to a horror movie.

The first time I saw Cabin in the Woods I thought I had made a big mistake when we were immediately introduced to two obvious archetypes— Dana (Connolly) and Jules (Hutchison). When smart jock Curt (Hemsworth) throws that football through a window but intellectual jock Holden (Williams) makes a perfect reception in the street, I almost couldn't handle it. This can't be so, I thought, so naive to the satire I was in store for. The small scares and the eerie atmosphere surrounding the cabin (which is, by the way, almost straight out of The Evil Dead) start quickly as we try to guess what exactly is the relation between the comic-relief scientists (Whitford and Jenkins) down in the lab, and our victims up in the cabin.

Given the fact that we are working with rehashed, reproduced, over-the-top tropes, each of our five principle characters still manage to charm and surprise us. Leading the way is our 'virgin' Dana, who is intelligent and rational. She is a heroine we root for and enjoy following throughout the entire film. Studly jock Curt surprises us with his extensive knowledge of Russian economics early in the film, and as time goes on (and runs out), we only become more familiar with what a great guy he is. His girlfriend is a beautiful if dumb, fun and endearing if loose, not-natural blonde. Then we have newbie Holden, who is also more than just muscle. Finally, rounding out the group, we have pothead and conspiracy theorist Marty (Kranz), who in his altered state also brings a large amount of sense to the film.

The plot, which is a new take on a hundred old plots, is intriguing and entertaining. The writers here were anything but afraid to play with everything horror fans love: bewitched items, creepy basements, conspiracy, sacrifice, and the end of the world, to name a few. As the initial horror at the cabin expands into something much larger, the apt horror fan should be fascinated at the sheer variety the movie then treats us to. One of my favorite things about this movie is absolutely this creativity (although not necessarily novelty) when we get to witness attacks and murders carried out by an army of nightmares. Some of the allusions in this film are to Hellraiser, The Strangers, Night of the Living Dead, Thir13n Ghosts, It, Alien, maybe Poltergeist, plus any werewolf movie, and then a general feeling of Friday the 13th throughout with a touch of Deliverance and Texas Chain Saw Massacre at the beginning. It's actually awesome.

Some qualms I had with this movie came directly from the satirical humor. All in all, sure, I liked the scientists down below. I didn't necessarily love the whole idea that some prehistoric gods under the Earth's crust depend on a very specific ritual of human sacrifice in order to not destroy the planet. That being said, I admit I'm a bad Horror Buff insofar as I've only had a very basic introduction to Lovecraftian themes and works. Also, when that very fact comes from the direct explanation by workers or especially Madam Director (Weaver), it frankly resulted as... well, almost stupid (those are tough lines to deliver seriously, even for Weaver). Still, the general idea of playing with the rules of horror movies makes this film both charming and fun to watch.

The scares are plentiful and pleasing, ranging from your standard surprises in the dark and things that go bump in the night to much more modern, high-paced monster kills. There's honestly a little bit of everything for everybody in this movie.

Final critique: I realize I don't have tons to say about this movie even though I think highly of it. It's not the best horror movie out there, but it's a pretty wonderful nod towards all of its predecessors in the genre. The acting is good, and the plot is really fun; in fact, I think fun is the best way to describe this movie. Audiences that easily scare certainly may not want to watch this film, but anybody looking for a good time with a movie that gives the horror genre a good name, spicing up old, worn-out plots and using them in a new recipe of horror, should definitely move this to the top of their list.