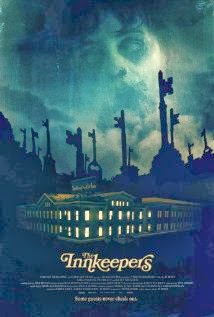 Plot overview:  College dropouts Claire (Paxton) and Luke (Healy) are the last workers left at the Yankee Pedlar Inn before its imminent closing.  With plenty of free time and only several guests to attend to, the young coworkers decide to investigate the hotel's haunted past.  But are they too eager to dig up the inn's legendary ghosts?

After enjoying the style and heart put into The House of the Devil, I decided to check out more Ti West, and I'm glad I did.  While this movie shared a similar, suspenseful structure regarding heavy build up over a long introduction, saving the action and delivery for the end of the movie, there were certainly more mature, well-played scares throughout.

I like the sense of reality that I have seen so far in West's movies.  By reality I don't mean that I believe in eclipse-worshiping satanic cults, but what I do mean is that Mr. West is young and when it comes to screenwriting he keeps his ears open to the real world: how people talk, phrases people use, modern jokes, and cultural relevance.  It's a breath of fresh air in any genre, but especially in horror.  On the other hand, given his characters' sense of actuality, there is also an undeniable nod to older horror movies, which West has clearly tried to achieve by means of cinematography and by establishing plots and characters that go deeper than exposed breasts and sharp kitchen knives.

Let's talk about the realism in The Innkeepers.  The combination of West's script and the acting here just had me feeling very happy, very in-tune with what was going on in this movie.  People love the paranormal, and a lot of amateurs and "professionals" alike spend tons of money on equipment just to go record white noise and sounds they can't explain (or, rather, choose not to).  People like Luke with too much time on their hands start up websites dedicated totally to horror that people probably don't even read.  I mean could you imagine.....?

More about Luke: maybe it was Pat Healy's appearance or the costume, but I'm sure I've met people just like him before (at least in aspect and attitude).  Otherwise, he was a very believable college dropout, faking paranormal sightings, sort of drifting through life with no purpose.

I'm wasn't sure how I felt about Sara Paxton at all times.  My initial reaction was that I had seen her before (no I don't mean in Aquamarine); she reminded me an awful lot of Nicholle Tom who is ten years her senior.  I was inclined to like her - and ultimately I did - although her overall performance as Claire felt a little too animated for me.  While I thought she was believable at first, little by little she became too naive, like a Disney character who also happens to be a teenage girl.  Luckily, even given her slightly exaggerated portrayal, good writing helps make Claire more realistic and enjoyable to follow throughout the film - and we get a lot of her.

Horror Fan doesn't watch Girls, but he was surprised to see a Lena Dunham cameo as the stereotypically realistic barista.  I'm not sure if she and Ti West are friends, but I did read an interview she conducted with him a few years back, so there's some professional history there.

Finally, as the only other actor that is really present in the film, we have Kelly McGillis as actress-turned-psychic Leanne Rease-Jones.  Her more mysterious role permits the audience to accept that the supernatural is something approved by the plot and not just concocted in the minds of Claire and Luke.

Like many a horror movie, The Innkeepers walks the line between what is real and what is imaginary without ever clearly showing truth from hysterical fiction.  Naturally, this can be a smart move because the audience then controls the power to decide, based on the movie's actions, whether or not the ghosts are real.

The horror in this movie was very interesting.  Again, it takes a while to begin, but then there are some truly pleasant scares.  First of all, the character of the Madeline O'Malley bride is a cute idea; who hasn't heard of the legend of so-and-so, who died because of you-know-what way back you-know-when?  It's an urban legend like every town in America probably has.  As she begins to appear, she isn't the most terrifying ghost we've ever seen and personally I think the whole bride bit is overdone.  Her scares are nice though; I liked the sit-up-straight-in-bed thing.  Spooky!

Much creepier than the bride is the old man.  Even when he first appears he is utterly eerie: his pale, flabby skin, his slow, awkward speech, and especially his black eyes.  Once we see him as a ghost it's even worse.

What I liked most about the concept of ghosts in this movie is whether or not they were in Claire's head.  Given the state of their indecisiveness, their dropping out of college, their dead-end jobs, and their general stagnation in life, it could be said that the true ghosts in this movie are Claire and Luke themselves.  As Leanne herself says, real ghosts - much like humans - just want to live.  That is what Claire wants although she is unsure of where to begin, and that's what Luke wants although he, too, has regrettably reached a temporary dead-end.  Both of these characters want to do something - create a hit website, record ghost sightings, maybe fall in love - but, much like many 20-year-olds, they are having a hard time taking that first step.  As for Madeline and the old man, or as for any ghost trying to make contact with humans, what do they want?  To be noticed.  To be important.  To truly live.  Leanne serves as a medium between the living and the dead here, showing to us that it's very much possible to be like dead when still alive, and still like alive when dead.

Final critique:  I liked this movie.  It's paced more slowly than the movies we're used to seeing today, but if you're into a realistic script and more developed characters instead of just slamming doors and ghosts sightings, then this might also be a movie for you.  As I read in an interview with Ti West, he isn't necessarily trying to make one big movie that will change a genre forever, rather he would consider a successful career as consisting of 50 decent movies that people will at least see and talk about, regardless of whether or not they liked them.  Well so far, I've seen two of his smart, based-in-reality horror movies, and I must say that so far, so good.  With a few big bangs, some creepy imagery, and masterful suspense, I'd recommend this movie to general audiences who think they can handle pretty scary ghosts.