My second 'book report' following American Psycho some time back. 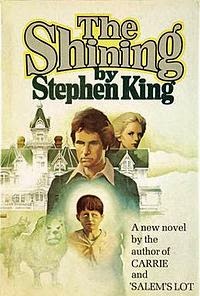 Plot overview:  Upon losing his job at a respected New England prep school, aspiring writer and recovering alcoholic Jack Torrance accepts a position as the winter caretaker of the Overlook Hotel, isolated amongst the peaks of the Colorado Rockies.  He brings his wife Wendy - who has stayed with him through thick and thin although she has contemplated leaving - and son Danny, a young boy with an incredible gift that allows him to read minds and see premonitions.  As the harsh, unforgiving winter sets in, both Jack's and the Overlook's terrible pasts come back to haunt the Torrance's in an attempt to make them eternal guests.

We all know the movie.  In fact, it's one of my favorites.  That being said, it was naturally very interesting to read the source of Kubrick's famous masterpiece.

I have never read Stephen King before, but I have to say I was really pleased with his writing style.  There were several obvious connections between this and other works of his that I'm familiar with via their film adaptions, as well as some standard King themes such as alcoholism, reality vs. imagination as well as individual perception vs. public perception (I find these four are often intertwined), and finally the capacity of the small or meek, that is to say, the supernatural ability of the underdog.

The Shining is heartily saturated with cultural references and great vocabulary.  While I couldn't help but picture the Overlook and the Torrance family as depicted in the movie, King leaves very little to the imagination in terms of his realistic and consuming descriptive style.  I was amazed at how each time I read, I, too, felt like I was trapped in some endless white winter.  After reading, I'd have to go outside to remind myself that it's spring and 75 degrees.  The book isolates its reader right along with the other guests of the Overlook.

As far as comparing and contrasting goes, it was interesting to see what Kubrick used, what he changed, and what he flat-out rejected.  Now that I'm familiar with both works, I would have to say the horror is different in the book than it is in the movie.  The movie depends a lot more on Nicholson's wacky performance (which we love), paired with only a handful of other scary images such as the twin girls, elevators full of blood, and that lobby full of skeletons which, in 2014, does nothing for us.  The book relies much more on the suspenseful horrors of the Overlook itself - which in the novel is easily the main antagonist, much more so than Jack - to make the characters (and the reader) paranoid.  I enjoyed how much the novel plays on reality and fiction, making us question what is real right up until the end.  An example of the Overlooks power: "The hotel was running things now.  Maybe at first the things that had happened had only been accidents.  Maybe at first the things he had seen really were like scary pictures that couldn't hurt him.  But now the hotel was controlling those things and they could hurt."

The biggest differences would have to be the lack of ghost personalities in the movie.  In the novel, the Overlook has stored up negative echoes and spirits of former guests that leave their stain in areas such as the Presidential Suite, Room 217, the elevator, and the bar.  While the movie version taps on a few of these references, focusing on a modified version of Room 217 and even briefly featuring previous owner Horace Derwent with special friend Roger the man in the dog costume.  The movie, however, invents the characters of previous caretaker Grady's daughters, and otherwise ignores the topiaries and roque court/ mallet.  I understand leaving out the hedges as creating such scenes given dated special effects would have been a terrible idea.  Furthermore, after reading the novel, I suppose I am upset that even the entire scene of Jack breaking into their quarters to try and kill Wendy and Danny -regardless of how iconic it has become - was entirely different.

And while in some hypothetical remake I would love to see more ghosts, it might be nice to see more of the human characters as they are in the book, talis qualis.  The book is absolutely focused on Jack's alcohol addiction, his inability to control his temper, and his alcoholic, abusive father.  While the Overlook ultimately does crack Jack, it is Jack - his weakness, his anger, his inability - that gives into the hotel's pressures.  In the movie, it seems much more like Jack becomes possessed or goes insane for little reason other than cabin fever.

Although I think Shelley Duvall does a good job of portraying the Wendy from the novel, she certainly falls away from prominence.  In the book she is much more than Danny's protector; they share a special bond, and she is eager and willing to sacrifice herself for his sake should the time come.  In the move, Wendy fights back and does well, but she suffers less so than in the book.  (Though I admit the domestic violence between Overlook-Jack and Wendy was incredible violent; reminiscent of Insidious: Chapter 2).

Then, of course, we have Danny.  Danny, the small key that sets all of the Overlook's horrors into action.  Listen to what King has to say: "If they got out of here, the Overlook might subside to its old semi-sentient state, able to do no more than present penny-dreadful horror slides to the more psychically aware guests who entered it.  Without Danny it was not much more than an amusement park haunted house, where a guest or two might hear tappings or the phantom sounds of a masquerade party, or see an occasional disturbing thing.  But if it absorbed Danny... Danny's shine or life force or spirit... whatever you wanted to call it... into itself - what would it be then?"

Danny Torrance in the novel is much of a key player than he is portrayed to be in the movie.  Since the majority of Danny's intellect and power is mental, it makes sense.  If not done cheaply, that hypothetical remake could rely some more on Danny's mental dialogue to assess the darkening situation at the Overlook from the outset until the film's climactic finale.

It's always interesting to read a novel and compare it to the movie.  While I'm usually a fan of reading the book before seeing the flick, sometimes you just can't help it.  The novel was admittedly freaky.  I think 'freaky' is the best way to describe the suspense and terror of this specific work: ranging from premonitions, to pure suspense, to decaying ghosts of ages past, to outright violence and the struggle to survive - all of which was pleasantly (or not) described in perfect detail.  I think the best thing the book boasts is its ability to draw you in to this bleak, isolated world of winter in the Rockies.  Jack's constant and profound introspection makes the reader question his or her upbringing, choices, and ability to hold themselves and their family together.  This is marvelously contrasted by Danny's innocence as a 5-year-old, simultaneously not understand adult emotions and perceiving much more of the gritty darkness and reality behind a smile or beneath the creaking floorboards.

Final critique:  I was very content with my book choice, and I flew through the 900-odd e-pages (I think on paper this book is around 500 pages) in less than three days; I was practically unable to put this down.  The book compels consumes the reader much as the Overlook consumes its guests.  If you love the movie, I recommend this book.  If you haven't seen the movie, read the book first, and then enjoy the film afterwards.  I guess all that's left now is the watch the miniseries from the '90s, which underwent far more supervision from the untouchable Stephen King.