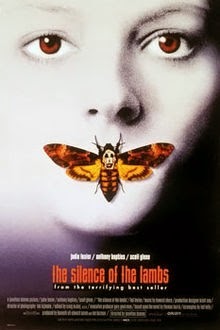 Plot overview:  FBI trainee Clarice Starling (Foster) has only dreamed of a successful career when Jack Crawford (Scott Glenn), the head of the Behavioral Science Unit, calls her in on a special mission.  Her task: to interview the infamous Baltimore-based psychiatrist-turned-cannibalistic serial killer Hannibal Lecter (Hopkins).  Unbeknownst to Clarice, Crawford's main goal is to use Lecter's expertise to help profile and then apprehend Buffalo Bill (Ted Levine), a serial killer who is kidnapping, murdering, and skinning women across the Midwest.  Will Clarice be able to use Lecter's knowledge to identify Buffalo Bill before he kills his latest kidnapping victim, or will Lecter get to Clarice's head first?
This is a really fantastic mystery/ psychological thriller that tips into horror just enough that I feel good about reviewing it.  I mean, the main character is called 'Hannibal the Cannibal' - how can't that be just a little bit scary?
This movie swept the Oscars winning Best Picture, Best Actor/ Actress, Best Director, and Best Adapted Screenplay, and all for a good reason!  This movie is creepy from the outset given the misty atmosphere of Quantico, later followed by the equally dismal and grey shots around West Virginia and Ohio.  The Silence of the Lambs combines crime, mystery, and both physiological and human horror into one slam dunk, spanning from one serial killer who is so smart and creepy we fall in love, another serial killer who may be even creepier, kidnapping, dead bodies, creepy bugs, and plenty of suspense.  Gee, horror fans, there's just something for everyone!
Let's talk acting.  Jodie Foster is great in this role.  As a child, I always confused her with Jamie Lee Curtis, but aside from being strong leading ladies, there isn't much of a connection there.  Silly Little Horror Buff.  Clarice is a driven, strong, and badass FBI trainee who does a perfect job as showing how strong she can be in a field dominated by men, yet she isn't afraid to show her human nature such as in the funeral scene or after first visiting Hannibal.  In fact, it is Clarice's personal side that interests Hannibal so much the movie itself is set into motion.  I love her rough southern accent in this movie; just enough twang to bring this crime/ horror to the heartland.
Anthony Hopkins.  Need I say more?  No, but I will.  From his haunting voice to weird gestures (especially the slurping noise he makes when talking about eating people), Hopkins portrays Lecter masterfully, switching back and forth seamlessly from refined, intelligent psychiatrist to flesh-hungry psychopath.  His character, highlighted by the shots and frames we often see him in (plenty of close-ups!) stay with us well after the movie has finished.
I also love Ted Levine's performance here.  His voice is another key feature in the horror; the way he tries to remain calm when dealing with his prisoner or with police, and the way that his psychotic nature shines through underneath.  Then, of course, who can forget his pathology... and ultimate goal for kidnapping and murdering hefty girls?  I thought there was a touch of this behind American Horror Story: Asylum regarding Bloodyface/ the decorations around his house.  One of the weirdest and most memorable scenes in the entire movie is of course of Buffalo Bill/ Jame Gumb dancing around in his basement to "Goodbye Horses" by Q Lazzarus.
This film isn't particularly scary although there are scenes that will get your pulse up and maybe you'll find yourself biting your nails a bit.  Aside from a fun plot that we try to figure out along with the FBI, the characters in Silence of the Lambs are dynamic and truly intriguing.
Final critique:  This hugely successful film has done our beloved horror genre a great favor by being scary enough to not fall strictly under crime.  The mystery is sure to keep the audience interested throughout the exploration of a crime that exists outwardly in society as much as inwardly within its perpetrators.  Not too scary, although there is a bit of gore; also, the psychological thrills are enough to creep out most audiences.