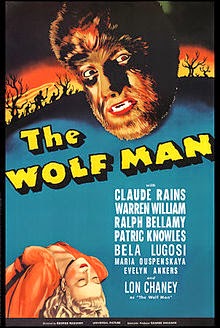 Plot overview:  Returning to his native town and familial home, Americanized British nobleman Larry Talbot (Chaney Jr.) accepts his position within his family, and shortly thereafter becomes smitten with local beauty Gwen Conliffe (Ankers).  As they go out one night to have their fortunes told at a gypsy caravan, a mysterious beast kills their friend Jenny (Fay Helm) and bites Larry in the process.  Over the next few days, the townspeople begin to fear what is loose in the woods while Larry begins to fear what is loose within himself.

Yes, yes, we all love Universal Horror, and there is nothing better than that black and white globe circling around under the overture at the start of these movies.  Was this the first werewolf movie following a century or more of popular werewolf gothic and romantic fiction?  It seems that it just might be, spawning countless 'sequels' as well as a 2010 action remake.  In today's world, who doesn't know what a werewolf is and who hasn't seen some representation of one in literature, TV, or film?  Well it seems we might just have Chaney and this 1941 film to thank.

Unfortunately, this movie kind of stinks.  I say that with a smile, as I watched it over the course of two nights before bed, the first time finding sleep to be more enjoyable.  The movie is too clean, to prim and proper '40s Hollywood to be truly scary, boasting a plot that is frankly strange, droll and predictable screenwriting, and acting that can be frustrating at times.

Lon Chaney Jr., walking in his father's (The Phantom of the Opera) footsteps (he's only booked as Lon Chaney for Pete's sake), gives us this large, bumbling, and creepy Larry Talbot, a tragic character made only more tragic but how dumb this movie is.  There was only one brief moment towards the end of the film that, in his character's desperation, did I appreciate Chaney Jr.'s acting.  He's too big compared to the other actors, too smiley, too creepily charming.  I thought it was a poor casting choice, aside from his name and his (and his father's) famed monster career.

Claude Rains (The Invisible Man himself) does a good job in this movie, in what is probably the least believable father-son pairing up of all time.  Not for one second could anyone believe that Chaney Jr. is Rains son, and I don't care what the mother looked like.  Just Hollywood getting some big names on the bill.

Then we have the lovely, charming, flirtatious, pure, tortured, desperate Evelyn Ankers playing Talbot's love interest Gwen.  There is some good acting here, although this role is exactly the same as any given [horror movie] love interest role from this time period.

Chaney Jr. as the wolfman himself prances around the fog-suffocated soundstage in the least scary way possible, given perhaps 6 or 7 minutes of screen time if that much, inducing absolutely no fear in today's audience in the shots of his face, that is, about 1/3 of his face pictured through the shadows tragically, sadly, like a lost animal.  Makeup is alright; not my favorite portrayal of a werewolf, although poor Chaney Jr. had to undergo hours and hours of having yak hair glued to him.  I can't even imagine.

My problems with this movie are many.  First of all, the movie takes place in England, and nobody speaks with a British accent.  Maybe this doesn't bother the average viewer but Horror Buff is picky about this things, and I mean how hard is it to set the movie in Massachusetts or Maryland if everyone is going to talk that way?  Secondly, how Talbot and Gwen fall in love is so, so beyond me. He PEEPS at her while she is DRESSING through a TELESCOPE?  There was absolutely no point in having a telescope or a refurbished attic in this whole movie except that it provided a way for Larry to eerily spy on this girl.  Sure, we've all seen what our neighbors are up to at one moment or another in our lives, but then Larry marches to town and proceeds to terrify this girl by telling her what kind of earrings she keeps on her vanity.  Dear female readers: if a guy ever does this to you, just call for help and keep your windows locked.

Otherwise, the whole movie is just various characters running about, confused and scared, setting traps or falling into them, accusing each other or trying to confess.  It's totally boring.

I did love the poem/ saying that everyone knew about werewolves, "Even a man who is pure in heart/ and says his prayers by night/ may become a wolf/ when the wolfsbane blooms/ and the autumn moon is bright."  This rhyme has appeared in all but two of the subsequent werewolf adaptations and sequels of this film.  I also liked that this werewolf transformation lore doesn't depend on the full moon in order to change the victim, although this staple would soon develop.

Final critique:  I love Universal Horror and all the original monsters that are sort of like the founding fathers of horror.  Love 'em.  That being said, films as old and no-longer-scary such as The Wolf Man are fun to watch with a bowl of popcorn on a given night of the week.  Just do not go into this film expecting to be scared or expecting a good plot, or good writing, or a good time.  Still a classic, still enjoyable in its costumes and scenery.  I wish there were more of the monster.