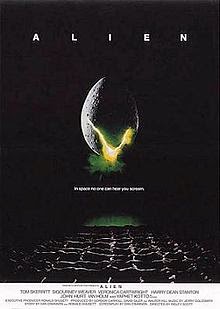 Plot overview:  In the future, the cargo-towing spacecraft Nostromo is returning back to Earth from deep space.  The crew members are awakened from their deep-sleep stasis when the ship's computer system, called 'Mother,' picks up what seems to be a distress call from the uninhabited planetoid LV-426.  The 7 crew members, led by Captain Dallas (Skerritt), descend to LV-426, and their small shuttle is damaged in the process leaving them stranded for at least a full day.  Several members venture off the shuttle and find a crashed alien spacecraft containing remnants of one race as well as countless eggs from another.  When one egg hatches, the terror begins.
Ask me for a movie that I truly love every time I watch it, and Alien will be way up there on my list.  While this movie is heavy on the sci-fi and somewhat light on the horror (this has got enough of an And Then There Were None feeling about it to pull it into the 'drama' and 'mystery' genres), it is the first installment of a famous and reputable film series that are appreciated to this day.
Can you imagine that Sigourney Weaver (a veteran by the time Cabin in the Woods rolled around) was a newbie in this movie?  And can you furthermore believe that she was treated disrespectfully by other cast mates for being a newbie?  This shocks me most of all because she kicks absolute but both in plot and in acting during this entire movie.  Warrant Office Ellen Ripley (Weaver) is a stern, smart mix of man and woman (not physically of course, as the ending of the movie flaunts), and perhaps the only member of the Nostromo who uses her brain throughout the film (don't let aliens on board.  Period.)

Even though they were apparently bullies, the other actors in this film do a swell job.  I love the small cast, the feeling of playfulness and also mistrust between the adults, especially when the pressure, claustrophobia, and loneliness start to set it.  Quick shout out to Veronica Cartwright in the role of Lambert, an equally tough space woman.  Hasn't she come a long way from The Birds and yet only a year earlier she starred in Invasion of the Body Snatchers.  All in all, the small cast makes for an exciting mystery filed with diverse personalities that add to the melting pot of tensions, even before a nasty, practically indestructible alien gets thrown into the mix.

I love alien.  Love the design, love the tongue thing that's actually another small head and mouth, love the different stages of growth/ evolution.  It completely baffles me how it manages to grow from being about a foot tall to becoming an enormous killing machine in, oh, say, 45 minutes.  Maybe that just makes alien all the scarier.  What's most interesting about alien in this movie is how little we know about it and how little we see it.  That's right, there are maybe two scenes that give us a complete idea of what alien actually looks like.  Even then, due to the film's dark nature, a lot is left to imagination.  This obviously has its plusses and minuses: there is plenty of suspense followed by large thrills waiting for alien to attack; then again, does the creature deliver?  There are a few scenes that would make us think so, but overall I would have to say the problem is resolved too easily.

The horror in this movie is slow and consuming.  It surrounds us, isolates us, penetrates us - just as it does the crew members and its victims.  There is a hunt, but the hunters are also the hunted.  There is a chase, but it's just as much frantic as it is planned.  Boasting one of the most memorable scenes in sci-fi/ horror (who's hungry?), Alien is filled with plenty of twists and turns that leave us craving and questioning more, just as the crew of the Nostromo questions more, only to find that curiosity kills the cat, even in the 2100s.

Final critique:  This is a great movie that ties together multiple genres such as drama and mystery, science fiction and horror.  While there is a generally pressured, scary feeling through the film, there are only a few actually scary (and also very memorable) scenes.  When Alien decides to do scary, it doesn't hold back.  I'd still easily recommend this movie to scaredy cats, as there is a truly interesting plot here supported by good acting and effects that surprisingly don't make me think it was done in 1979.  Really good movie; not the scariest, but super entertaining with some terror throughout.