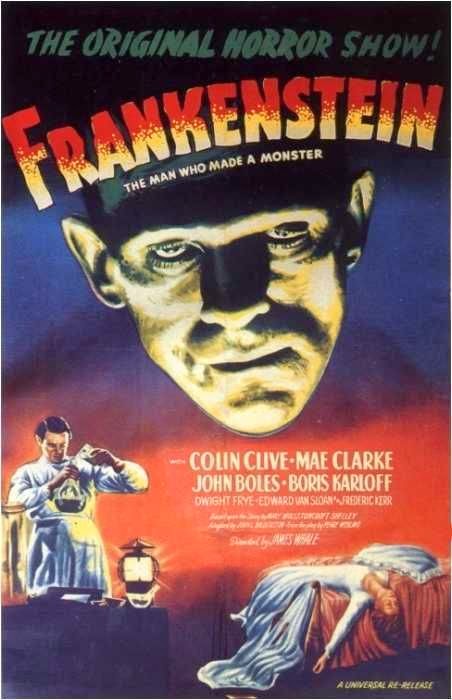 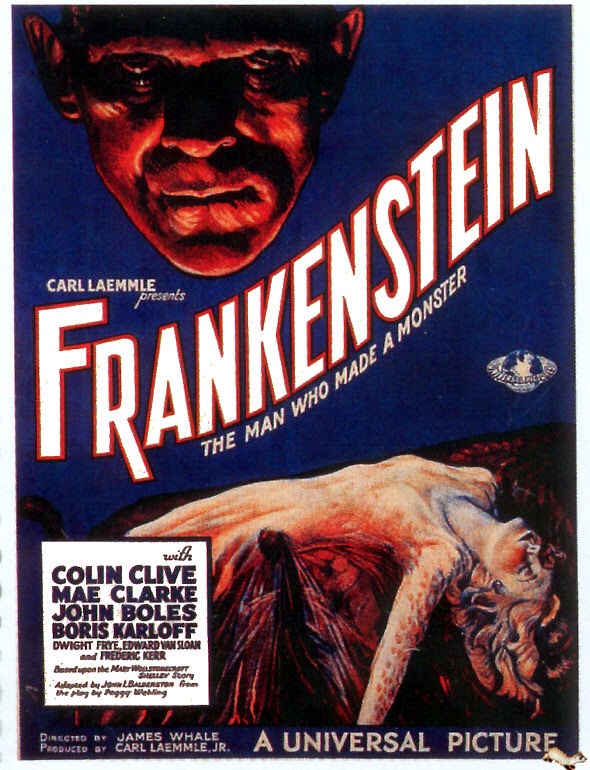 Plot overview:  Henry Frankenstein (Clive), an obsessive young scientist, will stop at nothing in order to perfect his experiment with reanimation.

I hope I don't sound ignorant when I say everybody on the planet knows who Frankenstein - or at least his monster - is.  In fact, most people confuse the two (cute rookie horror fans).  The original story, crafted by Mary Shelley for fun, shocked readers with its dark realism, its gothic and scientific ideas contrasted against the Romantic ideals of Victor Frankenstein as he tries to make fantastic strides within science and society.  While this 1931 isn't the first film adaption, I would say that it was (and remains) the most famous in its time, making various changes to dramatize the plot for cinema audiences.  I cannot believe that Mary Shelley is named in the opening credits as Mrs. Percy B. Shelley; that caught my eye immediately.

Acting in this movie is, not surprisingly, dramatic and overly stylized as it was Hollywood in the '30s.  Luckily, nothing is too over the top at least for my taste, give or take a few scenes between the hunchback helper Fritz (Dwight Frye, also in Dracula and The Invisible Man) - a role we usually know as Igor - and Frankenstein, who has been renamed Henry here.  Speaking of drama, I thought that his "It's alive!" bit could have been much more dramatic.  Clive's delivery of the very important line "It's alive!  It's alive!  In the name of God!  Now I know what it feels like to be God!" was lackluster (guess my opinion doesn't matter in Kansas or in other states where that line was cut lollzzz censorship).  All in all, I thought Clive did a good job representing Frankenstein's obsession for his work and then his consequential remorse upon seeing the monster.

Other funny players in this movie would have to be our old friend Edward Van Sloan (The Mummy) excellently typecast as - wait for it - a doctor.  In fact, he does a really nice job as the senior Dr. Waldman, a leading figure in [what town are they in?]'s science community that doesn't hesitate to give his voice of reason and warning to the eager Frankenstein.  I also enjoyed the performance by Frederick Kerr in the role of Baron Frankenstein, the family patriarch who perfectly if irritatingly represents the landed male aristocracy.  I thought one of the weirdest things about this movie was the way it ended, with the bustling, giggly maids (who I think just wanted to get their lips on more wine) bringing the Baron wine, resulting in his toast to a future son for the Frankenstein family.  While this has dark implications of the monster being like a son to the family, it's also just an ambiguous and oddly light-hearted way to end a film which I think for 1931 standards was pretty scary and horrific.

Let's talk monstahs.  We got good makeup here, not to mention the fact that Frankenstein's monster I think is pretty creative for the moment.  The fact that this monster has no name of his own makes him that much more important, being one of the first and finest examples of nameless terror: shapes, shadows, fear made manifest.  He's both human and not, having been reborn a monster; he consists of various people who had earned their right to eternal rest, but now, back in a monstrous, rotting, scarred form, the monster has a right to live.  This right is denied to him by those who forced him to come back into this world, by those who also deny him light and freedom (not for long!)  I thought Karloff (The Terror) was sincerely good except for when he made small animal sounds, which I did not like.  Makeup was really eerie here, and some of the first shots we see of the monster's face should send a little shiver down our spine.  One of my absolute favorite scenes was his interaction with the little girl Maria (Marilyn Harris) by the lake.  I can't believe that that was included in a film in 1931; I'm sure at least one person in the audience must have fainted.

While the film has its moments, it naturally falls under the 'too old to be scary' category today, but that's okay.  Compared to other Universal Horrors that I've reviewed already, I think that this is the scariest.

Final critique:  You should certainly check out this movie late at night along with a bowl of popcorn.  It's an important piece of cinema, especially within the horror genre, that has lasted quite nearly 100 years of cultural importance.  Can't wait to see what happens for the centennial.