Just when you thought it was over... 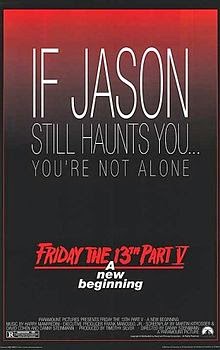 Plot overview:  Years after killing Jason, Tommy Jarvis (Shepherd) is a young adult still coping with his trauma.  As part of his recovery, he is sent to a halfway house for troubled young people.  Shortly after his arrival, however, a rash of murders begins in the local community.  Has Jason come back from beyond the grave?

We're going to keep this super brief.  This movie, while taking a huge step away from the formula of the first four films, continues the sort of thoughtless, reckless killings that the previous films have subjected us to time and time again.  Shockingly, this movie does not take place at Camp Crystal Lake, but rather in and around the Pinehurst Halfway House.  I think this change hurt the movie, leaving fans craving real Jason and not a mystery that leaves us unsure of what's happening.

We have a ton of possible suspects among the weird, diverse cast of characters.  Is it Tommy himself, gone mad?  Is it the terrifying cook (Vernon Washington) at Pinehurst, or the unnecessarily psychotic hick neighbors (Carol Locatell and ?).  How annoying were all of these people anyway?  We had "punks" dressed straight out of what Grease has taught me to believe the '50s were like, we have a huge segment dedicated to characters at a diner that have absolutely nothing to do with the plot, the totally unimportant arrival of Reckless Reggie's (Ross) brother and lady friend... the list goes on.  One thing that this movie did offer via such a random lack of plot was creative kills.  This franchise delivers in terms of fun, colorful deaths.

More than anything else, I hated the character Joey (Dominick Brascia).  That was almost as bad as the worst movie character of all time, Franklin from The Texas Chain Saw Massacre.  Horror Buff hates nothing more than Franklin, and Joey was too reminiscent in his sheer annoyance.

Final critique:  I watched this movie a few weeks ago and never blogged about it, so I don't remember all the details of what I would have originally said.  Friday the 13 Part V is just a new beginning of the same old weirdness: strange characters, senseless deaths, pointless plot.  That isn't to say that I didn't enjoy the movie, but it certainly would not be a pick of mine for scary movie night.