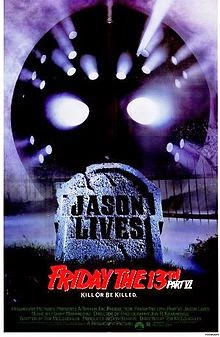 Plot overview:  Years after the events of the previous film, Tommy Jarvis (Mathews) has been released from his mental health institute, but he is still intent of making sure Jason (Graham) is truly dead.  Instead of burning Jason in his grave, however, Tommy unintentionally revives the masked killer, making him stronger than ever.  On the other side of town, which has been renamed Forest Green to help citizens and tourists forget the area's bloody history, summer is in full swing and a week-long children's camp is about to begin.  Will Tommy be able to convince the Sheriff (Kagen), his daughter (Cooke), and her friends that Jason is back and to cancel the camp, or will they simply write him off as being crazy?

Why did I enjoy this movie so much?  There are plenty of reasons.  First of all, like a rookie, when the scary music (I believe this is still Manfredini's score?) set in before the opening scene I jumped.  Yes, I know: total rookie move but hey, started off the movie in a good direction.  Jason Lives' (how funny would a musical concert version called Jason Live! be?) cast of characters, actual focus on some sort of plot (a first or second for the franchise??), awesome '80s soundtrack, and acceptance of inherent farce - all revolving around what I thought was a fantastic zombie Jason - made for a really enjoyable, and, at times, scary movie.

Ze cast of actors.  T-Jar is back and ready to kill Jason once and for all!  I liked Mathews in this performance as he was energetic, but the role itself becomes fairly repetitive and limited as all Tommy does is scream "Jason is back!" while nobody believes him.  Little bit of yawn city there, but a huge improvement from the mental case Tommy in Part V.  The very lovely Jennifer Cooke as the very badass Megan Garris added plenty of teen excitement to the film.  Who doesn't love the Sheriff's daughter?  But here, unlike in Halloween and Halloween IV, instead of being the prototype of a teenage, female victim, the Sheriff's daughter turns into a 'ready to rumble' protagonist.  Fun fact about our punky, comic-relief, kind of confusing character Cort (Fridley) is John Travlota's nephew, making him a part of a very interesting Hollywood family.  Other camp counselors, especially Renée Jones as Sissy and Kerry Noonan as Paula, add fun teen personality to the film.  In a fairly prominent subplot at Camp Forest Green, young Courtney Vickery also delivers what I guess is a cute performance as the little girl Nancy, who sees Jason and is frightened by him.

It was funny mixing our typical teenagers with a group of small children going to camp, as this changes a lot of the typical plot and humor that we've seen up until now.  Also for once the camp is actually being used as a camp, haha, so I suppose that makes things more realistic.  The inclusion of children - who, as we know of course from the rules are not to be harmed - cause two major things to happen within the movie: (a) directly resulting from the fact that we know they aren't going to get hurt, there is an added level of comfort in the film covered by a false pretense of nerves; the movie makes it seem like Jason wants to hurt the children, but we know he will not and (b) more humor.  My main example would be as Jason is about to attack the children's cabin once again and one boy turns to another to ask "So what were you gonna be when you grow up?"  Like really?  There were a few moments in this movie that we just had to pause to take in all the silliness.

Otherwise the deaths were colorful and creative as per usual, a nice usage of blood compared to not too much gore (save for skull crushing à-la-Michael Myers).  Our large cast is more concentrated this time around, given a few unlucky couples in the woods that find themselves face to face with Jason, aka Tony Goldwyn in what appears to be his first film credit?  Imagine that.

Final critique:  This entry is also short since I watched the movie a few weeks ago and didn't take good notes to help my entry.  Since starting the franchise, Part VI has certainly been my favorite to date, perhaps with the exception of the first or second film.  With bumbling police officers, a very '80s group of campers and counselors, a potentially crazy protagonist, and a zombie Jason on the loose, this movie has a lot to offer.  Definitely recommended.