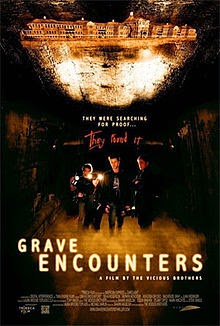 Plot overview:  A team of TV paranormal investigators, led by host Jerry Hartfield (Rogerson), decide to spend a night in an old mental institution to prove any haunting that might be taking place there.  Once they make contact, they aren't ready for what happens next.

This movie surprised me.  It isn't the greatest film out there, but it is two things for sure (a) entertaining and (b) pretty scary.  By pretty scary I mean this film has its moments that make us jump up in our seat, regardless of whether or not we saw the scare coming.  In fact, the movie often sets us up for a scare rather than dump one upon us.  When you see the scare coming a mile away and you can still appreciate it, you know it's done well.

I should first state that I typically hate 'found footage' movies almost as much as I hate moves that claim to be based on a true story (often the two intertwine).  Sure, Blair Witch put the whole first (third?)-person or character controlled camera thing à la mode and I'm not talking ice cream.  Although this movie is a found footage, with its reality falling somewhere within the realm of "sort of real," I thought it was interesting, and, furthermore, since it imitates a television show, we're not subjected to much shaky/running/broken clips.

I did like how, in its imitation of one of the countless paranormal investigation shows on TV these days, the movie pokes fun at said programming.  Do I like horror?  Yes.  Do I love ghosts?  All of them.  Do I watch those TV shows?  Absolutely not.  Why, you ask?  Because it's all build up and absolutely zero delivery.  Has anyone ever proved anything on those shows?  No.  And I'm not gonna' waste my time waiting around for the drama and fake scares when I could be watching horror movies or doing other things that involve people and being social.  Grave Encounters shows the team's sarcastic and even exasperated approach to trying to actually catch things on camera or make the show interesting, going so far as to pay off a hospital groundskeeper to lie and say he'd seen a ghost.

The ghosts lurking around the twisting and turning halls of the institution were pretty fun and decently creative.  There was a liberal usage of blood throughout the movie which was enjoyable.  Perhaps the best thing about this movie is the twist that takes place somewhat early on.  We know before going into Grave Encounters that the team is going to find ghosts.  Like that's clear.  What I wasn't expecting, however, was the fun twist and what resulted in the majority of the plot.  That was a very cool turn as far as Horrorland/ the Twilight Zone goes, giving the film new energy that almost lasts until the end.

Final critique:  I watched this movie over a week ago, so I'm only giving it a brief review.  Acting was favorable, plot was surprisingly interesting, and cinematography was what we expected from a "found footage"-inside-a-mental-hospital-at-night sort of movie.  I would absolutely recommend this movie to anybody looking for a fun scare any night of the week.  Those who scare easily should be wary.