A potentially monumental occasion: I think this is the first time The Horror Blog has reviewed a remake of a movie that I've already reviewed?  Given the remake-happy nature of the horror genre, this is more than certainly the first of many to come. 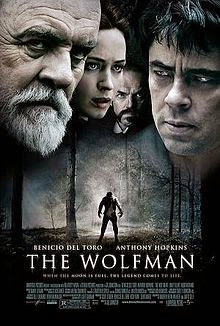 Plot overview:  Following the disappearance of his brother, Lawrence Talbot (del Toro), returns to his family estate in Blackmoor, England.  While there, he must deal with painful childhood memories as well as a very rocky relationship with his father, Sir John Talbot (Hopkins).  During this time he also grows closer to his late brother's fiancee, Gwen Conliffe (Blunt).  While trying to learn more about his brother's death from a group of gypsies, Lawrence is attacked by a wild beast that begins to plague the town, leading the suspicious locals to think that a terrible curse has been unleashed at Blackmoor.

As far as horror movies go, this is an action-heavy, gore-happy, high-speed thriller that happens to revolve around werewolf lore with several tie-ins to the original film.  It reminded me in many ways of Van Helsing (2004) and similar films that claim to be scary, but in reality are special effect-flaunting blockbusters based on tropes from within the horror genre.  If you are looking for a true horror movie, don't bother with The Wolfman; if you are looking for a somewhat scary thrilling action ride, definitely give it a try.

The Wolfman is romantic, filled with dark forests, dark villages, and dark manor houses (in general, it's a dark movie both in plot and in cinematography).  There is intrigue and silver bullets around every corner; a tragic overtone regarding family and love and, of course, the curse of the werewolf.

The monster in this movie is very well done.  The transitions are seamless, I enjoyed both the form of the body and even the face wasn't that bad.  It certainly surpasses An American Werewolf in London's beast, due both to the conception and modern special effects.  Speaking of this great werewolf film, the keen viewer will note the huge similarity of the chaotic London street scene which I'm sure The Wolfman borrowed.  It's really no wonder that this movie won the Oscar for best makeup given the impressive nature of both beasts, humans, and victims in the film.

Acting was pretty good in this film even though it relies more on action and thrills than dialogue.  Although from the get go I realized I detest Benicio del Toro's voice (it's extremely irritating), I thought he did a really good job as a dark, driven Larry Talbot.  Emily Blunt as the love interest Gwen was also endearing, charming, and proper.  The really good acting here goes to Anthony Hopkins, who manages to conjure up this menacing Sir John that we are wary of from the beginning.

Scares are not too severe in this movie.  Think of it as an action movie with tons of car crashes and shooting scenes: these things make us nervous and tense while watching.  This movie does the same thing, except instead of car crashes and fighting, there are just scenes of a super-fast beast killing victims.  The occasional slash and spilling of blood or guts might rouse a scare, but otherwise this is certainly not the scariest film in the werewolf genre by far.

Final critique:  I'm a fan of remakes, and pro the whole remake classic movies movement.  That might sound blasphemous, and I don't think every movie merits a remake, but some incredible classics deserve to be modernized either in plot or production and brought to today's audiences that doesn't know how to dig past the year 2000 when looking for a movie to watch.  With a big-billed cast and the ability to flaunt great special effects, it should come as no surprise that The Wolfman turns into an action remake, filled with high-speed fight and murder scenes, a healthy amount of gore, some romance, and an extended plot that explores more psychology than the original film did.  If you're looking for a true horror movie tonight, pass over this one, but don't forget about it for another time when you want a fast-paced, monster-based thrill ride.