Not to be confused with Alien, although it is the sequel. 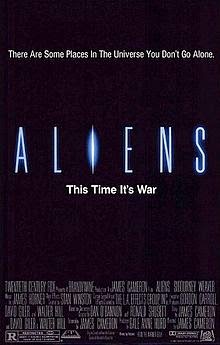 Plot overview:  Following the events of the first film, Ellen Ripley (Weaver) awakens from her stasis after fifty-seven years.  Having expected to only sleep for several weeks, Ripley finds the world, or indeed, the universe around her to be quite changed, with the happenings aboard the Nostromo called into questioning and her reputation smeared as she is stripped of her space piloting license.  To add insult to injury, Ripley also learns that the planet where they first found the Alien eggs is now a terraforming colony under Weyland-Yutani Corporation.  Desperate to prevent more deaths at the hands or claws of the monstrous Aliens, Ripley agrees to return to LV-426, where the organization has lost contact with the terraforming colony.  Will Ripley and a team of Marines be enough to stop a potential Alien outbreak?

Super short entry here.  Watched this movie immediately after I watched Alien, so it's been a while.  In my book, this is much more of an action movie, filled with a sort of Vietnam-in-space feel plus a premature '90s sense of style and humor, all of which dulls the sense of terror.  Sure there is plenty of suspense plus a few jumpy moments (it's the Alien franchise, after all), but the movie is not especially frightening.  Even the C- might be too high of a rating.

Our cast of characters is highly entertaining here, filled with some of James Cameron's favorites, making this movie even an outer space prequel to Titanic or a more hostile Avatar.  Aside from Miss Weaver (so much love), my personal favorite was Bill Paxton as private Hudson.  He is the original bro in his tough-talking, rough-acting, curse-loving, gun-happy role; equal parts action and comedy.  Feminists rejoice in the Saturn Award-winning performance of Jenette Goldstein as private Vasquez, but other activists may frown upon the casting the white actress in the role of a powerful and gun happy Hispanic Marine.

The interesting thing about this movie is its further exploration of the Alien universe, providing us with more explanation about the Xenomorphs, how their race works, and if the Corporation has any influence in their breeding and fate.  There is most certainly sinister commentary here regarding corporatism and capitalism, which monetary gain held over human safety.  Among other societal critiques, Alien also touches on sexuality, rape, gender roles, and politics in general.  Racy!

Sitting here a month after watching the film, my honest opinion is that there are memorable special effects and memorable characters, but no scares come to mind.  The trip to another world with futuristic technology is always fun for those who love a touch of sci-fi in horror, but otherwise, aside from some suspenseful chase scenes and a good battle or two, the first film boasts a more true sense of terror.

Final critique:  In a long line of horror and sci-fi hits, Aliens simply remains overshadowed by the film that started it all.  Filled with action, cursing, gun violence, and good special effects, this film is certainly not the scariest in the bunch.  Definitely entertaining with some creative Alien nests, cocoons, and beasts themselves, but not too frightening overall.